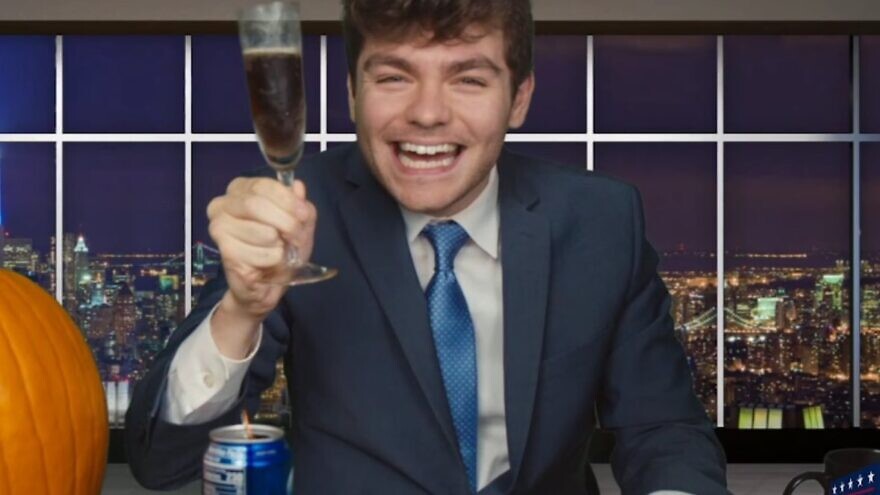 (January 3, 2023 / JNS) Holocaust denier and white supremacist Nick Fuentes announced Monday on his telegram channel that more than 1,000 students have signed up for a group dubbed “Students for Ye” within two weeks.

Fuentes asserted that his efforts on behalf of the embattled hip hop mogul Ye (formerly Kanye West) were “all in service to Christ” and begged for others to “PUSH TO 2,000 WITH US.” The antisemitic activist described these initial followers as “the first believers in our grassroots movement to support a potential YE24 campaign.”

To grow his movement, Fuentes linked to a Google doc asking for names and if those signing up were in college. The document stated, “This is a survey to collect contact information of college students supporting Ye, formerly known as Kanye West. If there is a presidential campaign, YE24 will receive this information.”

The “Students for Ye” telegram channel, launched Dec. 5, currently has over 1,200 subscribers. Its corresponding Twitter page now has 1,955 followers. A video titled “Ye24” on the “Student for Ye” Telegram channel proclaims “burn everything” and features both a flaming cross and the Constitution engulfed in fire.

“Students for Ye” also promoted the frequently unreliable reporting of far-right provocateur Ali Alexander, who said on Dec. 19, “Most popular word at TPUSA’s ‘Amfest’ conference based on what I’m hearing from attendees, speakers, and reporters: ‘YE.’” Alexander is rumored to be running Ye’s campaign and was permitted to tweet from the rapper’s Twitter account before owner Elon Musk shut it down following the posting of a swastika. Recent reporting has revealed that former President Donald Trump insisted on allowing Alexander to speak at the Jan. 6 Capitol riot, in spite of objections raised by the president’s advisers.

According to an article featured on the “Students for Ye” channel, the leaders of this student group include Daniel Schmidt as national chairman, Luke Hogan as national vice chairman and Sean McCrossen as social media lead. Schmidt denounced Trump and aspiring Speaker of the House Rep. Kevin McCarthy (R-Calif.), and told National File, “What America needs more than ever is a fearless, visionary leader who puts both America and Christ first: Ye has demonstrated he can be that leader.”

Much like Fuentes, Hogan expressed his support for the antisemitic rapper in explicitly Christian nationalist terms: “Americans worship Christ every Sunday. To have a proper republic, our leaders need to honor that fact and reflect it in our laws. Daniel, myself, and the hundreds of other Students for Ye members believe that Ye is the person to bring these ideas to fruition.”

Fuentes and Ye previously made international headlines when they were welcomed to dine with Trump at his Mar-a-Lago resort, an act condemned by the former president’s Jewish supporters but for which he has yet to issue an apology. Ye has seen his fortune collapse since beginning a wave of antisemitic and pro-Hitler rhetoric in October.