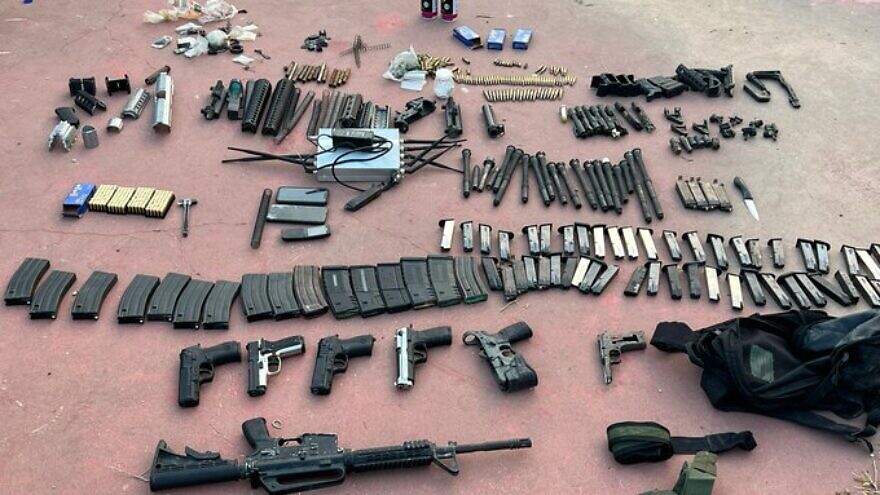 A cache of weapons and ammunition captured during an Israeli raid on a terrorist hideout in Nablus, on July 24, 2022. Credit: Israel Police.
Spread the word.
Help JNS grow!
Share now:

(July 24, 2022 / JNS) Two Palestinian gunmen were killed by Israeli forces on Saturday night during a battle that erupted in Nablus during a counter-terror raid, the Israel Police said on Sunday. There were no Israeli casualties or wounded.

The casualties were identified by the Palestinian Authority’s official WAFA news agency as Mohammad Bashar Azizi, 25, and Abderrahman Jamal Soboh, 28.

The incident began with Israel Police counter-terror unit and Israeli soldiers, acting on Israel Security Agency (Shin Bet) intelligence, surrounding a number of armed terrorists who had holed up in a home near Nablus’s Kasbah area, according to the IDF.

A gun battle broke out and raged for hours, with the Palestinian terrorists firing live ammunition and hurling explosive devices at Israeli forces, who returned fire. During the exchange, “a number of terrorists were killed,” the police said in a statement.

“A number of additional means” had been used to engage the gunmen, who were both inside the home and on the rooftop, the statement continued.

According to Palestinian media reports, Israeli forces launched shoulder-fired missiles during the operation.

During the operation Israeli forces also came under fire from outside the building, according to police. Counter-Terrorism Unit personnel returned fire, and a number of hits were identified, the statement continued.

At the end of the gun battle, security forces entered the home and scanned it, seizing large numbers of weapons and explosive devices.

According to WAFA, ten Palestinians were wounded, one seriously, during clashes that erupted in the area in the aftermath of the Israeli raid.

“[The] IDF, ISA and Israel National Counter-Terrorism Unit forces conducted counter-terrorism activities against terrorists in Nablus overnight. These were terrorists who recently carried out a series of shooting attacks. During the operation, the terrorists opened fire from rooftops and alleys in the Nablus souk,” said Lapid.

“Our fighters responded quickly, efficiently and with precision. Several terrorists were killed in the exchanges of fire and several more were wounded. Considerable weaponry was seized.

“I commend the security forces for their efficient and successful operation. The policy of this government is clear: We will not sit and wait for Israeli citizens to be attacked. We will go out and take the fight to the terrorists wherever they are.”