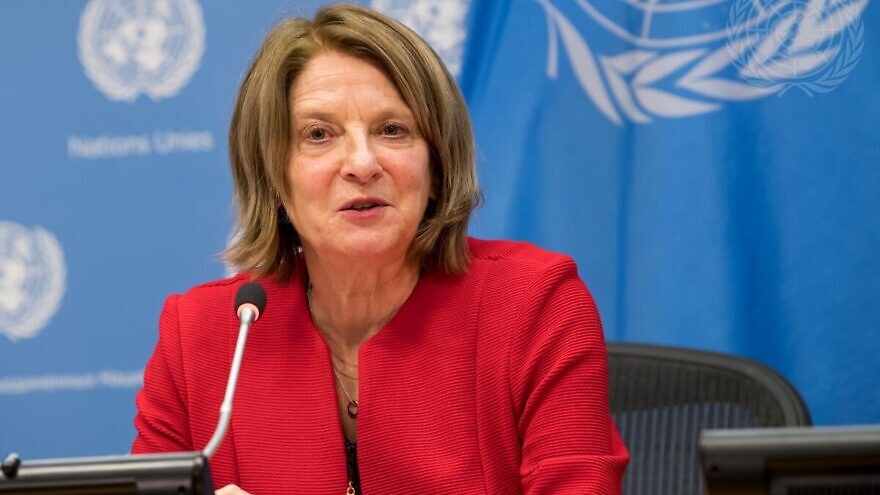 (January 18, 2022 / JNS) She helped lead the backchannel effort to get Israeli and Palestine Liberation Organization leaders in the same room to hash out an interim agreement that was to serve as a basis for peace. Nearly 30 years later, the Oslo Accords have been seen alternately as historic or tragic, with plenty of blame—or credit, depending on one’s perspective—to go around for the agreement’s failure to lead to a durable political settlement.

But Mona Juul, now Norway’s ambassador to the United Nations, told JNS that she is determined not to let the prospect of peace die. And she’s using her pulpit this month as president of the U.N. Security Council to focus on the conflict.

“We think from the Norwegian side, absolutely that the situation on the ground between the Israelis and the Palestinians, 30 years after the Madrid Conference, merits increased focus on the need for the Israelis and the Palestinians to get back into the negotiating table,” she told JNS in a discussion at the Norwegian Mission to the United Nations. Juul was referring to the 1991 bilateral Israeli-Palestinian negotiations in Madrid that eventually led to the exchange of letters and the subsequent, secretive Oslo Accords discussions that Juul facilitated, together with her diplomat husband, Terje Rød-Larsen.

“It’s obvious the two-state solution is the only solution, and there are prescriptions on what that solution could look like. What is lacking, of course, is the necessary political will on both sides to compromise and to find that common solution,” she added.

What is obvious is that Juul is still serious about pursuing peace, even if the road map on how to get there isn’t any clearer than it was three decades ago.

On Wednesday, the Security Council will hold its quarterly open debate on the Israeli-Palestinian file. Juul upgraded the meeting to the ministerial level, and the discussion will be chaired by Norway’s foreign minister, Anniken Huitfeldt. Back in October, U.S. Ambassador to the United Nations Linda Thomas-Greenfield chided the Security Council for placing a disproportionate focus on the Israeli-Palestinian conflict in comparison to other regional issues, and for the fruitlessness of the regular debates, which quickly descend into a pattern of accusations and counterattacks. 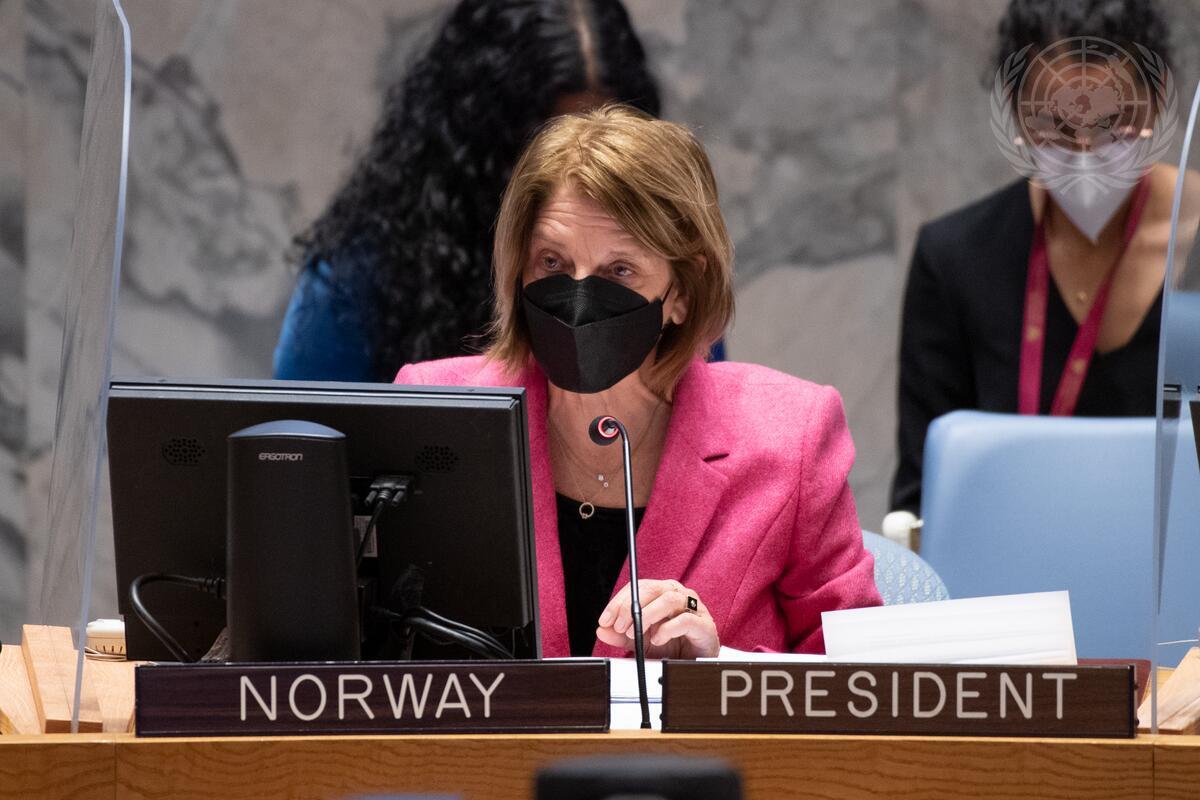 Still, Juul intimated that she has gained some measure of optimism through recent developments, including the December visit of Palestinian Authority leader Mahmoud Abbas to the home of Israeli Defense Minister Benny Gantz, along with additional agreements on building permits, work permits and discussions on economic initiatives.

“I am fully aware of all the challenges [on obtaining consensus on the issue at the Security Council], but we are not giving up the trust that we have in both sides to get back to the table because this situation, as it is now, the status quo is not sustainable in the long run, and we think that only a two-state solution can really solve the conflict,” said Juul, despite Israeli Prime Minister’s public and repeated proclamations that a Palestinian state will not be formed on his watch, coupled with Israeli Foreign Minister Yair Lapid’s statement that the government will not pursue a political settlement, per the governing coalition agreements, when he is scheduled to rotate into the prime minister’s chair in late 2023.

She added, “I’m not going to characterize the views of neither the Israeli nor the Palestinian government. They are very capable of expressing themselves. I don’t think we have ever been in a position to push too hard, but we are consistent in our wish for a negotiated settlement.”

Palestinians need ‘to do what is necessary’ to advance peace

The core areas of disagreement—borders, settlements, Jerusalem, the Palestinian so-called “right of return”—remain after all of these years. Interestingly, Juul said in a recent interview with The New Arab that she does not think settlements are an “insurmountable issue.”

“Our position, when it comes to settlement, is very clear—that we think that they are in contradiction with international law, but we have to be pragmatic when we are looking at ways of finding a solution. A solution is a compromise, and I have the trust in the parties that there will always be a way to be found also on this contentious very contentious issue,” she told JNS.

Meanwhile, Norway has twice cut funding to the Palestinian Authority over the last year for issues related to incitement and violence against Jews, including in the school curriculum. Juul said it is an example of Norway holding the P.A. to account, insisting that it uphold its end of the bargain when it comes to the pursuit of peace.

“I think we are continuing to send messages to both sides, including to the Palestinian Authority, on the need for them to do what is necessary in order to get back up to the table. And as a coordinator of the donor community, we—together with other countries—require that the Palestinians do their part to reform within the Palestinian Authority, and we are very clear with them about them. But we maintain good relations,” said Juul, telling JNS that she is pushing both the Israelis and Palestinians equally, despite Norway’s positions in the Security Council, which are often much harsher in its assessment of Israel’s conduct.

As Juul indicated, Norway, which serves as the Security Council pen-holder on the Israeli-Palestinian file, coordinates donor assistance to the Palestinians, including to the much-beleaguered United Nations Relief Works Agency (UNRWA), the U.N. agency that handles Palestinian refugees and their decedents. The agency has been accused of perpetuating the conflict as well as promoting anti-Semitism and incitement.

“I think the refugee issue is one of the final-status issues that also needs to be resolved in order to have a two-state solution. There have been talks; there have been efforts going on for almost 30 years in order to find a solution. We know that there are also solutions to be found on this issue. I’m not in a position to describe to the Palestinians or the Israelis to tell them how this could be found, but I think it is the only way forward is to get them together and see if they could find a solution,” she said.

So, three decades in, Juul will keep pressing, and her country will attempt to play ringmaster in the Jan. 19 Security Council debate on the issue, which, very much like the peace process itself, continues to produce the same result.

What has changed recently is the signing of the Abraham Accords in September 2020 between Israel, the United Arab Emirates and Bahrain. Thomas-Greenfield intimated that more could be accomplished for peace and security if the Security Council placed an emphasis on the disastrous situations in Syria, Lebanon and Yemen; the fragility of Iraq; and the threat of Iran—as opposed to continuing its laser-focus on every clash or construction plan in Jerusalem. Juul seemed in agreement that the Abraham Accords is beneficial, but largely as a tool to redouble efforts to solve the intractable Israeli-Palestinian conflict.

“We are pushing for that [an expanded Israeli-Arab circle of peace], and we pushed for the normalization agreement with the United Arab Emirates and other Arab states. We have said very much that we welcome those, and we think it could be an opportunity that has to be used,” she said. “So far, we haven’t seen much of that, but I really hope that can be used because we need a solution to this Israeli-Palestinian conflict and we need the support from the region on such a solution.”