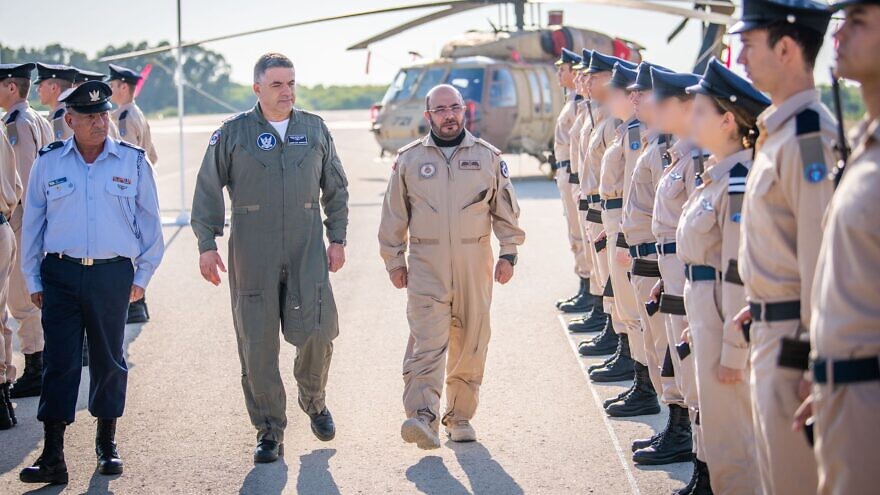 The fifth in its series, this year’s Blue Flag drill is the largest and most advanced exercise hosted by the IAF yet, and is taking place across southern and central Israel.

Eight countries—Israel, the United States, Britain, France, Italy, Greece, Germany and Italy—have brought a combined 70 aircraft to the drill and 1,500 personnel to Uvda Air Force Base north of Eilat, where the exercise is based.

The countries taking part flew together in combined teams against IAF “red teams”: Israeli F-16 and F-35 jets that simulated the enemy. The IAF simulated a number of advanced Surface-to-Air Missile (SAM) threats from the ground as well.

Both Israeli and Italian F-35 jets took part in the exercise, making them the only ones with fifth-generation aircraft in the drill. Blue Flag included offensive and defensive training scenarios.

Brig. Gen. Amir Lazar, the head of the IAF’s training and doctrine division, said on Sunday, “This is the most significant international exercise and deployment to Israel to date.” 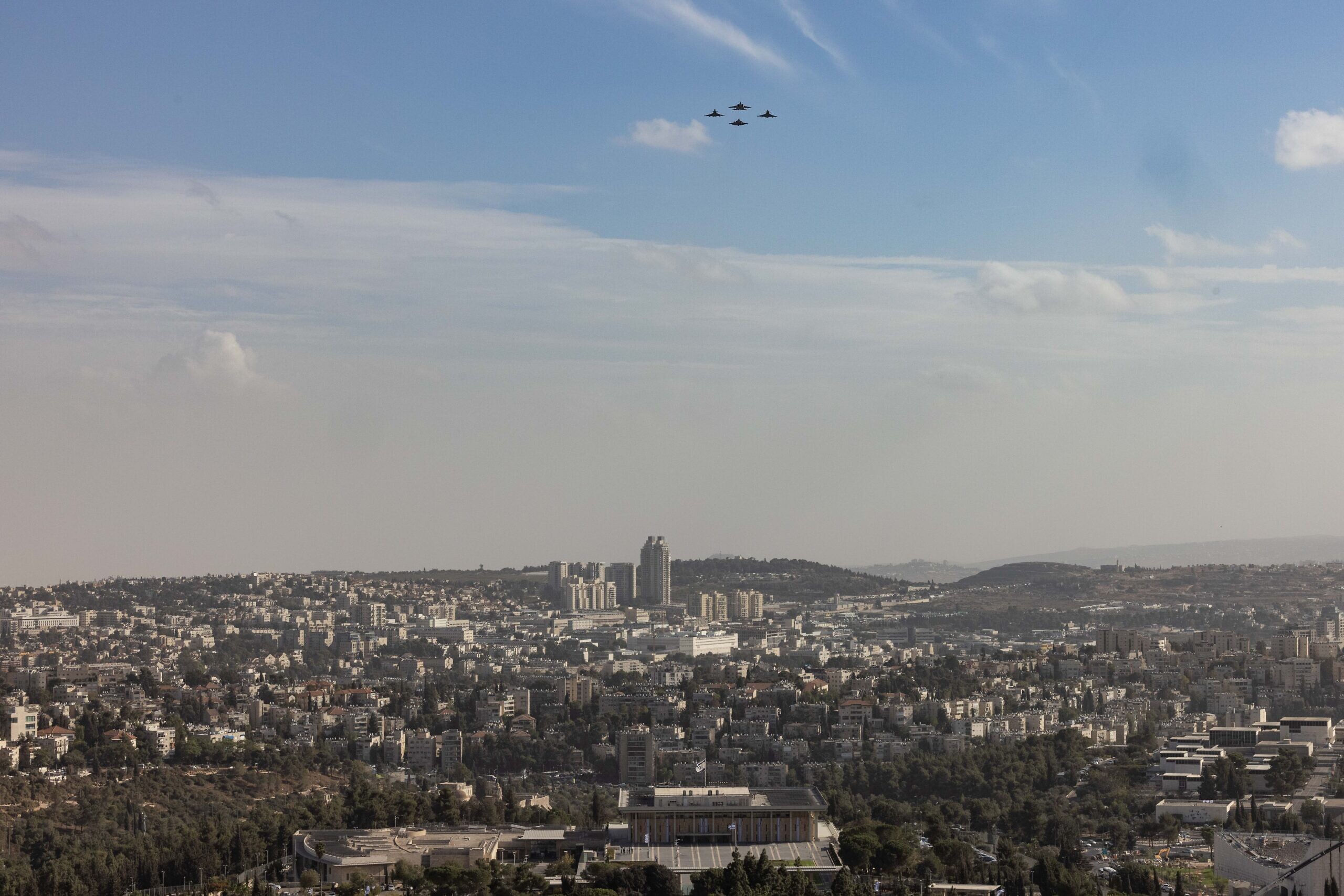 Israeli Air Force and German fighter jets fly over the Knesset in Jerusalem on Oct. 17, 2021. The display marks the cooperation between both countries and marks the beginning of the international Blue Flag military drill. Photo by Nati Shohat/Flash90.

‘Training for a wide range of emergency scenarios’

The fifth in the Blue Flag series, the goal of the exercise was to simulate challenging combat scenarios and joint coalition flights in the most realistic manner, though it also had a wider impact on strategic international relations. The IAF views the exercise as a bride for regional cooperation, stability and advancing shared capabilities.

Preparations have been occurring for 10 months, initially through online communications between the participating countries and later via representatives arriving in Israel to build training scenarios.

In a statement, IAF Commander Maj. Gen. Amikam Norkin also addressed some of the real-world challenges that Israel faces and that helped shape the exercise.

“The Middle East is a complex arena, which changes at any given moment,” he said. “The threat to the State of Israel comes from different arenas—the Gaza Strip, Syria, Lebanon, Iran and more. The challenges we face are increasing, and we make sure to be one step ahead of the enemy. The IAF is constantly training to be ready for a wide range of emergency scenarios.” 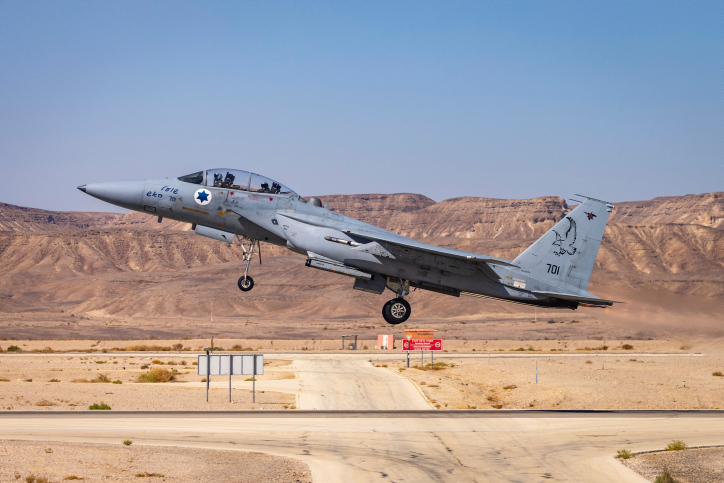 An Israeli F-15 during “Blue Flag” international aerial-training exercises at the Ovda airbase in southern Israel on Oct. 24, 2021. Photo by Olivier Fitoussi/Flash90.

Addressing the exercise, Norkin added that “we fly in a joint coalition in limited airspace, wing to wing with the partnering air forces. The joint training allows us to learn from the various air forces participating in the exercise and prepares the IAF personnel for real-time scenarios in order to succeed in our mission—maintaining the security of the State of Israel.”

During the drill, the IAF introduced its version of air superiority to the scenario, defining the mission as defending one’s own home—not a mission that most European air forces are accustomed to.

“Aircraft infiltrating our air space need immediate interception, or they will bomb the home city,” said an IAF source. “This is a different mentality when one defines the mission as having a few seconds to defend your home from an aircraft on the way. The risks one takes are different in that scenario.”

The exercise also included a simulated war over several days, involving missions into “red land” (enemy territory). Should teams lose assets, such as ammunition depots or ground controllers, it will affect their performance in the following day of the simulation. The goal was to defeat the enemy within three days against a dynamic, thinking and mobile adversary. 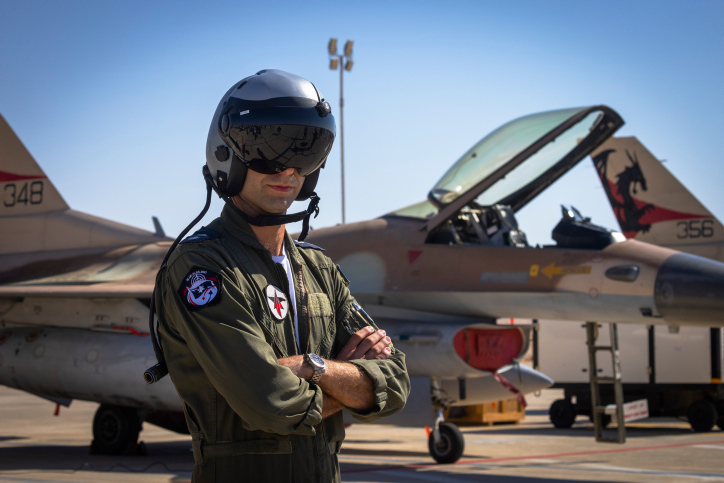 An Israeli air force pilot speaks with the media during “Blue Flag” international aerial-training exercises at the Ovda airbase in southern Israel on Oct. 24, 2021. Photo by Olivier Fitoussi/Flash90.

‘An increase for the entire fleet’

Capt. Scott Wawrzyniak, a U.S. Air Force F-16 pilot based in Germany, said: “This has been great training with lots of countries taking part. We are here offering our tactical solutions and learning.”

He noted the speed, precision and types of weapons simulated in the exercise.

An F-16 can benefit significantly from having an F-35 on its side by receiving “data passage” on threats from the newer aircraft and their more sophisticated ability to gather information from sensors. “It’s an increase for the entire fleet,” he said.

Indian fighter-jet pilots told JNS that the exercise provided them with “good training value,” adding that the combination of fourth- and fifth-generation fighters is something they have yet experienced back home. 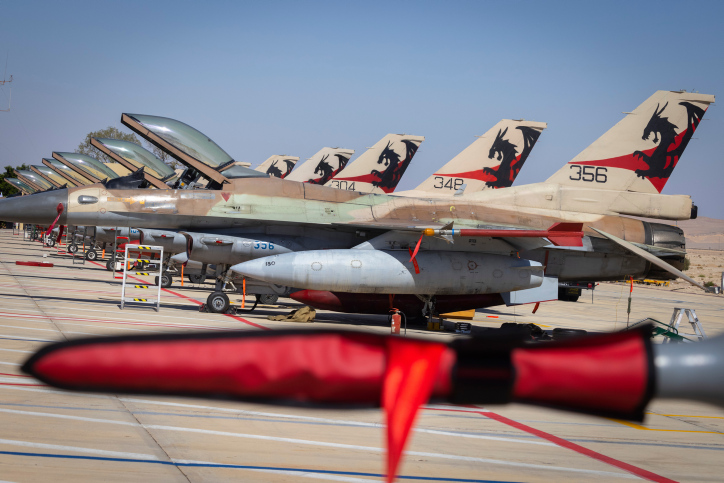 Warplanes during “Blue Flag” aerial-training exercises at the Ovda airbase in southern Israel on Oct. 24, 2021. Photo by Olivier Fitoussi/Flash90.

Capt. A, an IAF F-35 pilot, said the Israelis adopt techniques that it sees and likes from other air forces. He described his fifth-generation aircraft as a “breakthrough step forward,” adding that the entire air force is marching ahead due to its arrival.

Speaking to Italian colleagues who fly the same aircraft revealed “many similar experiences,” he told JNS. “We are learning tactical lessons, which are broad,” he added.

In 2022, the IAF is scheduled to hold an internal Israeli exercise with multiple Israeli squadrons, as well as take part in international exercises overseas.