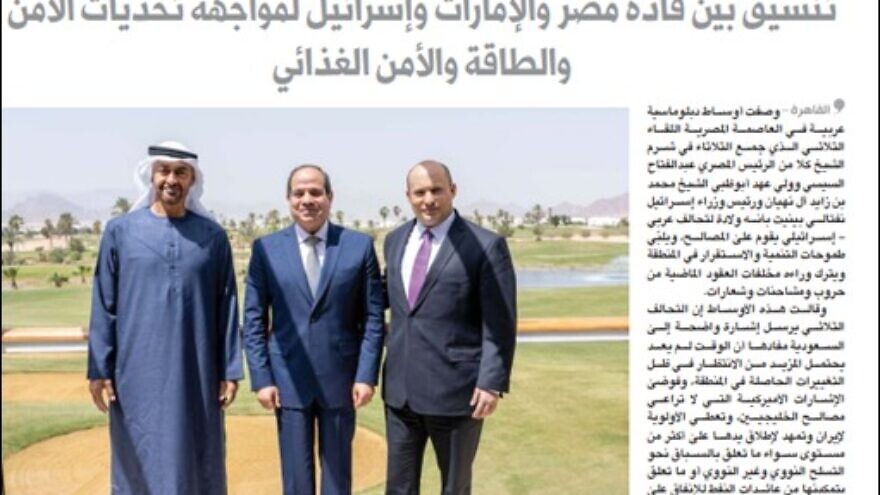 (March 24, 2022 / JNS) The summit held this month by leaders of Egypt, Israel and the United Arab Emirates in the Red Sea resort of Sharm el-Sheikh was described by a recent article in the London-based Emirati daily Al-Arab as giving birth to an Arab-Israeli coalition.

According to a report by the Middle East Media Research Institute (MEMRI), the paper said this coalition begins with economic and commercial cooperation among the three nations but is likely to develop into a security and military alliance as well. (Commercially, Israel and Egypt announced on March 16 that they are opening a new direct flight route between Ben-Gurion International Airport and Sharm el-Sheikh.)

The article noted that a military coalition with Israel is favorable to Egypt and the UAE because of Iran’s malign behavior in the region, coupled with its ongoing nuclear program. Such an alliance would also counter an assessment by certain Gulf states that the United States is working against their interests in the effort to revive the 2015 nuclear deal between Iran and world powers.

The article stated, according to MEMRI: “Egyptian sources told Al-Arab that energy and food security are a ‘practical starting point for cooperation between the three countries, and for taking a step that Egypt was apparently reluctant to take [until now]—namely, taking its relations with Israel from the bilateral level to the regional one.’ ”