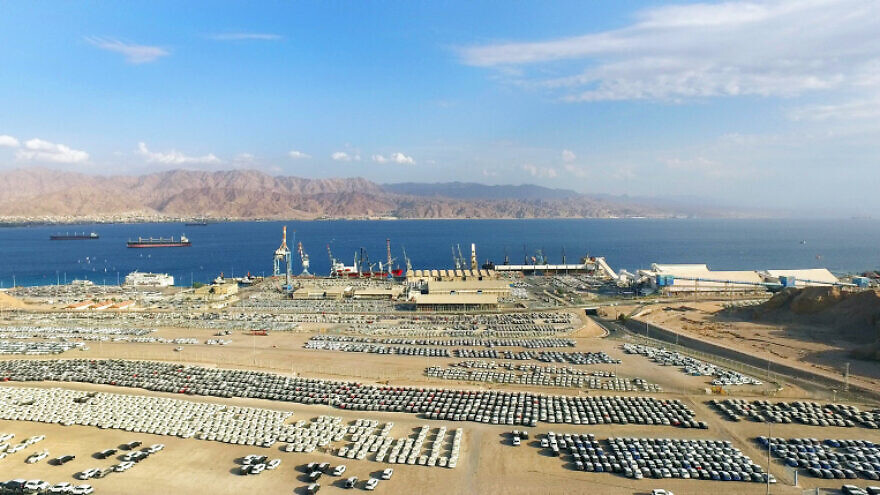 (November 8, 2021 / JNS) A deal between the United Arab Emirates and Israel, signed on Oct. 19, 2020, to transport Emirati crude through existing Israeli pipelines between the port of Eilat on the Red Sea to Ashkelon on the Mediterranean—initially hailed as the first major agreement following the Abraham Accords—is now in jeopardy, with the UAE reportedly sending out feelers for an alternative route.

The deal is between MED-RED Land Bridge Ltd., a private Dubai-based company, and Israel’s state-owned Europe Asia Pipeline Co. (EAPC). According to the EAPC, the deal benefited the UAE by letting it deliver its oil more efficiently to Western markets and benefited Israel in ensuring its energy security.

On Oct. 21, almost a year to the day after the signing, a Globes article described how the UAE was considering finding a path through Egypt instead as the Israeli government becomes mired in internal disagreement over the deal’s pros and cons, casting doubt that it will allow the agreement to stand.

Israeli environmentalist groups have sued the government. Their main argument is that the pipeline deal would lead to a sharp rise in the number of oil tankers visiting the Gulf of Eilat, creating a serious threat to Israel’s coral reefs in the event of a spill.

Ironically, the new potential route would run from the Egyptian resort of Taba on the Red Sea, only a short distance from Israel’s pipeline installation, leaving Israel’s coral reefs just as exposed to a potential oil spill, only without any upside for Israel.

The EAPC voiced its frustration in a statement it shared with JNS: “Establishing an alternative in Taba, in Egyptian territory, about 100 meters from the EAPC, demonstrates the magnitude of the absurdity. Israel’s citizens and the State of Israel will not enjoy the enormous economic, geopolitical and security benefits of the agreement and will not be able to monitor the Egyptian facility in the Gulf of Eilat.”

(The EAPC similarly noted, in a July written response to the court, that more than 200 tankers a year visit the Port of Aqaba on the Jordanian side of the Gulf of Eilat, and that more than 2,150 have visited in the last decade, but green groups pay no attention to this.)

In May, Gila Gamliel of the Likud Party, the previous government’s Minister of Environmental Protection, allied herself with the opponents of the deal, saying it threatened the environment. Her successor, Tamar Zandberg of Meretz, has been still more strident in her opposition. Zandberg argued after assuming office that the deal held no benefits for Israel—“not even a liter of fuel passing through is intended for the Israeli economy, as far as I know.”

‘We cannot have a race to the bottom’

The government remains divided. “There is strong disagreement among government offices because the Ministry of Environment strongly opposes the MED-RED contract, but other ministries are not against it. Some say that they have no opinion. Some think that even though there are disadvantages regarding the contract, aborting it right now would harm Israel and its ability to make contracts with other countries” Asaf Ben Levy, legal adviser to the Society for the Preservation of Nature in Israel (SPNI), told JNS.

Ben Levy helped work on the lawsuit against the MED-RED deal and will present the case in court for SPNI. He said that the exact court date has not been set but will take place sometime in December.

Commenting on reports that the UAE is looking at Taba in Egypt, Ben Levy said there has also been discussion of a possible alternative route through Jordan. Ben Levy agrees that the damage from an oil spill to coral reefs from a point on the Gulf of Eilat belonging to either Jordan or Egypt would likely be the same as from Israel. However, he says that when it comes to protecting nature, Israel shouldn’t let what other countries do dictate its own actions.

“There is a problem saying other countries do it, and therefore, it’s OK for us to do it,” he said. “We cannot have a race to the bottom. We cannot look at other countries and say that if they don’t meet our standards, then we should lower ours as well. The opposite should be the case.”

Ben Levy also argued that transporting crude oil through Israel might be more serious for Israel in terms of potential environmental damage than it would be for Jordan or Egypt, referring to Israel in totality, including the land over which the pipeline travels and its egress point on the Mediterranean.

“Of course, every country has its own valuable environmental areas, but Israel is such an important one. It’s a hotspot which is recognized by the U.N., a natural hotspot, and the damage of an oil spill in Israel might be more harmful than in Egypt or Jordan,” he said.