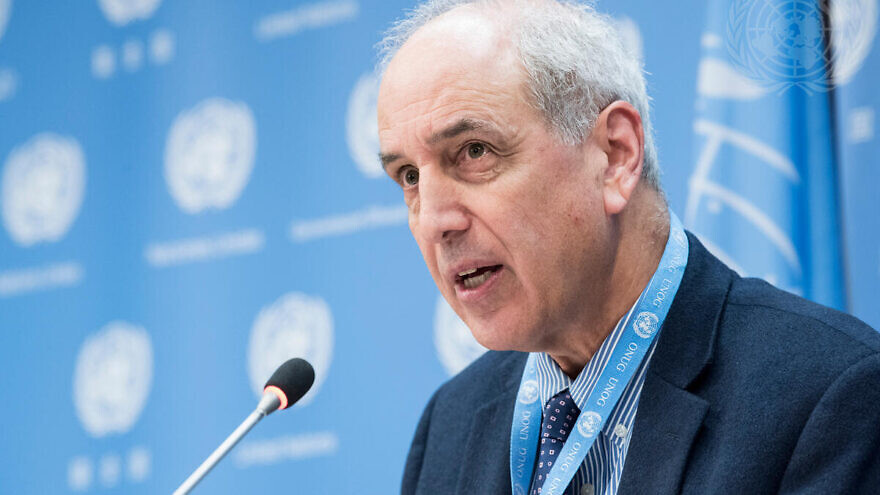 “The Special Rapporteur recommends that the international community accepts and adopts the findings … that apartheid is being practiced by Israel in the occupied Palestinian territory and beyond,” he wrote.

Lynk, whose official title is “Special Rapporteur on the situation of Human Rights in the Palestinian territories occupied since 1967” will formally release the report on Thursday ahead of a Human Rights Council debate on Agenda Item 7, a permanent debate reversed for discussing Israeli human-rights abuses against the Palestinians.

In the report, Lynk accused Israel of pursuing a strategy of “strategic fragmentation of the Palestinian territory” and said that the “political system of entrenched rule in the occupied Palestinian territory which endows one racial-national-ethnic group with substantial rights, benefits and privileges while intentionally subjecting another group to live behind walls, checkpoints and under a permanent military rule.”

The Canadian academic, who is stepping down from the position, called on the international community to implement associability measures to end Israel’s apartheid practices.

He wrote that the United Nations should “re-establish the Special Committee Against Apartheid” to investigate “allegations of apartheid against any government.”

The report comes on the heels of last month’s Amnesty International report that also accused Israel of apartheid.

“The Special Rapporteur’s findings are an important and timely addition to the growing international consensus that Israeli authorities are committing apartheid against the Palestinian people,” said Saleh Higazi, deputy director for the Middle East and North Africa at Amnesty International. “The report details how Israel has established a system of racially motivated oppression against Palestinians, explicitly designed to maintain Jewish Israeli domination, and maintained through the commission of grave human-rights violations.”

Israel’s Mission to the United Nations in Geneva blasted the report, saying Lynk is “well known for his blatant and disturbing anti-Israel views. This report is no different.”

“The Special Rapporteur Michael Lynk has been distorting the facts with regards to the Israeli-Palestinian conflict for the past six years at the United Nations and is doing so again in his final report.”

“This report recycles baseless and outrageous libels previously published by NGOs that share the same goal as the author of this report: to delegitimize and criminalize the State of Israel for what it is: the nation-state of the Jewish people, with equal rights for all its citizens, irrespective of religion, race or sex,” said Israeli Ambassador Meirav Eilon Shahar.

Shahar said “no report on the Israeli-Palestinian conflict can be taken seriously if the security challenges and threats faced daily by all Israelis, including the 20% non-Jewish minority, is not considered.”

She went on to note how the report does not mention or even condemn the Palestinian terrorist group Hamas in the Gaza Strip, or the Palestinian Authority and its legal obligations to its own people.

“Once again, the Human Rights Council and its mechanisms have found a way to further inflame the region and the conflict,” she said. “Once again, they have proven to be detrimental to the cause of peace and reconciliation.”