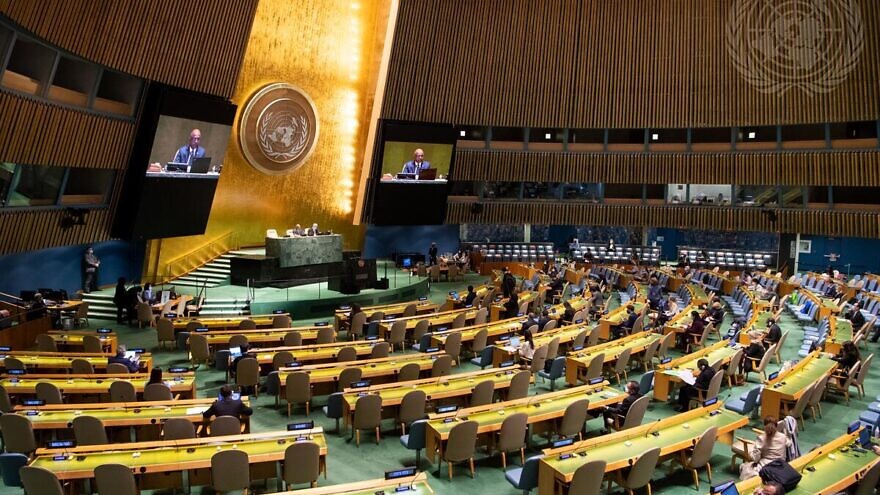 (December 29, 2021 / JNS) When the Biden administration announced its decision to reengage with the Geneva-based United Nations Human Rights Council, officials said it was doing so in part to leverage its power to clamp down on the body’s fervent anti-Israel focus.

Yet less than a year later, Israel faces an unprecedented, open-ended U.N. Commission of Inquiry created by the UNHRC, which includes notorious human rights violators such as Cuba, China, Russia, Mauritania and Eritrea. This past week, the U.N. General Assembly voted to give the commission a budget of $5 million a year, allowing it to hire some 24 full-time staff members. The Jerusalem Center for Public Affairs notes that there is only 20 permanent staff for the UNHRC branch covering all of Asia.

The basis of the inquiry is the Israel-Hamas flare-up of violence in May, in which Israel defended itself from a terrorist-initiated onslaught of some 4,000 rockets launched from Gaza over an 11-day period. The inquiry, however, calls for submissions of evidence of any crimes ever allegedly committed by Israeli officials at any point in the past, back to the “root causes” of the conflict, or even in the future, as the inquiry’s mandate knows no end—a provision unique to this particular commission. For perspective, this is the 33rd commission of inquiry, fact-finding mission or other investigative body created by the UNHRC, and the ninth to target Israel.

The mandate for this commission also includes recommendations for criminal responsibility.

“The mandate essentially is to produce evidence admissible in court, and they’re hiring a team of lawyers to produce legally admissible findings. The Hague could copy and paste the findings and other courts can do the same,” said Hillel Neuer, executive director of the UN Watch NGO and an expert on the world body’s anti-Israel bias, who anticipates that the commission’s biannual reports will assail Israel.

“What makes this different from all of the regular U.N. reports produced from the UN’s offices in Jerusalem, by the secretary-general and other U.N. organs, is that this inquiry comes with the appearance of an independent commission, as opposed to bureaucrats. It has the appearance of being run by judges, like a court case. That’s the effect, and that’s why it can be so troubling for Israel in the eyes of the global public,” Neuer told JNS.

As to those judges, the UNHRC’s president appoints three members to lead the commission. The commission is currently led by South Africa’s Navi Pillay, who served as the U.N. high commissioner for human rights and has displayed a consistent, well-documented animus toward Israel. Her accusations of illegal Israeli conduct during the Gaza flotilla raid of 2010 were later refuted by a U.N. commission headed by Sir Geoffrey Palmer.

“Pillay’s appointment to lead the commission—someone who displays perpetual disdain and comprehensive condemnation of Israel—shows that this whole thing is a done deal. She has an appalling record on Israel,” said Neuer, adding that the commission’s mandate doesn’t just address alleged war crimes, but could include accusations of apartheid and of racism by Israel in the disputed territories in Judea and Samaria.

Another member appointed to the new commission, Miloon Kothari, was the U.N. special rapporteur on housing when he was accused by Israel in 2002 of visiting under the pretense of attending a private event, as documented on his visa application. Instead, Israeli officials discovered during the trip that Kothari was collecting information that was later used in a U.N. report critical of Israeli housing policies in Judea and Samaria.

The notorious United Nations Fact-Finding Mission on the Gaza Conflict, also known as the Goldstone Report, accused both the Israel Defense Forces and Palestinian terrorists of war crimes and possible crimes against humanity in the Gaza War of 2008-09. Only two years later did the report’s namesake, South African jurist Richard Goldstone, publicly retract the report’s accusations that it was Israeli government policy to deliberately target citizens. The damage had been done, though.

Then-Israeli Prime Minister Benjamin Netanyahu spoke in early 2010 of a “Goldstone effect,” ranking it alongside Iran’s nuclear program and the rocket arsenals of Palestinian and Hezbollah terrorists among the three main threats facing Israel, due to the headlines it generated and its use in public discourse.

A spokesperson for the Israeli Mission to the United Nations in Geneva confirmed to JNS that Israel will not cooperate or collaborate with the new commission.

According to the spokesperson, the commission’s first report will be submitted to UNHRC in June, before a summary is turned over to the U.N. General Assembly next December. While neither the UNHRC nor the General Assembly can produce a binding resolution with the force of law, the General Assembly could make recommendations that would require another body, such as the U.N. Security Council or, more critically, the International Criminal Court, to act.

But, unlike other U.N. Commissions of Inquiry, this one won’t end after six or nine months or even a year. It is set to carry on in perpetuity.

“The Inquisition lasted hundreds of years. This inquiry might as well,” said Neuer.