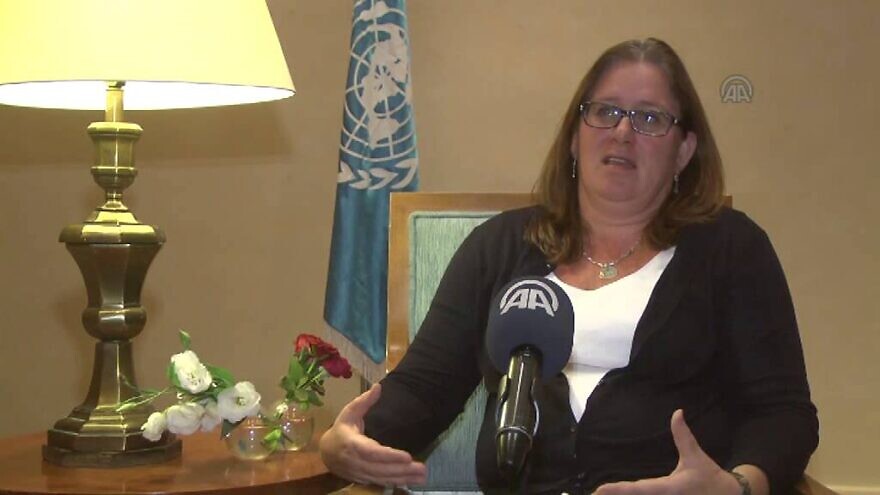 Sarah Muscroft, then head of the Regional Office for East Africa at United Nations OCHA (Office for the Coordination of Humanitarian Affairs), during an interview in Amman, Jordan in 2015. Source: Screenshot.
Spread the word.
Help JNS grow!
Share now:

(August 14, 2022 / Israel Hayom) A United Nations official has been forced to step down as head of the U.N. Office for the Coordination of Humanitarian Affairs in the Palestinian Authority after criticizing the Palestinian Islamic Jihad’s rocket attacks on Israel during “Operation Breaking Dawn.”

On Aug. 8, Sarah Muscroft tweeted that she was “relieved” to see a cease-fire that would end hostilities “impacting both Palestinians and Israeli civilians” and condemned “indiscriminate rocket fire of [Palestinian] Islamic Jihad” that “provoked Israeli retaliation.”

Muscroft’s tweet said that civilians’ safety was “paramount” and that the cease-fire must be upheld.

The tweet drew fire from pro-Palestinian activists who accused her of blaming the hostilities, which were launched by Israel to preempt a major PIJ terrorist attack in response to one of its operatives being arrested, on the Palestinians.

Muscroft responded to the criticism by deleting her tweet, which she said had been “ill-informed,” and then went on to delete her entire Twitter account. Muscroft also apologized for her “poor judgment.”

On Saturday, an OCHA spokesperson said that Muscroft had been assigned to an unspecified new role.

A diplomatic official who spoke to Israel Hayom said that the uproar of Muscroft’s condemnation of terrorist rocket attacks on Israeli civilians “was a case that illustrated the U.N.’s hypocrisy about Israel.”