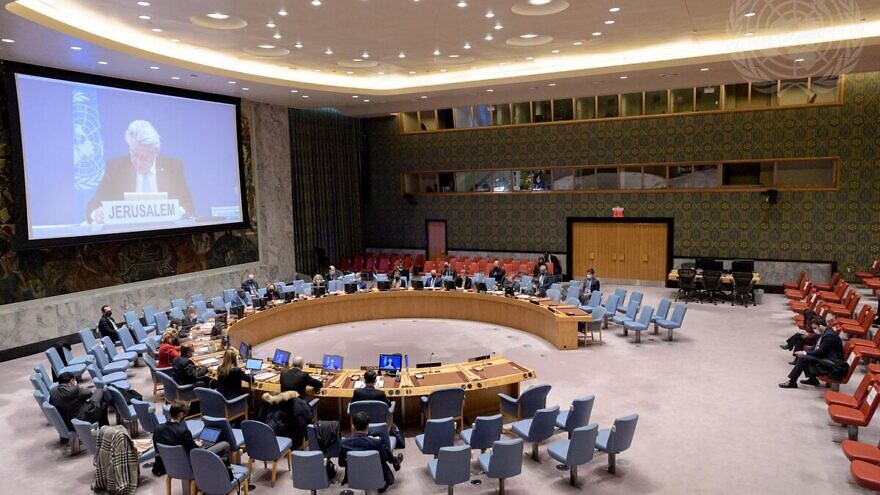 (June 28, 2022 / JNS) Monday’s closed consultations at the U.N. Security Council meant that the usual fireworks surrounding the monthly meeting on the Israeli-Palestinian conflict were quieted. Both Israeli and Palestinian Authority representatives were absent from the meeting.

The United States gave a largely balanced statement, with Deputy Ambassador to the United Nations Richard Mills opening by noting the Biden administration’s “outrage over the string of terrorist attacks against Israelis this year.”

He added that the U.S. condemns “the rocket attacks launched from the Gaza Strip again this month, which … broke a two-month pause in rocket fire from Gaza. Many Israelis, especially those who reside close to the border with Gaza, live in perpetual fear that they or their families could come under attack at any time. This must stop.”

Russia, which has become increasingly critical of Israel at the United Nations since Russia’s invasion of Ukraine, blamed Israel for an increase in violence in Jerusalem and Judea and Samaria “as a result of a crackdown on Christian and Muslim worshippers and restriction of their access to the holy sites.”

“It may seem that Israel received a carte blanche to engage in illegitimate unilateral action upon silent approval of Washington that basically blocked all opportunities to have the peace process recovered,” he said. “In return, our colleagues in the council try to impose ‘economic truce’ on Palestinians without meeting their legitimate aspirations and letting them have a sovereign state.”

Israel and Russia have cooperated to a certain degree on Israeli operations in Syrian skies, with the Russians remaining largely silent so long as they are given forewarning of impending activity, in order to reduce the risks to its own troops in the area. However, Russia has increasingly threatened to reduce Israel’s freedom of action as a result of Israeli criticisms of Russia’s invasion of Ukraine.

While most Security Council members continued to call for a fair, full and transparent investigation into the May death of Palestinian-American journalist Shireen Abu Akleh during a raid by Israeli troops in pursuit of terror suspects in Jenin, Russia cited on Monday a recent U.N. Human Rights Office investigation that laid the blame for Akleh’s on Israelis firing “seemingly well-aimed bullets,” according to a statement from that office.

Israel has vehemently denied that Abu Akleh’s death was intentional, and continues to investigate whether the fatal bullet, which the Palestinian Authority has refused to hand over for analysis, came from Israeli troops.

Much of the remainder of the discussion revolved around criticisms of additional homes for Jews being built in areas under full Israeli control, and an assessment of the supposed financial peril facing the U.N. Relief and Works Agency (UNRWA), which deals with Palestinian refugees and announced last week another annual shortfall of $100 million, despite a pledging conference that drew $160 million from international donors.

None of the Security Council members addressed the issue that the consistent shortfall is possibly due to the fact that the Palestinian “refugee” population continues to grow, rather than decline, due to the Palestinians’ unique status, under which their descendants are considered refugees in perpetuity, no matter where they live or what citizenship they hold.

Separately on Monday, the Security Council unanimously renewed the mandate of the U.N. Disengagement Observer Force (UNDOF)—the peacekeeping mission operating on the Golan Heights that is tasked with maintaining the ceasefire reached between Israel and Syria in the aftermath of the 1973 Yom Kippur War—for six months. The renewal was essentially technical in nature, with little to no disagreement among the council members regarding the terms.

The United States and Russia, despite differing opinions on who holds sovereignty over the Golan Heights, see the continuation of UNDOF as a separate issue on which they agree.