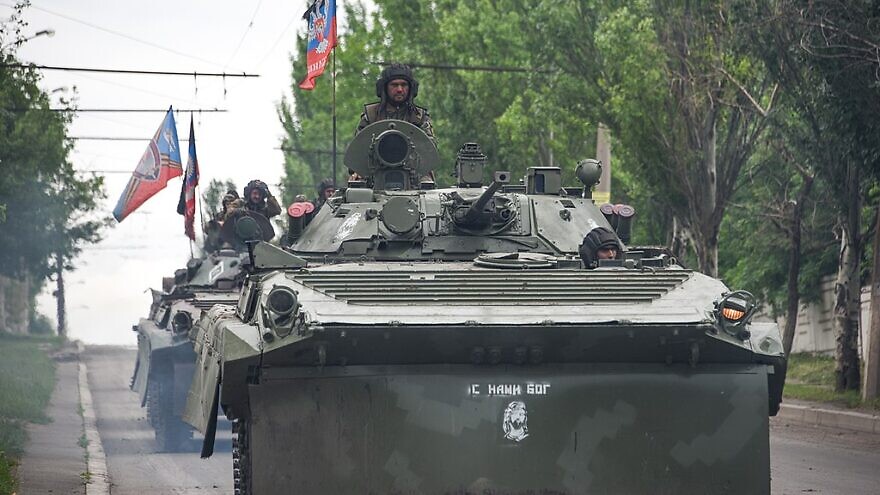 (February 22, 2022 / JNS) A column of unmarked military vehicles was seen on the outskirts of Donetsk, Ukraine on Tuesday morning, just hours after Russian President Vladimir Putin ordered the deployment of troops in the eastern part of the country, according to multiple media reports.

On Monday, Putin formally recognized the Donetsk and Luhansk People’s Republics (DNR and LNR) as independent, and sent Russian troops in to “keep the peace,” reported Reuters.

“I deem it necessary to make a decision that should have been made a long time ago—to immediately recognize the independence and sovereignty of the Donetsk People’s Republic and the Luhansk People’s Republic,” the Russian president said in a televised address. He also said that the Russian people would support his efforts to take back lands that belonged to Russia from as far back as the Ottoman Empire.

In another post, which was shared by several others, including the press, she showed images of military equipment arriving in the breakaway regions.

A Reuters witness reported seeing “tanks and other military hardware” moving through Donetsk, and images of the unmarked vehicles, which included tanks and armored personnel carriers, circulated on social media.

British Prime Minister Boris Johnson warned on Tuesday morning that Russia’s goal was “the overrunning, the subjugation of an independent, sovereign European country,” according to Sky News.

“He’s sent troops in, he’s broken international law, he’s repudiated the Minsk agreements and torn up the understanding from Budapest in 1994 that Ukraine’s territorial integrity would be respected,” said Johnson. “He’s completely torn up international law, and we will immediately institute a package of economic sanctions, which I think his people would expect.”

These sanctions, said the prime minister, would be aimed not just at the DNR and LPR, but Russia itself, “targeting Russian economic interests as hard as we can.”

On Monday, U.S. President Joe Biden signed an executive order authorizing sanctions against the DNR and LNR, according to a statement from the White House. The statement emphasized that these measures were distinct from “swift and severe economic measures we are prepared to issue with Allies and partners in response to a further Russian invasion of Ukraine.”

The United States “will not hesitate to use its authorities to target those supporting efforts to undermine Ukraine’s sovereignty and territorial integrity,” the statement continued.