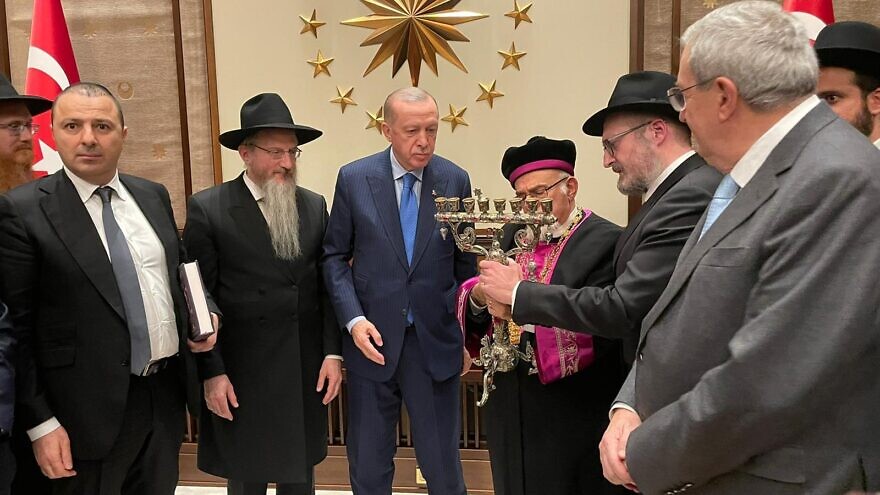 (December 28, 2021 / JNS) When the Alliance of Rabbis in Islamic States (ARIS) gathered its members for the first time under one roof in a multiday conference last week in Istanbul, the event became more than a garden-variety gathering when, to the rabbis’ surprise, they found themselves invited to dinner at the presidential palace in Ankara by Turkish President Recep Tayyip Erdoğan.

From the rabbis’ perspective, the meeting was an unvarnished success, as one of the alliance’s main goals is to instill the idea that Jews living in Islamic countries isn’t unusual.

“The discussion at the conference was how do we do it, how do we get across that Jews in Muslim countries is a normal thing, and it turned out at the conference that we actually did it,” said Mendy Chitrik, chief rabbi of the Ashkenazic community of Istanbul, and chairman of ARIS, noting that it’s hard to top images of the Turkish president meeting with a group of rabbis to convey that message.

“The pictures themselves are the message — a message of tolerance,” he told JNS.

The alliance, with a stated mission to “support, sustain and advocate on behalf of Jewish life across Islamic States,” boasts a membership that includes 45 rabbis, the majority of them associated with Chabad-Lubavitch (though the organization is independent of that movement). The alliance serves a total of 100,000 Jews in 14 Muslim-majority countries.

Chitrik described the meeting with Erdoğan as an “extremely pleasant occasion,” starting as a formal affair and becoming “very friendly” with the rabbis gathering around the president to take selfies by the end. The 38 rabbis were provided with a Glatt kosher, four-course meal and even prayed the Jewish evening service at the palace, something Chitrik said may have been unprecedented.

Erdoğan made several substantive statements at the meeting. According to Turkey’s Hurriyet Daily News, Erdoğan said of Israel, “We are ready to develop our cooperation and to better utilize our high potential. I attach importance to maintaining contact and dialogue.” He called anti-Semitism “a crime against humanity,” noted that Holocaust denial in Turkey was illegal and declared his intention to fight anti-Semitism as much as he fights Islamophobia.

Yet Aykan Erdemir, senior director of the Turkey Program at the Foundation for Defense of Democracies and a former member of the Turkish parliament, took a jaundiced view of the meeting, saying it followed a pattern of “spectacles of tolerance” in which Erdoğan “uses religious minorities as props to whitewash his government’s discriminatory policies and hateful rhetoric toward these communities.” 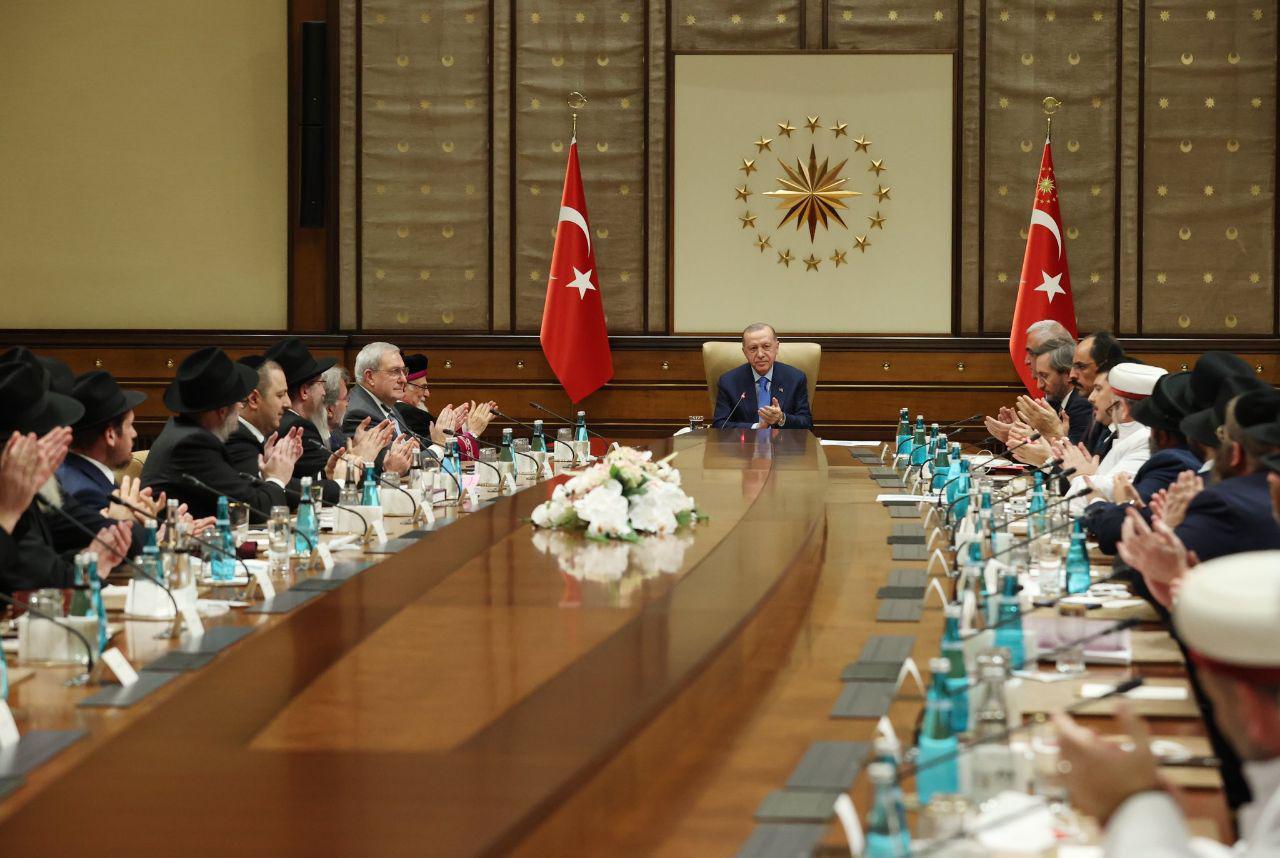 “As a result of his deeply held anti-Semitic views, Erdoğan often conflates his relations with Israel with his relations with Jewish communities at home and abroad,” he told JNS. “The Turkish president’s attitude toward Israel has shown wild mood swings over the years, similar to the way in which he has swung between expressions of hate and benevolence toward the Jewish people.”

“The Turkish president is also motivated by a desire to burnish his image, tarnished by frequent accusations of antisemitism, most recently by the U.S. State Department and the House Bipartisan Task Force for Combating Antisemitism,” he added.

Chitrik demurred when it came to Erdoğan’s political motives, saying, “Of course, when there’s a good relationship between our host countries and the State of Israel that makes us feel more comfortable. There’s no question about it, but we are rabbis and our main concern is the future and well-being, spiritual and physical, of the 100,000 Jews living in Muslim countries.”

Dr. Hay Eytan Cohen Yanarocak, researcher at both the Jerusalem Institute for Strategy and Security and the Moshe Dayan Center for Middle Eastern and African Studies, saw the meeting as a positive step forward. He told JNS that Erdoğan is a practical man and, whatever his earlier attitudes toward Israel, recognizes that his policies have left Turkey isolated, unable to forge alliances and economically weak. The meeting with the rabbis offered him a perfect opportunity to send a message that he wants to repair relations with Israel and also with the U.S.

“A meeting with a group of rabbis is one of the most functional, effective ways of showing that his government is one that upholds religious tolerance. It’s not only a message to Israel, but also to the United States that he has no problem with Jewry,” Yanarocak said.

The Israeli decision-makers should send a “reciprocal message” that it views Turkey as a “strategic asset” for Israel, but also be careful to stress the need for “genuine normalization.” Israel has been down this road before with Turkey, he noted.

“Relations were normal in 2016 and then in 2018 relations deteriorated after [former U.S. President] Donald Trump decided to recognize Jerusalem as Israel’s capital. Then Turkey expelled Israel’s ambassador,” Yanarocak noted.

Yanarocak’s advice to Israel’s leaders is to insist that friendly statements from Erdoğan should be supported with “tangible actions” from the Turkish president, the most important of which is putting distance between itself and Hamas and the Muslim Brotherhood. “When Turkey will distance itself from such entities, I believe normalization will come naturally,” he said.

One of the difficulties in reaching “genuine normalization” is that Erdoğan is convinced that he can turn relations on and off whenever he wants. In that approach, he is “mistaken,” Yanarocak said. Israel, Egypt, Saudi Arabia and others view Turkey as weaker today because of its economic troubles, its greater isolation and its knotty relations with the U.S.

“I think this is the most important mistake of the Turkish administration, namely, that whenever they want to mend the fences, the other side will be eager,” he said. “Thanks to the Abraham Accords, Israel sees itself in a lot stronger position diplomatically, and in a position that she can make demands of the Turks. The Turkish administration needs to internalize that.”

Erdemir is pessimistic that Erdoğan’s administration is capable of repairing relations with Israel. “A genuine Turkish-Israeli rapprochement will have to wait until Turkey’s 2023 presidential and parliamentary elections, when Turkey’s opposition bloc is expected to defeat Erdogan’s Islamist-ultranationalist alliance,” he said.

He added, “Until then, Jerusalem should continue to invest in the strong trade and people-to-people ties between Turkey and Israel. When Ankara returns to its traditional foreign and security policy of the pre-Erdoğan years, diplomatic, military and intelligence cooperation with Jerusalem is likely to bounce back. The cordial nature of the bilateral relations during the 1990s shows the potential of both countries to find win-win relations once Erdoğan’s ideological obstacles are removed.”