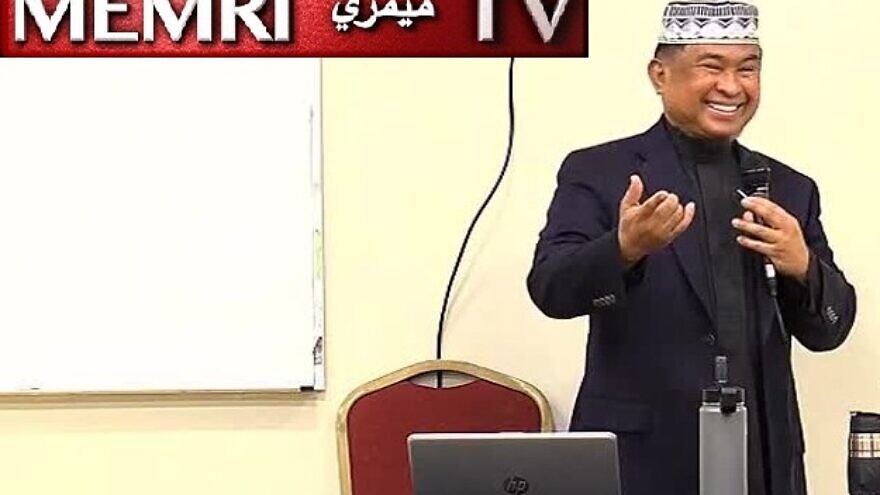 Indonesian-American Imam Mohamad Joban of Masjid Ar-Rahmah in Redmond, Washington, delivered a lecture recently focusing on the Quranic story of a town of Jews who were transformed into apes by Allah for having rebelled against Him by setting fishing nets on Friday, before the Sabbath, and collecting the fish on Sunday.

This story was never exposed, Joban told his congregants, because the Jews cover up bad stories about themselves and always pretend to be pious. Laughing, he related how the Jews who had been transformed into apes cried because they couldn’t recognize one another. In another verse, said Joban, the violators were transformed into pigs.

He discussed the question of whether the transformed Jews had offspring, saying that there are two views on the matter. He mentioned two cases, from Egypt and Malaysia, of newborns looking like apes and pigs.

Joban and his congregation then chanted from the Quran responsively: “When [the Jews] rebelled against the commands to refrain, [Allah] said to them, ‘Be despicable apes.'”

Joban is a full-time Imam at Masjid Ar-Rahmah, which belongs to the Muslim Association of Puget Sound (MAPS). The lecture was uploaded to the MAPS Redmond YouTube channel on Dec. 17, 2019.

Every year during Ramadan, MAPS Redmond hosts an Annual Interfaith Iftar event. These events have been attended by high-profile local, state and federal government officials. These officials have included, but are not limited to, FBI Assistant Special Agent in Charge Brad Deardorff, Rep. Roger Goodman (D-Wash.), officials from the offices of Rep. Dave Reichert (R-Wash.) and Rep. Adam Smith (D-Wash.), members of the Washington State Senate such as Bob Hasegawa, representatives from the office of Washington State Governor Jay Inslee, and members from the Seattle Jewish and Christian communities.

In 2003, Imam Joban led a prayer at the Washington State House of Representatives. He has previously served as the Imam of the Islamic Center of Olympia, in Olympia, Washington.

The rest of this article is available at the MEMRI website.