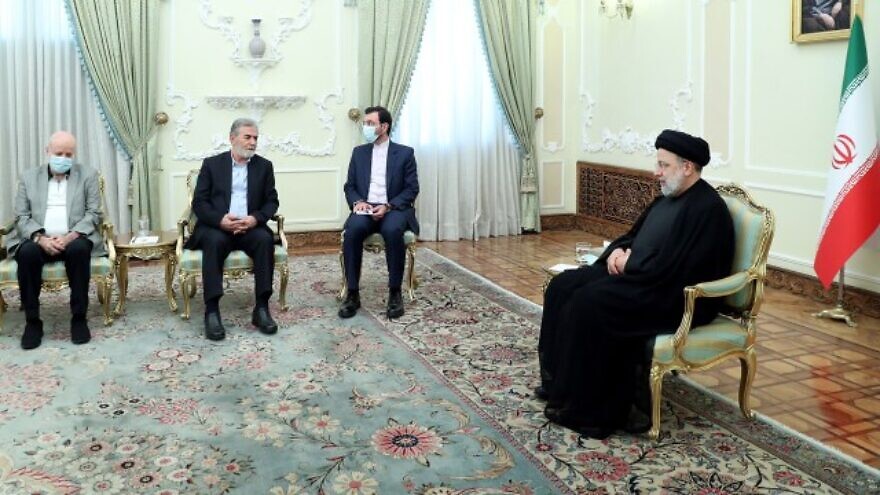 (August 11, 2022 / Jerusalem Center for Public Affairs) Even before Israel’s “Operation Breaking Dawn” in Gaza was launched on Aug. 5, Palestinian Islamic Jihad Secretary-General Ziyad al-Nakhalah was in Tehran to meet with top regime officials and military commanders.

Nakhalah traveled to Iran on Aug. 2, the day Israel arrested top PIJ official Bassem al-Sa’adi in Jenin. Nakhalah received the news of al-Sa’adi’s arrest as he was preparing for his first meeting in Tehran. His host for that meeting was Hossein Amir-Abdollahian, foreign minister in the government of President Ebrahim Raisi.

Nakhalah attended additional meetings before the IDF’s operation in Gaza began. On Aug. 3, he met with Mohammad Bagher Ghalibaf, chair of the Iranian parliament, and Ali Akbar Velayati, an adviser to Iran’s spiritual leader Ali Khamenei.

On Aug. 6, the Iranian foreign minister called Nakhalah to share his condemnation of Israel for launching the operation. Amir-Abdollahian told Nakhalah that Israel’s “savage attacks” were aimed at creating a crisis in Gaza to divert attention from Israel’s own “multilayered crises.”

Nasser Kanaani, the spokesperson of the Iranian Foreign Ministry, said at the onset of the operation, “Iran strongly condemns the Zionist apartheid regime’s barbaric offensive against Gaza, and it is the legal right of the Palestinian people and the resistance organizations to defend themselves against the Zionist regime’s aggression and acts of terror.”

Kanaani said, “In its savage onslaught,” Israel had “killed resistance commanders and helpless Palestinians, and the fledgling [Lapid] regime, which likes to create adventures and take provocative steps, is responsible for this crime and thus for the consequences of the aggression as well.”

The spokesperson added that Tehran was calling on all countries and international organizations “to fulfill their legal, moral and human responsibility and protect the oppressed Palestinian nation and denounce the Zionist regime’s acts of terror. They must also prevent the continuation of the crimes of this regime, which is the main cause of the instability and insecurity in the region.”

Gen. Esmail Qaani, commander of the IRGC Quds Force, spoke at length about the tensions between Israel and Gaza during an Ashura religious ceremony in the northern province of Mazandaran. He boasted that “at least 15 operations are carried out daily against the Israeli positions,” but did not elaborate.

He cast the conflict in religious terms, as “the children of Islam” versus Israel and the United States.

The “Palestinians have struck Israel hard, and it is collapsing, and every day we see that the Zionist regime’s confidence level is declining. Palestinian fighters are planning to strike the final blows to this rotten body,” he said. “As always, Iran will stand beside the oppressed Palestinian fighters. Children who were educated in Islam in the occupied territories, in Gaza, and in Lebanon are faithful to the teaching of the imams and the doctrine of the revolution. The United States and Israel cannot stand against these heroes,” he continued.

“The children of Islam in the occupied territories have achieved self-sufficiency and will confront Israel until the victory is complete,” said Qaani.

He also threatened Israel directly, saying, “The enemies must know that we will never ignore their deeds and crimes against the region’s oppressed people and everywhere else. Indeed, in many cases, the enemy has suffered the response in a very short time, but for each of his steps for which he still has not suffered the response he deserves, we have a plan.”

According to the Fars News Agency, also affiliated with the IRGC, Salami told his guest:

“The liberation of the Palestinian people is more than just a wish for us; it is a basic strategy. If it were just a heartfelt wish, it would not be defined as an actual objective. Ayatollah Ruhollah Khomeini [founder of the Islamic Republic] and Ayatollah Ali Khamenei, the current Supreme Leader, taught us to see it as a goal and a strategy that will lead to liberating holy Quds [Jerusalem] and to restoring the lost, occupied lands of Palestine to their original owners.

“The course of developments in occupied Palestine and the attrition of the Zionists’ power, which is heading for collapse, are irreversible as we move closer to the goal. The power of the Palestinian resistance has grown compared to the past, and now, taking into account its potential capabilities, we see that the resistance has [also] found the right way to wage large-scale wars.

“Important, zealous, senior Israeli officials such as Ehud Barak, Benjamin Netanyahu and Naftali Bennett have already acknowledged the helplessness and imminent collapse of their regime. International experts also note this and stress that Israel can no longer withstand the undeniable facts on the ground. Israel’s weakness grows as Palestine gains strength. They are weak psychologically and see a black and frightening future, so some prefer to leave. That is, reverse migration. When they collapse from within, there may be no need for a war.

“We stand by your side until the end, and Palestine and Palestinians should know that they are not alone. Israel’s latest operation has killed and wounded many, especially innocent children. Undoubtedly, the rapid response to this crime by the Islamic Palestinian resistance shows that a new stage has begun as the resistance intensifies. Israel will pay a heavy price for this crime.”

In conclusion, Salami expressed hope for “a quickening of the processes leading to the victory of Palestine.” He added, “The achievement of effective military force alters the balance of terror and constitutes a guarantee for the success of the rebellion and the Islamic resistance of Palestine. Your people also stand by you, and you will be able to gain even more strength and overcome the other side from the human, spiritual, and military standpoints.”