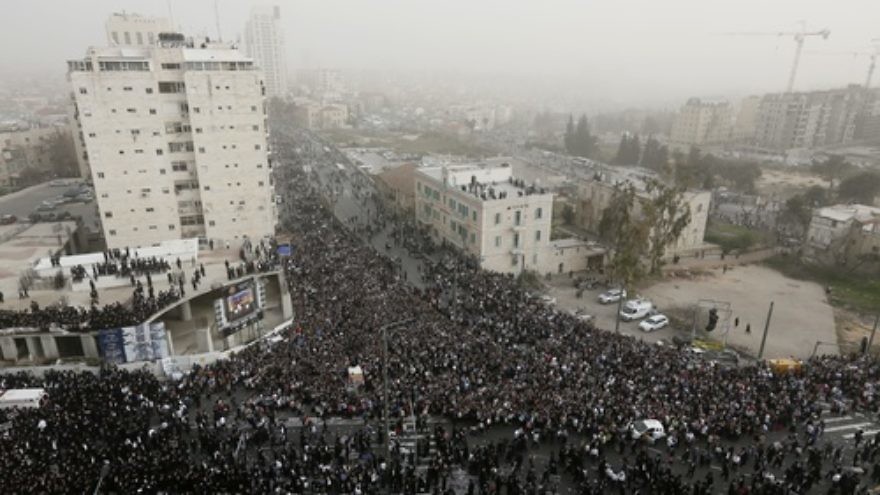 Close to half a million members of Israel’s haredi public rallied in Jerusalem on Sunday, shutting down roads in and around the city, to protest a proposed bill that would mandate them to participate in the Israel Defense Forces and would criminalize those that refuse conscription.

Some political parties—led notably by Finance Minister Yair Lapid’s Yesh Atid—have made the issue of religious enlistment a focal point of their agendas, while religious leaders, who are conspicuously absent from the current governing coalition, are digging in their heels to fight the impending change in the status quo.

“What we are witnessing is the politicization of an important social process,” Professor Yedidia Stern, vice president of research at the Israel Democracy Institute (IDI), told JNS.org.

Currently, a committee chaired by Member of Knesset Ayelet Shaked (Habayit Hayehudi) is pushing to pass a law to solve the social inequality issue, whereby secular Israelis must enter the army as part of a mandatory draft, while religious Israelis can be granted exemptions.

The issue has become a flashpoint in Israeli politics in recent years, with the country’s secular majority calling for the religious to share their burden of national service. In 2012, Israel’s Supreme Court ruled that the previously legislated Tal Law, which exempted tens of thousands of eligible religious males from national army service, was illegal.

Stern, a member of the 2012 Plesner Committee for Advancing Equality in Sharing the Burden, and author of a proposal entitled “A Framework for Ultra-Orthodox Conscription,” believes that the Shaked Committee’s proposed law does not improve on the Tal Law’s mistakes. He believes the proposed law will be both damaging to society and likely to be eventually overturned if passed.

“I also want to see haredim in the army, the question is how to achieve this common goal,” Stern said.

The religious sector has overwhelmingly boycotted the Israeli army, with few exceptions, due to in large part to the perception that the army—run and founded by secular elements of society—does not provide an appropriate and safe framework for religious participants. In addition, leaders of the religious communities prefer that their constituents spend their days studying Torah in religious institutions.

Many secular Israelis resent that seemingly eligible members of the military and the workforce choose instead to rely on government subsidies and under-the-table business, as opposed to serving their nation and then contributing to the nation’s coffers by paying income tax. And for parties that seek to change such patterns, which may ultimately prove unsustainable for religious families as well as the government, the issue of changing conscription laws represents a first step.

“Everyone understands that the issue of haredim serving in the army is coming at a time when the army is scaling down on manpower, and making significant budgetary cuts,” said Moshe Weiss, a leader of the religious community and former official in Israel’s Ministry of Absorption, who has often been at the forefront of initiatives to integrate religious and contemporary social issues.

“This has less to do with equal burden of service—for which haredim are currently not needed—and everything to do with politics. This issue is being driven by populism,” Weiss told JNS.org.

According to Weiss, there are already a rapidly growing number of religious Israelis who want to serve in the army, from more modern national-religious Israelis who believe strongly in protecting the land with a strong military, to the more stringent yeshiva-based communities—commonly known in Israel as haredim.

“There is a growing trend—all-time highs—of haredi young men that are willing to serve in the army, in units that are geared for their needs, and which don’t make them adapt to a secular lifestyle,” Weiss said.

Weiss believes that in addition to those who have publicly expressed interest in serving in the military, there are thousands of haredim of all ages are willing to perform various forms of national service for the state of Israel.

“We are not just not just talking about service for one or two years, but there are religious Jews that are willing to serve the State of Israel for 20 years, as firefighters, as policemen, in hospitals—in a framework that enables them to protect their unique religious lifestyle,” he said.

“If the politicians—like Lapid and others—will work on further developing this framework, instead of using the issue of haredim serving in the army as a divisive and political wedge issue, we could take advantage of the growing trends of haredim that wish to serve, and do some true good for the country,” Weiss added.

In addition to the social rifts the proposed bill may cause, it appears as if significant components of the measure may ultimately lead to its legislative failure.

“The current draft bill is not going in a rational way toward achieve its goals,” the IDI’s Stern said. “Parts of this deal are totally irrational.”

The first part, in Stern’s estimation, has to do with the time lapse before the bill begins to be fully implemented. Under the current bill, sanctions for failing to enlist would not be enforced until 2017.

“If you want to create a revolution whereby you wish to encourage haredim to participate in their national service, then you cannot exempt them for three and a half years. The process needs to start tomorrow,” Stern said.

“If this proposed bill will in fact be passed, it will disincentivize those that wish to go to the army, because of the provision in the law whereby service is exempt for three years,” he added.

According to Stern, the three-year exemption period represents a lifetime in Israeli political cycles. As such, it is probable that a new coalition will be in place by the time the exemptions are set to end. In such a scenario, a new governing coalition may well seek to legislate a different law.

“The likelihood that there will be haredi parties in the next coalition is quite high,” Stern said.

Stern also noted that any plan to place to large numbers in prison could produce a significant burden on Israel’s prison system.

“You cannot just put a large sector of society in jail simply because they wish instead to study Torah. You cannot put sanctions against so many people. This will create a tremendous rift in society,” Stern said.

“The new law is probably unconstitutional, and it will create significant political damage,” he said.