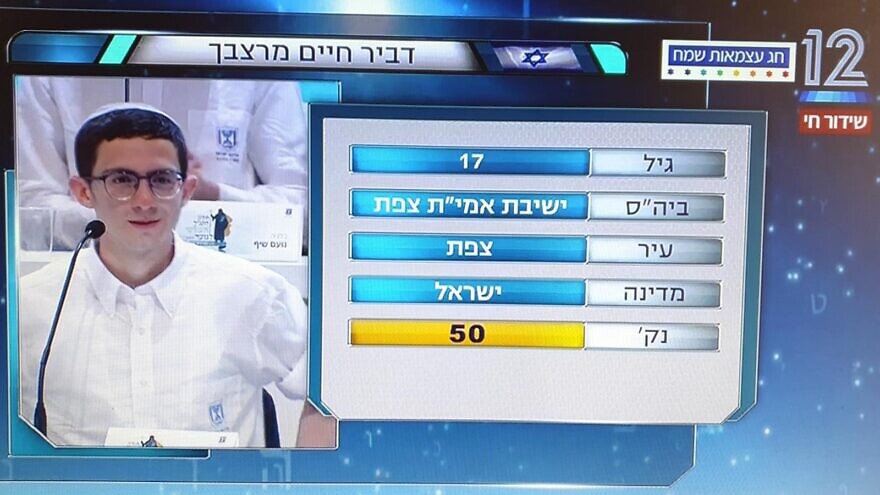 Dvir Chaim Martzbach, a 12th-grade student from AMIT Florin Taman High School for Boys in Tzfat, was the winner of Israel’s International Chidon Ha’Tanach competition. AMIT is Israel’s premier network of schools, educating 44,000 children each year across 110 schools in 31 cities.

The contest was a huge personal achievement for Martzbach, who had competed several times over the last few years. Known by all his teachers and peers as being a diligent and hardworking student who loves Torah, he received warm congratulations from his school. This was the first win for AMIT since Elhanan Bloch, a student from Yeshivat AMIT in Levav Shalem in Yeruham, won in 2012 and Moran Gomri, a student at Ulpanat AMIT in Beer Sheva, won in 2003.

“We are so proud of Dvir. His perseverance and personal investment in his educational achievements, which is characteristic of his Yeshiva more broadly, is truly impressive and really serves as an example of what every student can achieve with the right educational tools and support that we provide across our AMIT schools. We are thrilled to have him represent us and the city of Tzfat so well at this competition,” said AMIT’s Director-General Amnon Eldar.

AMIT Florin Taman High School is in the city of Tzfat, and is a school that welcomes every student who wishes to study in yeshiva, without exception. In recent years, the student body has grown from 170 to about 600 students while bagrut pass rates have also increased from 56% to 90%. The school is founded on the principles of excellence in education, Torah, Science, and the values ​​of kindness and charity. This year, the yeshiva students collected food packages for 300 local families in need for their Passover giving project.

Martzbach shared the top slot with a student from a high school in Jerusalem.

Chidon Ha’Tanach is the academically rigorous Torah-scholarship contest for middle and high school students. While various competitions take place all over the globe for the months leading up to Passover, the final runoff occurs annually in Jerusalem on Yom Ha’atzmaut, Israel’s Day of Independence. This year, following a two-year hiatus in which the finals were held virtually due to the pandemic, the contest once again returned to the Jewish Agency headquarters in Jerusalem. Martzbach, along with his co-champion, succeeded in rising to first place across all categories against 44 other finalists from over 20 countries.

“Dvir’s victory in today’s competition is a testament to AMIT’s unwavering educational commitment and support for every child, regardless of background,” said AMIT President Audrey Axelrod Trachtman. “All of the schools within AMIT’s expanding network are devoted to academic excellence grounded in a framework of Torah, Zionism, and inclusivity. Dvir’s victory shows the outcomes that can be possible for any child when the right supports are in place, and we could not be prouder of him.”

Republish this article
About The Publishers
AMIT
Founded in 1925, AMIT is the premier network of schools in Israel, educating 44,000 children each year in its 110 schools in 31 cities throughout Israel. AMIT enables students to realize their individual potential and strengthens Israeli society by educating and nurturing children from diverse backgrounds within a framework of innovation, academic excellence, and Jewish-based values. For more information, please visit www.amitchildren.org.
Publish your organization's press release on JNS Wire
Releases published on the JNS Wire are communicated and paid for by third parties. Jewish News Syndicate, and any of its distribution partners, take zero responsibility for the accuracy of any content published in any press release. All the statements, opinions, figures in text or multimedia including photos or videos included in each release are presented solely by the sponsoring organization, and in no way reflect the views or recommendation of Jewish News Syndicate or any of its partners. If you believe any of the content in a release published on JNS Wire is offensive or abusive, please report a release.
Never miss a thing
Get the best stories faster with JNS breaking news updates