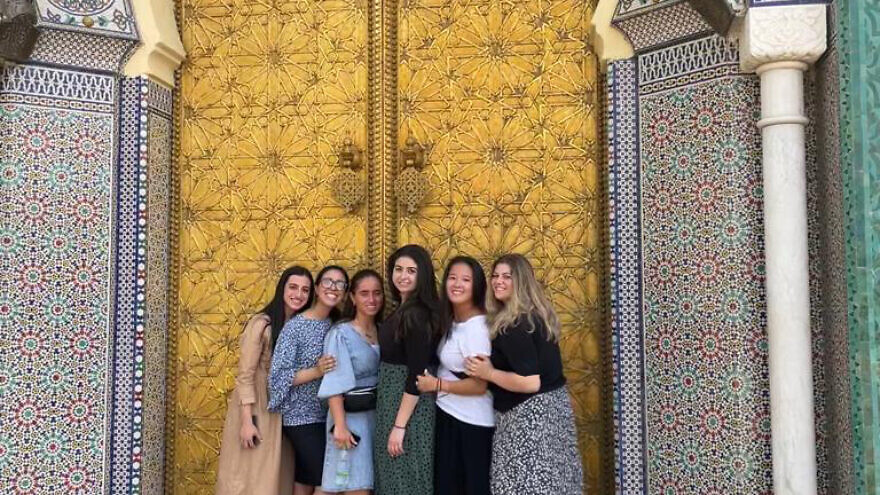 (September 1, 2022, JNS Wire) Students participating in the Touro Summer Program enjoyed an unforgettable experience exploring the past and present during an eight-day adventure through majestic Morocco

This month, I had the privilege of joining 35 Touro students from across all our campuses for a fascinating journey through Morocco. We explored ancient and modern Jewish history and learned about mass Aliyah as well as Morocco’s stance during the Holocaust.

Education and adventure went hand-in-hand on this exciting Touro summer trip led by Professor Simcha Fishbane. Students earned three college credits while visiting nine cities and numerous villages. We experienced varied cultures in each locale, from a tour of Rabat to a panoramic tour of Casablanca and the historic sights of Fez, including the home of the Rambam and numerous kevarim and shuls. I was joined by my esteemed colleagues, Touro President Dr. Alan Kadish and faculty and lecturers Dr. Israel Singer, Michael Newman and Dr. Stanley and Professor Esther Boylan. In addition to lectures and tours, the group bonded over camel, ATV and boat rides, and BBQs in the desert.

Upon arrival in Rabat, we were welcomed by Andre Azoulay, a leader of the Jewish community and senior financial advisor to King Mohammed VI. Azoulay briefed us on the status of the local Jewish community, which now consists of 1,800 Jews whose average age is 70, and approximately 40 school-age children who are mainly offspring of the Rabbis who live in Morocco. We later learned that Morocco is the only financially viable country in North Africa, largely because of this Jewish finance minister.

The current Jewish community members living in Morocco, such as Rabbi Sebbag and Rabbi Banon, inspired us with their religiosity, spirit, and optimism, and their beautiful prayer service. They do not take lightly their role as gatekeepers to the 2000-year-old Jewish traditional life in Morocco, formerly home to over 350,000 Jews, including some of the most revered rabbis and tzaddikim.

While much of the Moroccan Jewish community relocated to Israel after the 1967 war, our excursion took us back in time to the first Jewish settlements over 2,000 years ago. Interestingly, Jews came to Morocco even before the Moslems, whose origins date much later, in the seventh and eighth centuries. We felt as though we were walking in the footsteps of our holy ancestors. Faculty and students, young and old, were deeply impacted upon viewing the abandoned shuls, cities and schools that once brimmed over with Jews at prayer or going about their daily routine.

As we traveled from one city to the next over long rural stretches of dry, stony dusty regions occasionally peppered with withered bushes, I shared Morocco’s Holocaust history. When faced with having to turn over Jews by order of the French Vichy government, the 30-year-old Moroccan sultan, Mohammed V, refused, stating, “There are no Jews in Morocco, there are just Moroccan citizens.” The sultan had to comply with some of the anti-Jewish laws, but Jews were not forced to wear a yellow star nor were they eliminated from professions or forced to give up their property. Not a single Jew was deported. In short, like King Christian X of Denmark, Mohammed V protected the Jews of his country.

Throughout the tour, our Moroccan guide and author of “Jews under Moroccan Skies,” Raphael Elmaleh was able to make Moroccan history come alive. Students asked about the lasting legacy of Maimonides as well as the contributions of everyday Jewish laborers, merchants, artisans, and craftsmen to Moroccan society and about the mass emigration of Moroccan Jewry. Answers were not given from textbooks, but rather by visiting, seeing and experiencing.

Dr. Singer shared his analysis of the diversity of Morocco’s political and religious make-up throughout the ages. He explained that as a constitutional monarch, King Mohammed VI extends a strong arm in the governance and policymaking of Morocco. Because he has dedicated resources to improve the lot of the poor and promote women’s rights, he appears to be well loved by the masses. King Mohammed VI also established funds for the restoration of Jewish sites and has mandated Holocaust education. Like his grandfather Mohammed V, Mohammed VI is popular with the small Jewish population who view themselves as protected by his royal authority. Dr. Singer explained that his favorable attitude toward Jews is based on a multitude of factors including economics, especially industry and tourism, given the thousands of Jews who sojourn to Morocco each year.

“King Mohammed VI regards Jews as cultured and educated and looks upon Israel as a successful country with thousands of startups and a booming tech sector. He sees Jews as critical to the relationships he wants to forge and maintain with Israel,” said Singer.

An Experience of a Lifetime

Esther Boylan, professor of Jewish Studies at Touro summed up the trip as “one of contrasts, striking differences and close associations. From the impoverished Amazigh villages to the opulent edifices in the imperial cities, from the stench of the tannery to the scent of the spices and gardens… from the minarets to the winding allies of medinas, from the majestic mountains to the dry desert, from the holy places to hotels and palaces, Morocco taught us how the ancient and modern coalesce.”

Tamar Levine, a graduating senior who’s majoring in psychology at Touro’s Lander College for Women echoed Professor Boylan’s remarks, “It was fascinating to experience a unique culture and society that I would not otherwise have had the opportunity to explore. It was uplifting to learn about the history of the Moroccan Jewish community. It was also a great opportunity to spend quality time with other Touro students and faculty. This trip was truly an experience of a lifetime.”

Republish this article
About The Publishers
Touro University
Publish your organization's press release on JNS Wire
Releases published on the JNS Wire are communicated and paid for by third parties. Jewish News Syndicate, and any of its distribution partners, take zero responsibility for the accuracy of any content published in any press release. All the statements, opinions, figures in text or multimedia including photos or videos included in each release are presented solely by the sponsoring organization, and in no way reflect the views or recommendation of Jewish News Syndicate or any of its partners. If you believe any of the content in a release published on JNS Wire is offensive or abusive, please report a release.
Never miss a thing
Get the best stories faster with JNS breaking news updates