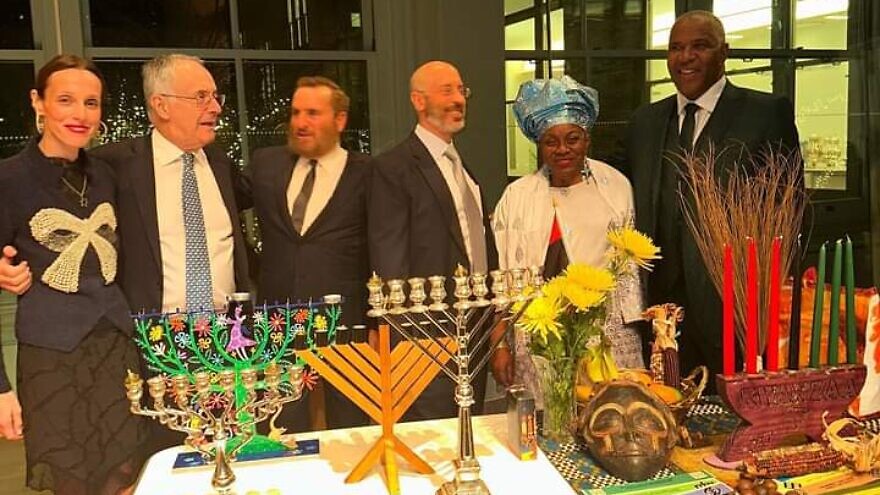 To take an active stand against the increasing instances of racism and antisemitism in our country, Mayor Eric Adams, Rev. Al Sharpton, Founder, Chairman and CEO of Vista Equity Partners and the Chairman of Carnegie Hall Robert F. Smith, Founder and CEO of the World Values Network Rabbi Shmuley Boteach, and Elisha Wiesel came together to host 15 Days of Light—celebrating Hanukkah and Kwanzaa in a unifying holiday ceremony on Sunday, December 18 at Carnegie Hall, in New York City.

In his speech at last night’s event, Mayor Adams emphasized that hate crimes should always be punishable.  In a statement, the Mayor shared that “social media is having a major impact on the hatred that we are seeing in our city and in this country. It is time for us to be more responsible about the hate that is being spread online. We should bring social media companies to the table to highlight the racist and antisemitic words being spread on their platforms.” He added that “the greatest challenge we have in front of us is that we have become silent. And when you come together like this and say we refuse to be silent, we have an open display of how much we need each other and how much we can build a unified community. If we stand up here in New York, it will cascade throughout the entire country.”

At the event, Rev. Sharpton stated, “There is never a time more needed than now for Blacks and Jews to remember the struggle that we’ve gone through. You can’t fight for anybody if you don’t fight for everybody. I cannot fight for Black rights if I don’t fight for Jewish rights and other rights, because then it becomes a matter self-aggrandizement rather than fighting for humanity. It’s easy for Blacks to stand up for racism. It’s easy for Jews to stand up the antisemitism. But if you want to really be a leader, you got to speak as a Black against antisemitism and antisemites, and you got to speak as a Jew against racism,” he added.

“Last night was electrifying, said Rabbi Shmuley Boteach. “Top African American leaders like New York City Mayor Eric Adams, Robert Smith, America’s foremost Black philanthropist, and the Rev. Al Sharpton, each lit a Menorah to celebrate Chanukah and stand with the Jewish community amid a national explosion of antisemitism. And highly committed Jewish leaders – among them Marion and Elisha Wiesel and many Rabbis and activists – joined to fight racism and stand with our Black brothers and sisters against hate. This is the way it should be. Blacks and Jews united to promote human dignity and fight the haters,” he added.

“The Black and Jewish communities have always been connected in parallel struggles, fighting to be accepted for our cultures and beliefs,” said Robert F. Smith, Founder, Chairman, and CEO of Vista Equity Partners. “When we unify the souls of our two communities, we can usher in light to banish the darkness of racism, bigotry, and antisemitism. Every one of us plays a role in deciding what America will be and who we will become as one nation. And through our unity, we have the power to uplift communities and our nation and create a more harmonious and inclusive society which not merely accepts but celebrates differences,” he added.

“The Wiesel family stands now and will always stand with the Black community against racism and the lingering economic effects of slavery and segregation in this country, said Elisha Wiesel.  “And we are so moved to hear leaders in the Black community like Mayor Adams, Rev Sharpton and Rev Tillard speak out so strongly against antisemitism.  We are grateful because the Jewish people are under attack from all sides.  White supremacists on the right blame Jews for the dethroning of the white man and kill us in Pittsburgh and Poway while slaughtering innocent Black supermarket shoppers in Buffalo.  The Israel-hating extreme left tries to drive a wedge between our communities with the lie that Jews are racist oppressors; Jews get beaten up in Los Angeles and Times Square.  And the crazies say we’re not even Jews – leading to a stabbing in Monsey, a shooting in Jersey City, and endless beatings in Brooklyn.  This Chanukah and Kwanzaa let our communities show we stand ready to learn about and learn from each other, while holding proud to our traditions and values.  We encourage you to join together and #lightthecandles with us,” he added.

Republish this article
About The Publishers
World Values Network
Publish your organization's press release on JNS Wire
Releases published on the JNS Wire are communicated and paid for by third parties. Jewish News Syndicate, and any of its distribution partners, take zero responsibility for the accuracy of any content published in any press release. All the statements, opinions, figures in text or multimedia including photos or videos included in each release are presented solely by the sponsoring organization, and in no way reflect the views or recommendation of Jewish News Syndicate or any of its partners. If you believe any of the content in a release published on JNS Wire is offensive or abusive, please report a release.
Never miss a thing
Get the best stories faster with JNS breaking news updates