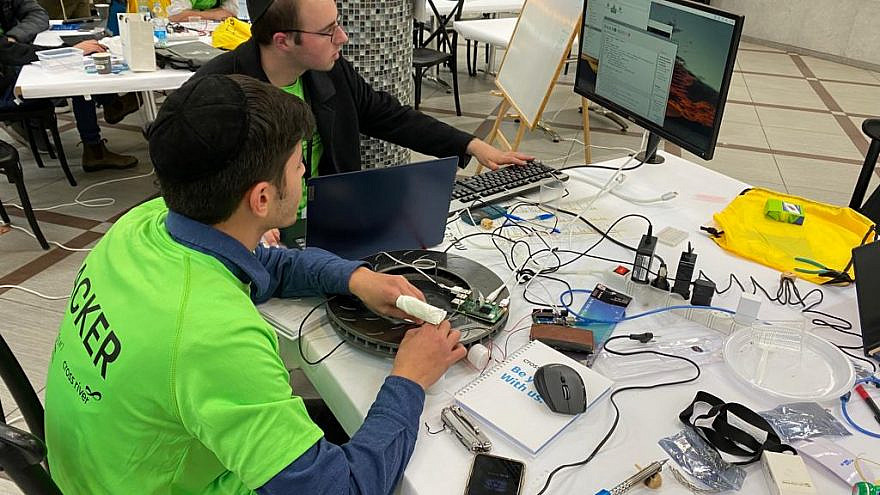 Inspired in part by the terrorist attack in Tel Aviv last May that included a several-hours, city-wide manhunt for the gunmen in which connecting, and mapping, video footage was of the utmost importance, the winning team (MAPPYLOC) created a potentially lifesaving system to automate data collection while cross referencing information being filmed between different cameras. The system, which was part of a challenge presented by Rafael Advanced Defense Systems, will then map out the precise route taken for an individual or even an object.

“We wanted to develop a solution where instead of having to watch hundreds of different tapes from different cameras, you can run them through a program where it tells you where a certain person or object on the video went and displays the route on a map,” said Yehuda Shani, a member of the winning team and a 3rd-year computer science major. “It is estimated that today there are over a billion security cameras deployed in the world…the amount of information we get from cameras today is astronomical. With this we can find a way to use what we have much more efficiently, saving tons of time, resources and potentially even lives.”

“At JCT, we place an enormous emphasis on providing hands-on skills and training to our students each year. Our industry partners are amazed each year by our students’ ability to build viable, working solutions to multiple challenges in such a short time,” said Orlee Guttman, co-founder of the LevTech Entrepreneurship Center and main organizer of the hackathon. “It’s a great experience for our students to bring to the job market when they graduate and/or from which to build their own startups.”

The ‘LifeLine’ team took home the second-place prize at the hackathon by working on a challenge from United Hatzalah which produced a digital system to track and monitor wounded individuals in a mass casualty event. When emergency forces arrive on the scene of an incident, they are required to catalog the victims according to the injury. The team of JCT students saw the system was outdated and developed a digital solution that will enable medical professionals to scan a patient’s personal tag and see their specific medical data and be able to insert additional data. Furthermore, the system will also track which ambulance the wounded individual goes on and which hospital or clinic they are going to.

“Too often critical data for patients can fall through the cracks when they are transferred between medical personnel or arrive at hospitals for treatments, which can be extremely dangerous,” said Yoshiyahu Moskowitz, who was part of the team. “This solution can really minimize human error and digitize the entire process, so no information is lost, and medics and doctors know exactly the background of a particular patient.”

The hackathon is run by the LevTech Entrepreneurship Center of JCT, which also includes a pre-accelerator program to help students turn their ideas into products and start-ups. The winners were selected by a panel of judges from successful Israeli and international companies.

Yoni Colb, General Manager of Cross River in Israel and a judge at the hackathon, said: “Cross River is very proud to be the main sponsor of the hackathon of the Lev Academic Center. As a significant employer in the field of fintech in Israel, Cross River is constantly looking for high-quality and creative employees. We currently employ many graduates of the academic center Lev, who have integrated into all parts of the company, including in significant management positions, and hope to continue the fruitful cooperation with the center in the years to come.”