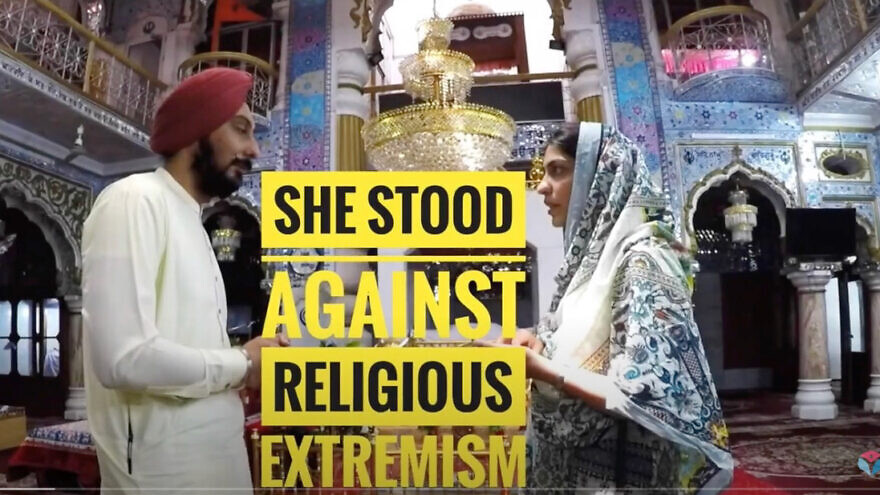 She Stood Against Religious Extremism tells the true story of a young woman in a war-torn region of Pakistan who starts an initiative to counter religious extremism and sectarian violence by holding dialogue sessions with youth from different beliefs and religions.

Without Fear captures the story of a Pakistani American woman and her struggles to escape oppression and fight for religious freedom.

The media projects submitted to the film competition came from thirty women who took part in Empower Women Media’s Pakistan Media Training Fellowship. For six months, these talented Pakistani women learned about Freedom of Religion or Belief and received expert training on how to produce contextualized digital media to reach their communities and world class leaders.

“We were amazed to witness the tenacity and creativity of the Pakistani women filmmakers,” said Shirin Taber, Director of Empower Women Media. “They took risks to share their women’s empowerment and religious freedom stories. Their films have the potential to change lives and shift the culture at large. We need more women media advocates like them!”

“Empower Women Media’s Religious Freedom Film Competition allows for a small glimpse into the phenomenal and tireless work that women are accomplishing in South Asia to ensure equality in regard to religious freedom and the practice of religious beliefs without persecution,” said judge, Dr. Karen Leslie Hernandez, Programme Officer in Partnerships and Interreligious Education, Religions for Peace International. “Behind and in front of the camera, this competition supports, ensures and empowers a vital platform for these important voices to be heard and it gives the viewer a rich and wonderful learning experience as well.”

Annie McKinney, Director of Communications and Operations for IRF Secretariat, said after judging the films: “What you all are doing is incredible and inspiring, and being a young woman in IRF myself, just to put it simply, thank you.”

The winning films will screen before civil society and faith leaders at the IRF Film Festival and Roundtable in Islamabad, Pakistan on June 19th. Selected films will also be showcased at the IRF Summit in Washington, DC, June 28-30.

Empower Women Media
Launched in 2013, Empower Women Media gathers women for networking, training, mentoring and collaborative purposes. We partner with United Nations, NGO and faith based organizations. We build relationships to leverage our talents and resources. We convene change agents and challenge them to create a practical plan for media engagement. As result of our network gatherings, trainings, mentoring and follow up efforts, several collaborative media projects have emerged for the Middle East and around the world.
Publish your organization's press release on JNS Wire
Releases published on the JNS Wire are communicated and paid for by third parties. Jewish News Syndicate, and any of its distribution partners, take zero responsibility for the accuracy of any content published in any press release. All the statements, opinions, figures in text or multimedia including photos or videos included in each release are presented solely by the sponsoring organization, and in no way reflect the views or recommendation of Jewish News Syndicate or any of its partners. If you believe any of the content in a release published on JNS Wire is offensive or abusive, please report a release.
Never miss a thing
Get the best stories faster with JNS breaking news updates