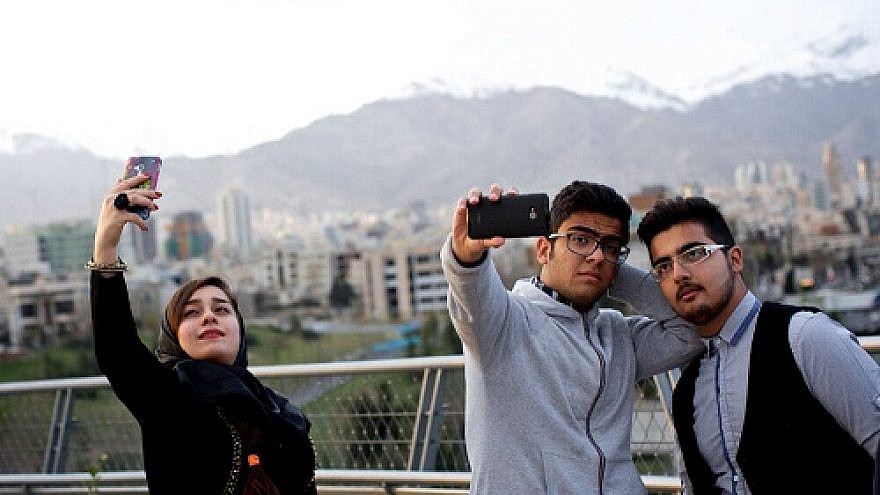 (March 23, 2021 / Jerusalem Center for Public Affairs) The weekly Sobh-e Eghtesad, the official newspaper of the Islamic Revolutionary Guard Corps’ Political Bureau, calls young Iranians born in the 1990s and the first decade of the 21st century a “serious threat” to the regime, stressing that it was difficult to impose power on them compared to previous generations.

In a March 7 editorial, the weekly refers to the extensive activity of these generations in cyberspace and emphasizes that the essence of their lives is an expression of dissatisfaction towards the status quo, and they “may well be exploited by Western enemies against the regime, both politically and culturally.”

Officials in the Islamic Republic have repeatedly warned in the past of the political and social consequences of the “inter-generational rift.”1

The Tehran-based newspaper Jomhouri-e Eslami on March 14 editorializes that in the Islamic Republic, like during the Shah’s regime, power is once again in the hands of 1,000 influential families, and the rest of the country’s citizens, however talented, never achieve important roles.

Recalling the Shah’s rule, the paper notes, “Experience proves that the concentration of power in the hands of a certain group of people and families does not guarantee the future of the regime.”

The article—titled “Uniting or Dividing the Lines?”—emphasizes that Iran’s constitution established a separation of powers to prevent the concentration of forces, tyranny and dictatorship, but in practice, “the dividing of political forces by two factions, known as reformists and conservatives, since the beginning of the regime, constitutes one of the biggest mistakes that has created many problems for both the state and the regime.”

The article notes that “the forces and people who do not wish to belong to one of these two factions are not given any opportunity and are turned away from activity in all areas,” and anyone who wants to serve the people finds himself facing a situation where he must identify with one of these factions, both of which have proven ineffective.

The newspaper further notes that the “monopoly on political activity held by famous, influential and wealthy families of the regime keeps talented people away from the service of the state and the people.”

The newspaper writes that the prevailing situation in Iran now resembles the conditions that Iranians recognized during the Shah’s period, and they saw what his fate was. The editor-in-chief of the newspaper calls on the regime’s systems to “wake up before it is too late, allow the integration of all forces and let society monitor the regime.”2

In the meantime, as the date of the presidential elections in Iran approaches, and President Hassan Rouhani’s government draws to an end, disagreements over his government’s conduct on domestic and foreign issues are increasing.

Following critical remarks made by Ali Shamkhani, secretary of the Supreme National Security Council, in interviews with the Iranian media about the regime’s conduct in the riots that erupted in Iran in recent years, Mahmoud Vaezi, Rouhani’s chief of staff, publicly called on General Shamkhani to “coordinate his remarks with the president.”

General Shamkhani had said a few days earlier that the riots that erupted after Rouhani’s decision to increase gas prices could have been prevented. He said it was possible to speak to the people correctly and explain to them the reasons and circumstances of the decision, but the president did not. Shamkhani implied that Rouhani was an arrogant man who sees himself above the people, and he unleashed an implicit barrage of criticism of the president that his government failed to run the country because of its strong dependence on oil export funds.

Similarly, on Jan. 13, the Foreign Ministry issued a statement critical of remarks made by Hessam Aldin Ashna, a presidential adviser, regarding the ways in which the dialogue with the United States was renewed. The Foreign Ministry stressed that only the ministry and its minister in charge are permitted to make suggestions on the subject, and that Ashna’s remarks were his personal opinion only.

A few days earlier, the president’s adviser said in an interview with the Hezbollah-affiliated Lebanese newspaper al-Akhbar that a timetable for reciprocal measures could be set for Iran’s return to the nuclear deal together with the United States and that the European Union would monitor the carrying out of commitments.

Hessam Aldin Ashna’s remarks were also criticized by Hossein Dehghan, former defense minister and military adviser to the Supreme Leader, who in an interview with al-Akhbar said that the United States must lift the full sanctions on Iran and there is no plan for the lifting the sanctions in phases. Dehghan, who announced his candidacy for president, expressed astonishment at Rouhani’s adviser, who, he said, had softened his stance toward the Americans and damaged Iranian interests.

In addition, the Foreign Ministry spoke out against the remarks made by General Mohsen Rezaee, a former commander of the Revolutionary Guards and secretary of Iran’s Expediency Discernment Council, who, in an interview with the British newspaper Financial Times, said that as part of a specific timetable for resuming talks with the United States, Iran may agree to a partial lifting of the sanctions, on the condition that, at the end of all stages, all sanctions will have been lifted.

At the same time as the impasse in the talks between Iran and the West on the nuclear issue is heating up, the Iranian presidential elections are picking up steam, and personalities from the security and military establishment continue to push their candidates for office.

Dehghan was asked whether the arrival of military personnel into the political arena indicates the danger they feel for the regime’s disintegration. He replied that the military usually carries out coups to restore order to the country. “IRI [the Islamic Republic of Iran] is so socially and politically powerful that it has not only survived despite all the problems posed by internal and external enemies, but is also on the path to progress.”

He added that Iran does not suffer from “disintegration that requires the presence of the military.”

After the resignation of IRGC General Saeed Mohammad from his command of the U.S.-sanctioned Khatam Al-Anbiya Construction Headquarters, the engineering firm of the Guards, to run for president, Hamid Reza Taraghi, a senior member of the Mo’otalefeh Eslami (The Islamic Coalition Party), claimed that General Muhammad had been removed from office because of his involvement in economic corruption.

He said that the Guardian Council, which is supposed to ratify the competence of candidates for elections, would “take the issue seriously” and would not make it easier to authorize Muhammad to run for office. Two days later, Taraghi denied his remarks. Common knowledge in Iran says that Khamenei is inclined to support General Mohammed as an innovative young man for the presidency, as has been emphasized several times in the Supreme Leader’s speeches over the past two years.