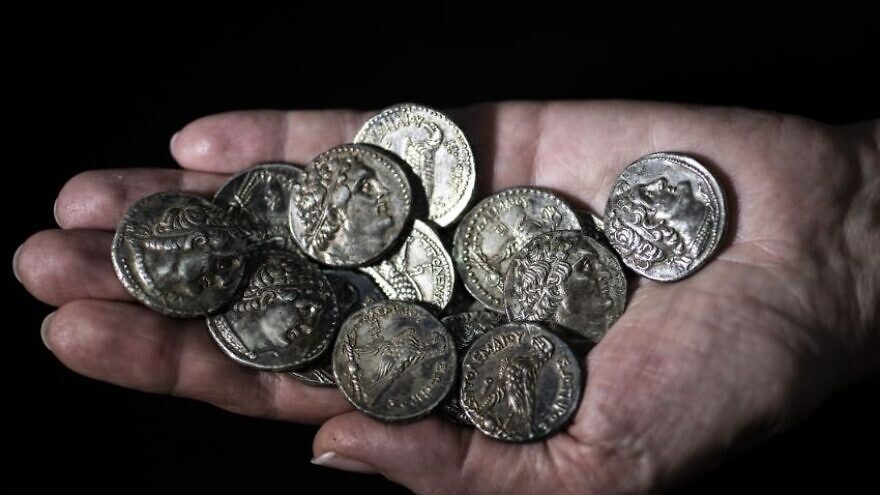 (December 13, 2022 / JNS) Israeli archaeologists have discovered a small hoard of silver coins in the Judean Desert dating to the reign of Antioch IV, the ruler of the Seleucid Empire at the time of the rebellion of the Maccabees.

The coins, 15 in all, were in a wooden container hidden some 2,200 years ago and uncovered during excavations at the Darageh Stream Nature Reserve overlooking the Dead Sea last May.

The unique, lathe-turned wooden jar was discovered in a crack in the cave. When the lid was removed, packed earth and small stones were found in the upper part of the box. Below this layer, a large piece of purple woolen cloth was found, covering 15 silver coins arranged with pieces of sheep’s wool.

The hoard comprised a homogeneous group of silver tetradrachms coins minted by Ptolemy VI, King of Egypt. Ptolemy VI reigned over Egypt at the same time as his uncle Antiochus IV Epiphanes (a title meaning “God Manifest” or “the Glorious/Illustrious”) reigned over the Seleucid Kingdom, including Judea.

The three earliest coins in the hoard were minted in 176/5 B.C.E., while the latest coin dates to 171/0 B.C.E—the year the Maccabean Revolt began.

The name “Shalmai,” in Aramaic script, was found secondarily incised on one of the coins. 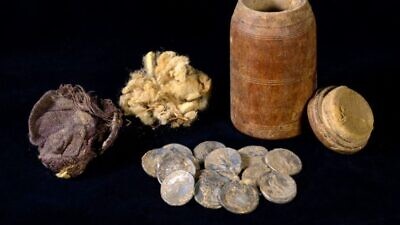 The coins and the wooden jar. Photo by Dafna Gazit/IAA.

“It is interesting to try to visualize the person who fled to the cave and hid his personal property here intending to return to collect it,” said Eitan Klein of the Israel Antiquities Authority, one of those who studied the coins.

“The person was probably killed in the battles and did not return to collect his possessions, which awaited almost 2,200 years until we retrieved it.”

Klein described the find as “absolutely unique” and the “first clear archaeological evidence” that the Judean Desert caves played an active role in the activities of the Jewish rebels in the early days of the Maccabean Revolt.