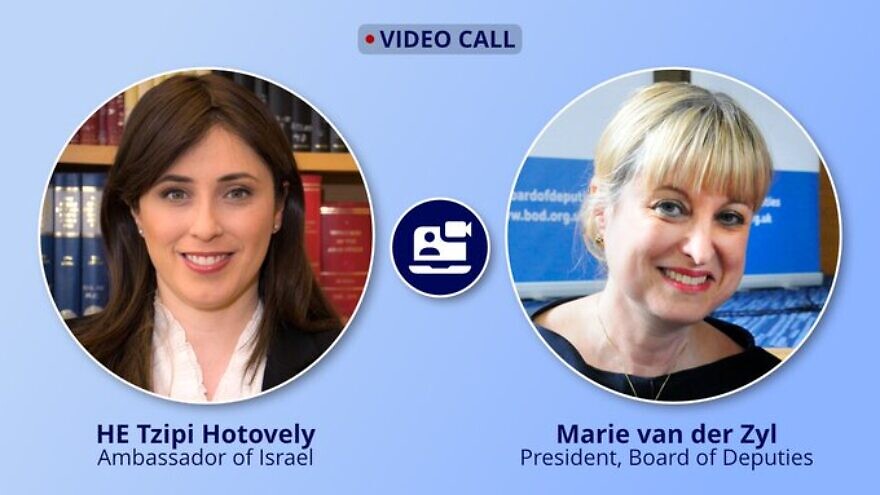 (October 12, 2022 / JNS) Some 50 leaders and members of Jewish U.K. youth groups have signed a letter to Marie van der Zyl, president of the Board of Deputies of British Jews, decrying her support for moving the British embassy to Jerusalem.

The signatories, claiming to be “the future leaders of the British Jewish community,” said they objected to the “inflammatory speech” in which she told attendees at a reception held by the Conservative Friends of Israel on the sidelines of the Conservative Party conference in Birmingham on Oct. 2, “We are really hopeful that the government is going to move the embassy, like America, to Jerusalem—the capital of Israel.”

Van der Zyl also told the assembled MPs it was the Conservative government that “proscribed Hezbollah in full, Hamas in full, and we are now hoping that they will also proscribe in full the IRGC.”

— Board of Deputies of British Jews (@BoardofDeputies) October 2, 2022

And on Sunday, the U.K. Movement for Reform Judaism also came out against moving the embassy to Jerusalem.

The movement said that it was “unequivocally Zionist and has a nonnegotiable commitment to Israel and its security. We believe the pursuit of peace in Israel is the highest ideal and priority.

“We are committed to two viable states as the only just and realistic solution to the present situation. Consequently, we would caution against the government taking action that might undermine peace in the region,” the Movement for Reform Judaism said.

The “Youth Letter to the President of the Board of Deputies” asks Van der Zyl to “consider the perspective of young British Jews before making such divisive remarks in a public sphere.”

The letter continues, saying, “There is a strongly held belief among significant numbers of young British Jews that, whilst Jerusalem is the capital of Israel, moving the UK embassy to Jerusalem would jeopardise the prospect of a political resolution to the Israel-Palestine conflict. To do so in the absence of a political agreement—regardless of which neighbourhood the embassy would be moved to—would be to recognise Israel’s sovereignty over the entire city, cementing the status quo….Recognising Jerusalem as Israel’s capital, whilst failing to recognise even the right to a Palestinian state, goes against claims to support two states.”

It also cautions that moving the embassy to Jerusalem would trigger Palestinian protests that would result in the loss of Palestinians’ lives, citing the riots on the Gaza border after U.S. President Donald Trump moved the American embassy to the city in 2018.