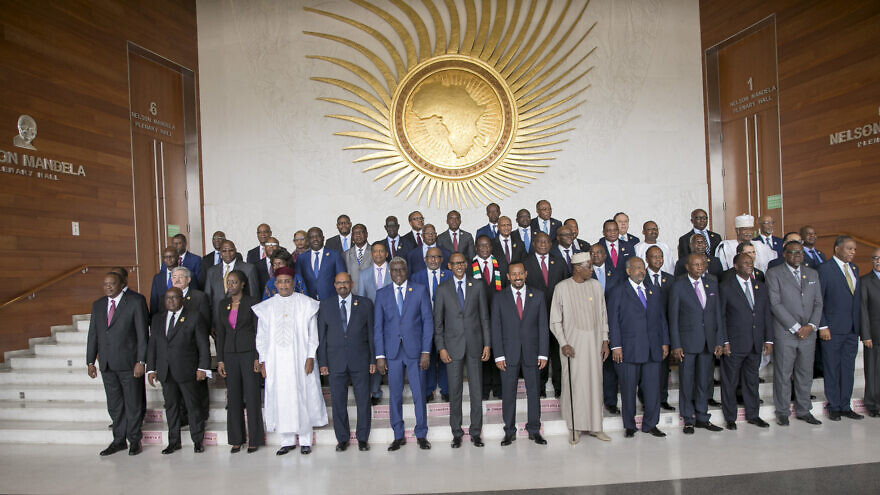 (February 9, 2022 / JNS) The African Union pushed off debate on a vote over Israel’s observer status at its meeting on Sunday. Instead, it set up a committee to examine the matter, which will report its findings at next year’s summit. Reports say the issue has proved divisive in the 55-member bloc.

The African Union granted Israel observer status in July. However, opposition to the decision only gained momentum recently, coming to a head at the day-two summit this weekend in Addis Ababa, which also celebrated the 20th anniversary of the member organization’s founding.

Although observer status in the African Union is not unusual and many non-African countries and groups hold observer status (“Palestine” being one of them) offering it to Israel created a stir—so much so that despite more pressing problems, the chairperson of the African Union Commission, Moussa Faki Mahamat, felt compelled to mention the issue in his opening address and put it on the agenda.

“South Africa and Algeria are the dominant countries trying to change this decision. South Africa, a very important member of the African Union, has since the 1990s taken a very hardline, anti-Israel stance,” Irit Back, head of the Inter-University Program of African Studies at Tel Aviv University, told JNS.

She said the two countries paved the way for Palestinian Prime Minister Mohammed Shtayyeh to address the summit on Saturday. He called for the African Union to reverse its decision, saying “Israel should never be rewarded for its violation and for the apartheid regime it does impose on the Palestinian people.”

Israel has been trying to win back observer status for 20 years, ever since it lost it when the Organization of African Unity was disbanded in 2002 to make way for its replacement organization, the African Union. Libyan leader Moammar Gaddafi was behind Israel’s original ouster, said Back, “and since then, we’ve been trying to regain our status.”

Back described observer status as “mainly symbolic,” a “stamp of approval.” Nevertheless, she noted that it comes with practical economic and diplomatic benefits. For instance, as an observer at the African Union, Israel has a greater ability to influence the bloc to change its generally anti-Israel voting record at the United Nations.

“So this can be a turning point. I’m not sure it will happen even if Israel is an observer, but it’s better to be inside than outside,” she said.

‘An instrument in the service of peace’

Efraim Inbar, president of the Jerusalem Institute for Strategy and Security (JISS), expressed reservations about Israeli efforts to join the African Union. “Africa is not as strategically important as other places,” he said. “The Horn of Africa is important for us. Morocco is important for us.”

Inbar says that if Israel wants to fight efforts to strip it of its newfound status, that’s fine as long as it doesn’t mean expending political capital. Israel should focus more on bilateral relations and less on seeking influence in multilateral organizations, he said.

Israel’s Foreign Ministry sees it differently. In a statement on Sunday, it said that “Israel attaches great importance to expanding the dialogue and cooperation with the African Union in line with changes in the Middle East and views it as an important expression of our shared activities for the continent’s next generation.”

Israel’s history with Africa goes back to the early years of the state when the country’s founding father and first prime minister, David Ben-Gurion, saw friendship with African countries as a way to break Israel’s diplomatic isolation. However, with the Yom Kippur War in 1973, Arab countries successfully pressured most African countries to sever ties with Israel.

That breakdown still casts a shadow over Israel-Africa relations. “It was a traumatic event from Israel’s side, and it still affects Israel’s attitude towards Africa. There is this kind of suspicion that it could happen again,” said Back.

She said a major milestone was Sudan joining the Abraham Accords. “Sudan is really important in this context because it’s part of the Arab League. It sometimes identified itself as an Arab country as well, not just an African country,” she noted.

Back said it was surprising when Israel gained observer status over the summer, and it’s equally surprising now that it might be taken away.

In his opening speech, Mahamat gave no indication of which side will eventually win. He both reaffirmed the group’s commitment to “the cause of the Palestinian people” and defended the decision to give Israel observer status, calling it “an instrument in the service of peace.”

Whatever happens, Back emphasized that Israel should invest more effort in forging ties with African nations and that the Foreign Ministry isn’t doing enough in this regard. “Israel actually needs to be more active and increase the importance of Africa in its foreign policy,” she said.

Inbar, however, maintained that Israel should not put too much store in the African Union, saying “Israel is doing quite well internationally, and we have some excellent relations with African countries.”