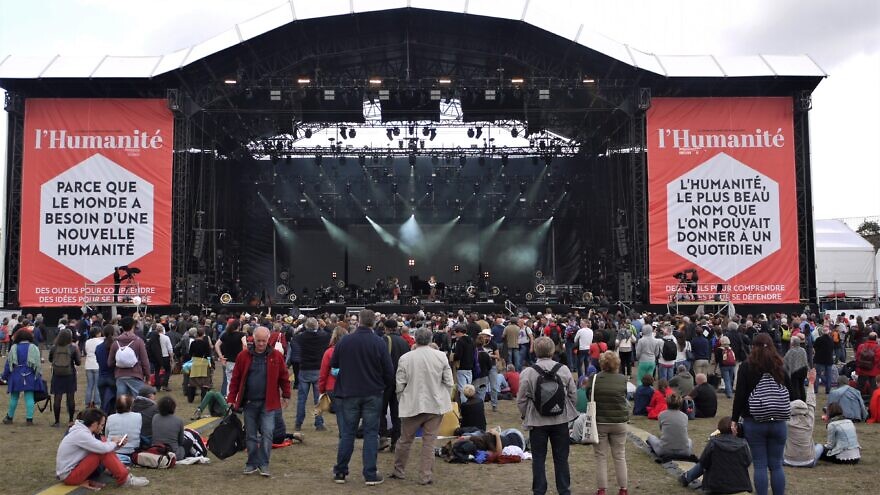 (August 23, 2022 / JNS) France’s BDS movement and the French branch of Amnesty International are raising eyebrows after announcing that they will be hosting a joint event at an annual music festival that is considered to be the largest public event in France.

BDS France announced on Facebook that it will host an event titled “How to End the Israeli Apartheid System?”

Billed as a meeting/debate, the event is scheduled for Sept. 10 at the BDS campaign’s stand at the World Village (Village du Monde) at the Fête de l’Humanité (“Festival of Humanity”) 2022, with speakers including European BDS Movement (BNC) Fiona Ben Chekroun and Amnesty International France president Jean-Claude Samoullier. The festival, hosted since 1930 by the left-wing newspaper L’Humanité draws approximately 800,000 visitors annually.

At press time, the event had only 10 people saying that they will attend and 12 that marked “interested.”

Amnesty International has drawn criticism over the past year for strong anti-Israel bias, including publishing a report that called Israel an apartheid state and accusing it of war crimes against the Palestinians during the 11-day conflict against Hamas terrorists in Gaza in May 2021.

The organization was also lambasted by the Jewish community and Jewish leaders when Amnesty International USA executive director Paul O’Brien told a group of attendees at a lunch hosted by the Women’s National Democratic Club in March that Israel “shouldn’t exist as a Jewish state.”

Simone Rodan-Benzaquen, general manager of AJC Europe, called out the organizations hosting the event on Twitter.

“By partnering with the anti-Semitic BDS movement, the Fête de l’Humanité and Amnesty International France demonstrate—once again—that they are no longer for the defense of human rights but more dubious ideological undertakings,” she tweeted.

Daniel S. Mariaschin, CEO of B’nai B’rith International, said in a statement to JNS that it should not come as a surprise that Amnesty International and BDS are partnering together.

“Amnesty has engaged consistently in a perverse campaign against Israel, the only democracy in the Middle East and a guardian of human rights,” Mariaschin said in an emailed statement. “The BDS movement in France and elsewhere is nothing more than a denier of Israel’s right to exist.”

Roz Rothstein, co-founder and CEO of StandWithUs, was also critical of Amnesty’s motives.

“This is further evidence that Amnesty shares the same destructive goal as anti-Israel extremists worldwide: eliminating Israel and stripping away the basic rights of Jews to self-determination in their ancestral home,” she said in an emailed statement to JNS. “This is not human-rights activism, but rather hate that harms Israelis and Palestinians alike. The organization should look itself in the mirror and stop betraying its stated mission.”