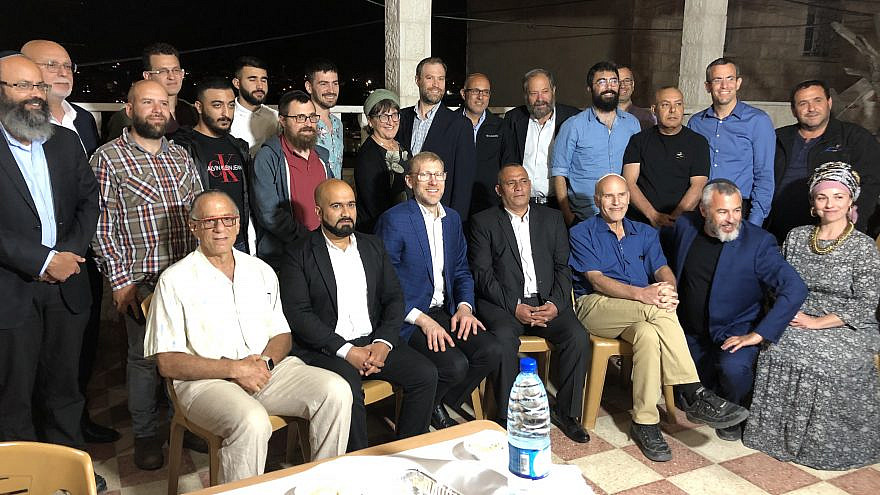 (April 21, 2021 / JNS) As the sun was setting over the ancient city of Hebron signifying the end of another day of fasting for devout Muslims during the holy month of Ramadan, hungry Palestinians were shuttling their guests from a meeting point in the city to a private and beautiful home to prepare for an Iftar feast, the customary sunset meal Muslims have to break their fast just after the call for evening prayers.

But at this particular gathering, the 75 or so guests weren’t only Muslims. Around half were Israeli Jews, primarily political and community leaders of the “settler” movement, Israelis who live and represent the Jewish communities of Judea and Samaria, more commonly known as West Bank.

The event was held at the home of Ashraf Jabari, a Palestinian businessman who, along with Israeli Avi Zimmerman, founded the Judea and Samaria Chamber of Commerce and Industry in 2017, a nonprofit organization dedicated to promoting economic development between Arabs and Jews in the region. Jabari’s home is within walking distance of Hebron’s Cave of the Patriarchs, a holy site for both religions.

The chamber organized the event to allow the participants, many of whom are actually neighbors but have limited interactions, as an opportunity to get to know each other in a social setting and also do some networking.

The Jewish guests entered the home and presented their hosts with gift baskets of chocolate and fruits before being shown to their tables, already displayed with strictly kosher food. The Muslims ate at separate tables with food prepared according to their halal traditions; however, it was only a matter of minutes before the diners joined each other’s tables to engage in conversation. 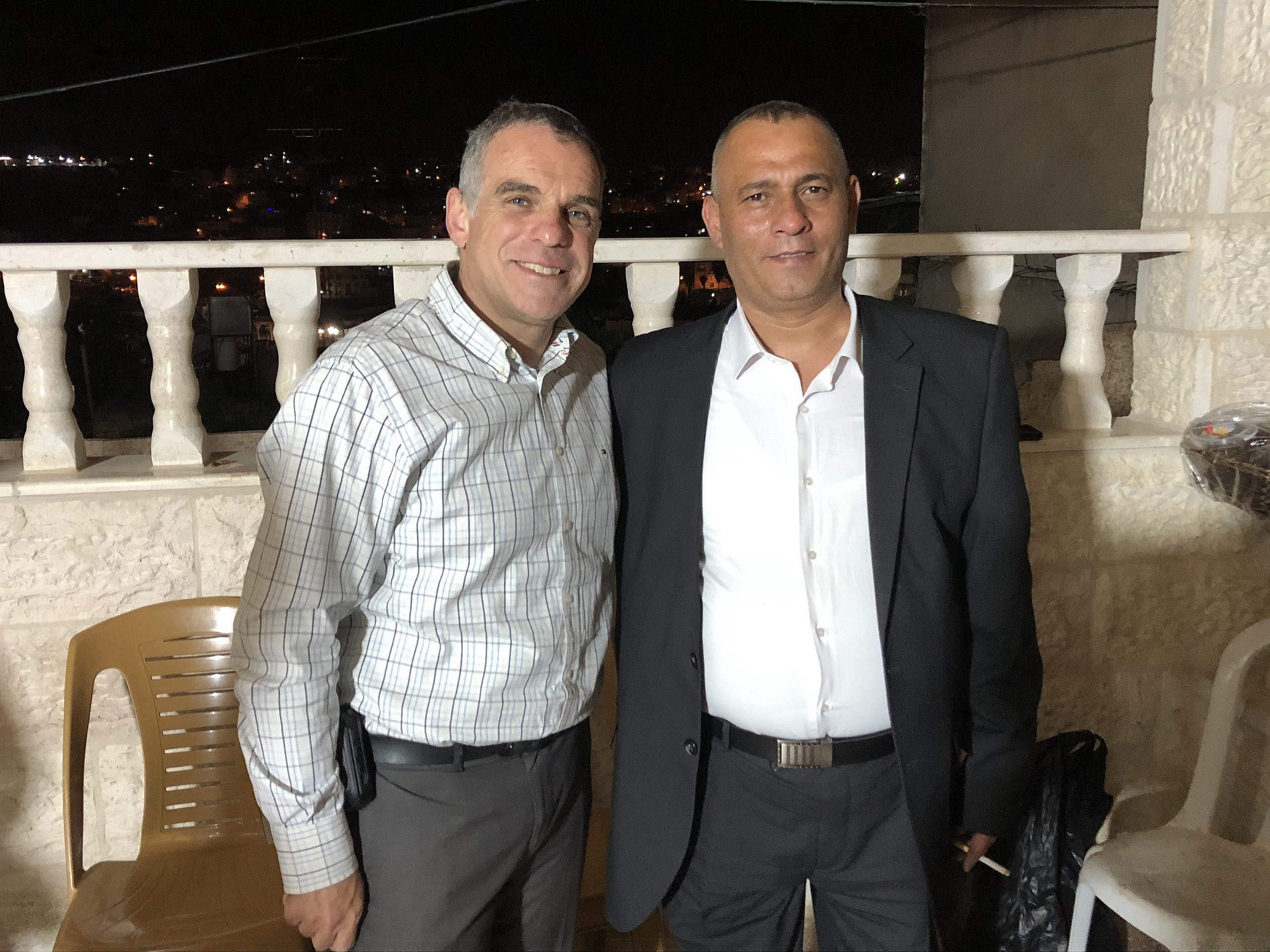 Some of the prominent representatives of the Israeli delegation included former government minister and Knesset member Ayoob Kara of the Likud Party, a representative of the Druze community; Efrat Mayor Oded Revivi; Rabbi Hillel Horowitz, mayor of the Jewish community of Hebron and a former Knesset member; and Yigal Dimoni, CEO of the Yesha Council, the official body representing Jewish communities in Judea and Samaria.

‘Strong Jewish and Arab nationalists get along’

While the media often focuses on the conflict between Jews and Arabs in Israel, Yishai Fleisher, the International Spokesperson for the Jewish community in Hebron and a guest at the event, told JNS that “part of the story that isn’t shared is that there are actually decent relationships between the two sides.”

He added that “there is an entire pro-normalization Palestinian narrative out there, but so many folks want to shut it down.”

Fleisher explained that the Palestinian Authority, along with far-left Jewish organizations, wants to thwart attempts at normalization. “So many Palestinians yearn for normalization, but they have their mouths shut tight” for fear of retribution by the P.A., said Fleisher.

He noted that the Iftar gathering was proof that “strong Jewish and Arab nationalists get along because we actually have a lot more in common. The settlers can talk about real peace and coexistence based on respect, liberty and clarity which will bring “Barakah,” the Arabic word for “blessing.”

Jabari spoke as well and told his guests “it was an honor that you accepted my invitation and came here. We prefer coexistence with our friends in Israel and those in the settlements. You are our neighbors and our friends, and we hope to continue towards a real peace between us.”

He also mentioned that he hoped to continue developing further business relationships between the two sides. 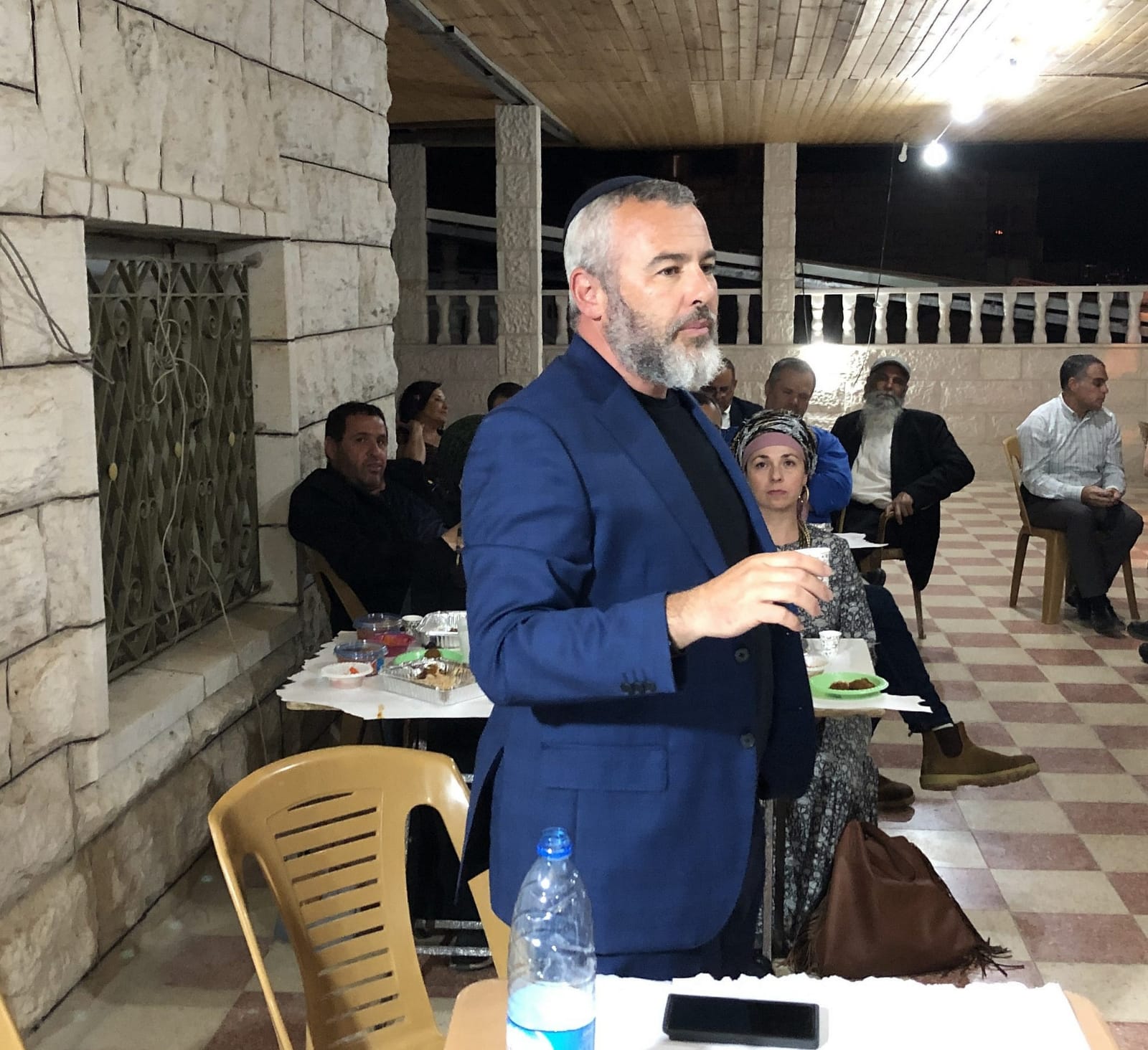 Yishai Fleisher, the International Spokesperson for the Jewish community in Hebron, raises a toast. Photo by Josh Hasten.

As the evening progressed and opportunities were given to both Muslim and Jewish guests to speak, Zimmerman opened his laptop to allow a group of businessmen and women who were chamber supporters abroad the opportunity to participate in the virtual event via Zoom. Some of those in attendance online included members of the Integrated Business Roundtable (IBR), a group of impact investors committed to developing the capacity for joint Israeli-Palestinian Initiatives in Judea and Samaria.

Regarding the significance of the Iftar event, Zimmerman told JNS that “for the past three years, Ashraf and I have been working to advance the regional business landscape through strategic inter-population partnerships. But the economic ecosystem doesn’t exist in a sterile laboratory environment. It’s powered by real people—people with a vision that reaches beyond the challenges of today and the ingenuity to turn good ideas into actionable business plans.”

He added that “tonight’s Iftar was a subtle celebration of thoughtful conversation, mutual respect and heritage-enhanced relationships. These are the building blocks of the emergent Israeli-Palestinian market.”

Sam Solomon, a businessman and non-profit professional who lives near Jerusalem, told JNS that he decided to attend the event because “I believe in grassroots person-to-person initiatives, which is critical in our society, and the best way to get there is through business opportunities.”

He said, “This event is a place where we can share similar values and get to know and understand each other. This isn’t a political solution, this is interpersonal. These types of efforts are very important.”

Solomon added, “Plus, I’ve never been to an Iftar before!”

Revivi had only praise for Jabari saying, “Just like Abraham (the forefather of both Jews and Muslims) who was a talented host managing to have everyone in his tent, Jabari is like Abraham who invited us all into his tent.”

He added, “We bless Jabari (the clan), that they will carry on hosting many people, and true peace will grow from bottom to top.”