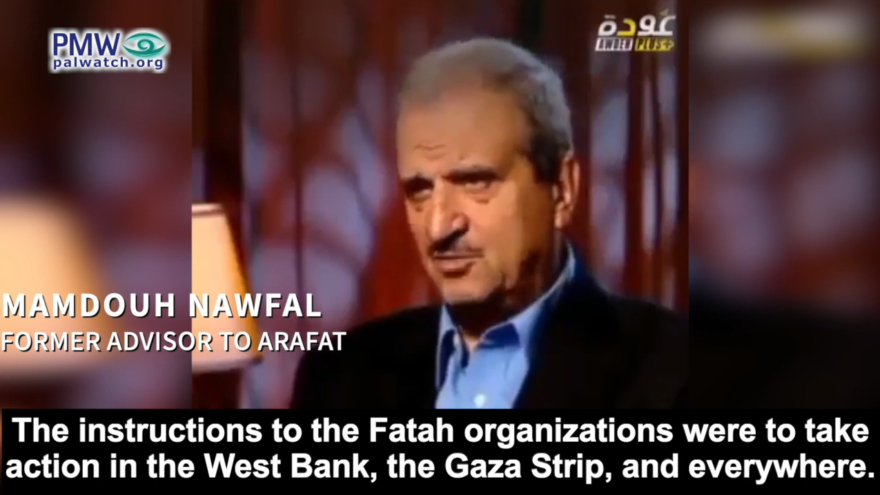 Mamdouh Nawfal, adviser on internal affairs to PLO chief Yasser Arafat in 2000, was the subject of a previous interview published by Fatah on Sept. 6, 2022. Source: Facebook Page of the Fatah Commission of Information and Culture via PMW.
Spread the word.
Help JNS grow!
Share now:

(September 14, 2022 / JNS) Mamdouh Nawfal, adviser on internal affairs to PLO chief Yasser Arafat in 2000, was the subject of a previous interview published this week by the Fatah Party.

Nawfal detailed Arafat’s determination to capitalize on then-Israeli Knesset member and later Israeli Prime Minister Ariel Sharon’s visit to the Temple Mount in September 2000 to launch what he expected to be a “long” terror campaign, reported Palestinian Media Watch (PMW) on Tuesday.

In the nearly five years of terror sponsored by Arafat, Palestinian terrorists and even by members of Arafat’s Palestinian Authority security forces, as many as 1,100 civilians in Israel were murdered on buses, at restaurants and other public venues.

PMW reported at the time—and has since added—extensive documentation that the Second Intifada was a terror campaign initiated and directed by Arafat, contrary to claims made by Western governments and some Israeli leaders who were misled into believing that the PLO head was unable to stop it.

In the interview broadcast initially by Al Jazeera on Feb. 3, 2009, and posted by Fatah on Facebook on Sept. 6, Nawfal described that on the day of Sharon’s visit to the Temple Mount, Arafat had already “dispatch[ed] many people under the name ‘Guardians of Al-Aqsa’ ” to initiate violence.

Said Nawfal: “The instructions to the Fatah organizations were to take action in the West Bank, the Gaza Strip and everywhere.”