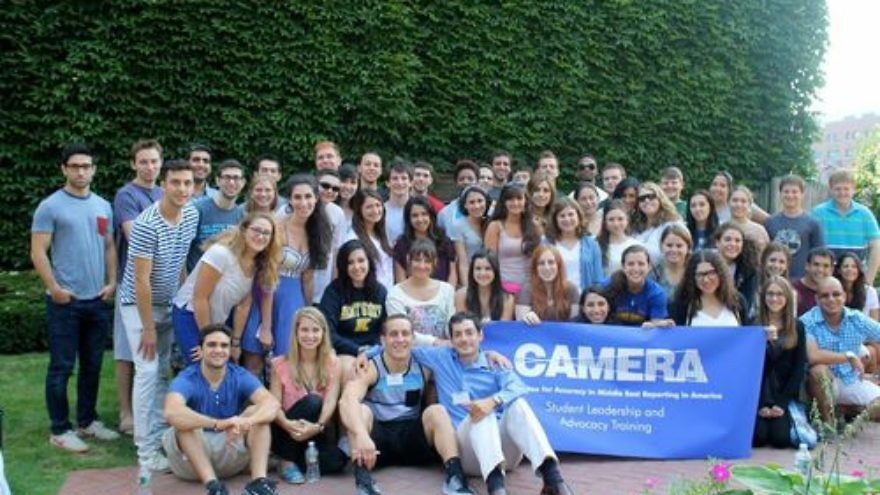 BOSTON—Lighting up the screen at Boston University Hillel is a progression map of Israel titled “Palestinian Loss of Land.” The image isn’t surprising to the students attending the annual Student Leadership and Advocacy Training Conference of the Committee for Accuracy in Middle East Reporting in America (CAMERA). Similar sights are frequent at their own schools.

Highlighting the growing need to combat anti-Israel campaigns on campus, and equipping pro-Israel students with the tools to motivate others to action, is the focus   of the student conference of CAMERA, the Boston-based media watchdog that seeks to promote accurate news coverage and commentary about Israel and the Middle East.

In attendance from Aug. 18-20 were students ranging from native Israelis, to those that have never been to the Jewish state, those planning their Birthright trip experience, and those that have already served in the Israel Defense Forces (IDF). Some pro-Israel students at the conference—like CAMERA Fellow Abraham Mercado, who was the only Jew among 8,000 students at Morgan State University before transferring to Florida Atlantic University—have faced significant isolation on campus.

After finishing his IDF service, Scott Ehrenberg, a CCAP student at CUNY Queens, asked himself how he could support Israel despite being back in the United States.

“The least we can do is to advocate for Israel,” said Ehrenberg, “to hold events on campus wherever we go to college in order to protect and support Israel’s name.”

Twenty-six of CAMERA’s yearlong Fellows joined the organization’s CCAP participants for the three-day conference to learn skills they can bring back to their campuses. According to CAMERA Regional Campus Coordinator Gilad Skolnick, “arguments of the heart and arguments of the mind are the best weaponry” in defense of Israel.

For the CAMERA Fellows, the conference marked the beginning of their yearlong program. Chosen for their commitment to countering anti-Israel activity at their schools, 53 students representing 39 colleges partake in a series of events meant to help them organize pro-Israel events like CAMERA’s “Less Hamas, More Hummus” campaign.

The campaign, which all Fellows are required to run on their campus, was inspired by student Ellie Rudee, the current president of Claremont McKenna College’s CCAP initiative, who drew on Hamas’s own materials to educate students on her campus about the biases against Israel in the media.

During the presentation, CAMERA Campus Director Aviva Slomich cued up a clip of a Hamas kindergarten graduation ceremony where children brandished automatic weapons and sang of their aspirations of death on behalf of Allah.

A graphic of a child in tattered clothes being stabbed in the neck by a Jewish star is just one example of the propaganda many students are presented from Students for Justice in Palestine (SJP) or other anti-Israel groups on campus.

“The SJP has risen up and become pretty prominent on campus,” said a CAMERA Fellow from Duke University. “I remember waking up one Monday morning and seeing they had posted an eviction notice on my door. It said something along the lines of, ‘You have 48 hours to get out of this dorm room.’”

The CAMERA conference’s itinerary was designed to present effective techniques to counteract the rise in SJP activity; Boycott, Divestment, and Sanctions (BDS) movement campaigns; and the proliferation of Israel Apartheid Week around college campuses in North America. Presentations included “How to Plan An Effective Event,” “How to Educate Yourself and Others,” and “Standing Up for Israel on Campus.”

“It’s not enough for Israel to defend herself,” said Michelle Soicher, a CAMERA Fellow at Concordia University in Montreal. “We need advocates internationally. It is important to fund people who want to educate themselves and the people on their campuses. It’s the idea of perseverance: it’s not enough to just be okay, we have to help Israel thrive and grow, and we have to change the, unfortunately, declining view of Israel internationally.”

Despite their accounts of anti-Israel sentiment on campus, the students seemed hopeful for the upcoming school year. Their ideas about increasing the integration of Jewish and Israel education in campus life bounced around the conference room. Many of these ideas were based on the use of social media outlets like Twitter, Facebook, Instagram and Pinterest to draw attention to facts about Israel and the Middle East.

“One of the biggest ways to get people to attend your event is to partner with other groups on campus,” said Eliana Butler, a CCAP student from the University of Chicago.

The consensus among the students was that establishing cooperation and communication with other groups on campus could act as a steppingstone to changing anti-Israel sentiment.

“You never know,” said CCAP student Chloe Valdary of the University of New Orleans, “some people that don’t necessarily agree with your politics may just end up your strongest supporters.”