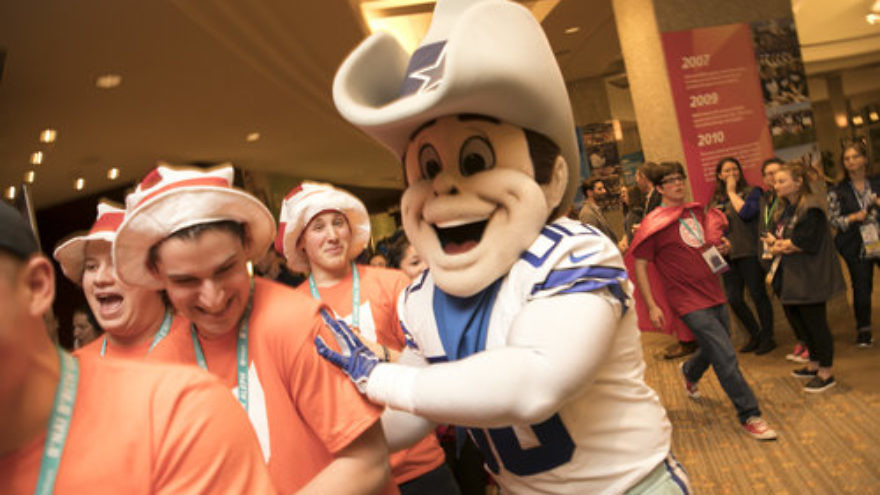 DALLAS—My interview with Aaron Mantell and Danielle Wadler, two teens from New York’s Long Island region, is drowned out by a parade of chanting students passing us by. Welcome to the BBYO International Convention.

Until this point, my experience at the Jewish pluralistic teen movement’s convention in Dallas largely consists of navigating a venue whose every inch is lined with teens, and giving up on any notion of using the hotel elevators. But now I understand and feel the true nature of this gathering of 5,000 people—including 2,500 Jewish teens—from 48 U.S. states and 30 countries.

“It’s a little overwhelming, but it always ends up being really really fun. Like you get past the overwhelming, and you get used to a thousand people screaming at you all day,” says Wadler, 17.

“It’s really impressive. It’s always mind-blowing. These people fly around the world to get here and have the most energy I’ve ever seen in teenagers,” says Mantell, 16, assessing his peers.

The enthused BBYO delegates who interrupt my talk with Wadler and Mantell, en route to the convention’s opening ceremony Feb. 16, are just the tip of the iceberg. The festivities are nothing short of the opening ceremony at the Olympic Games. The numerous American and international delegations outfitted with hats, capes and athletic jerseys, while they chant fight songs. Pop music blasting from the loudspeakers. Students dancing and singing on stage. Picture a rock concert, summer camp color war and high football game, all put together and multiplied by 10. It’s hardly my first major Jewish conference, but the energy is incomparable.

“I have not been in a room in my entire life with so many teens, so much energy and so much hope. Thank you for the hope! We need this gathering!” Jewish Theological Seminary Chancellor Arnold M. Eisen says at the opening ceremony, apparently agreeing with my sentiment.

But the BBYO convention is about more than energy and hope—it’s about vision and resolve. For five days, the student-led youth organization and its delegates come to hear prominent speakers at plenary sessions and hold smaller breakout discussions, sharpening their leadership skills and grappling with hot-button issues facing both the Jewish community and society at-large. The ultimate goal, according to this year’s convention tagline, is “Changing the Game.”

“The theme of the conference comes from our desire to put teens in control of their own destiny, to let them know that not only can they shape the Jewish community, but they can shape the world,” Matt Grossman, BBYO’s CEO, tells JNS.org. “In so many teen settings, they’re listening to adults tell them what they can do and what they can’t do, and they’re bound by different rules. Here, we put them in charge, we tell them that the future is theirs, and they respond in very powerful ways.”

In an increasingly borderless world, one of the hallmarks of both the 2017 BBYO convention and the organization’s growth trajectory in general is international expansion. This year’s gathering saw delegates from Austria and Poland for the first time.

“The power of the BBYO movement comes from the connectivity that exists between the teens, and a lot of that connectivity starts [at the convention],” says Grossman. “The global nature of what we offer is a differentiator in their lives. There’s nowhere else, or very few places, where a teen from Dallas, Texas, can find a best friend from Slovakia. But they come here and they can find that best friend, and then they can see them again during the summer experience, and they can connect with them online while they work on a project together. And that whole notion of connectedness is tied in a very real way to the notion of Jewish peoplehood.”

Fittingly, the youth movement’s top leaders—“International N’siah” Ellie Bodker of the BBG women’s order, and “Grand Aleph Godol” Aaron Cooper of the AZA men’s order—have spent their gap year between high school and college visiting BBYO communities in North America and around the world in order to strategize on growth and inspire the local chapters.

Cooper, 18, of Winston-Salem, N.C., is particularly moved by seeing BBYO’s operations in Hungary, whose estimated Jewish community of 100,000 is down from 800,000 before the Holocaust, but is thriving.

“Seeing our program there, and seeing that it’s been so successful, and it’s only been there for a year…I think is super beautiful and amazing and something we take pride in,” Cooper tells JNS.org. “It’s amazing to see us be a part of vibrant Jewish communities…but also the ones that still have the remnants of awful tragedy lurking in the back of their heads.”

After spending six weeks abroad in Europe and Israel, Bodker and Cooper are set to visit South America in the spring before their tour of duty ends in May.

“We have this global platform to run programs and inspire Jewish teens, that the more we see what’s out there, the more we’re inspired to dive into these issues and take action and get our task forces involved in what’s going on around the world,” says Bodker, 18, of Kansas City, Mo.

“This year especially [at the convention], we’re so focused on the global aspect, and incorporating people talking their native languages a little more, and embracing the diversity and uniqueness in the room has really been a focus,” she says.

The need for Jewish connectivity can also exist in places where one might not think such connection is lacking. Daniel Segal, 18, a youth leader for Maccabi Tzair, an Israel-based sister organization to BBYO, explains that the 25-30 different youth movements all cater to specific populations—except Maccabi Tzair, whose pluralistic nature mirrors BBYO.

Segal reflects that starting in 3rd grade, Maccabi Tzair taught him “how to manage working with people,” and by 8th grade, he was “not only part of a team, but the head of teams, and that position gave me skills for life.” Today, he oversees the efforts of 60 youth coordinators and 200 Maccabi Tzair program participants from 3rd-12th grades.

“The fact that you have many Jews [in Israel] doesn’t mean it’s not necessary for them to get informal education after school,” Segal says.

“We help them meet Judaism in a way that is proper to their life, where they can relate to it in a non-religious way,” echoes Noga Vieman, a Maccabi Tzair staff member.

International N’siah Bodker, who will attend Syracuse University in the fall and hopes to major in informatics, says that “I really found my voice” through BBYO.

“I think a lot of 8th grade girls start out really shy and uncomfortable with [BBYO], but the idea that people were listening to me and I could say whatever I wanted, and run a program on whatever topic I felt I was passionate about, was really appealing to me,” she says.

Before their international leadership tenures are complete, Bodker and Grand Aleph Godol Cooper—who will attend Brown University with the intent of later pursuing a law degree—hope to help BBYO meet its goal of surpassing 20,000 members around the world.

“It’s a special moment in Jewish history that 2,500 young people from across the globe can come together [at the convention] and celebrate what it means to be Jewish,” says CEO Grossman. “This is a place where they can be hopeful, they can be bold and they can be community-builders.”