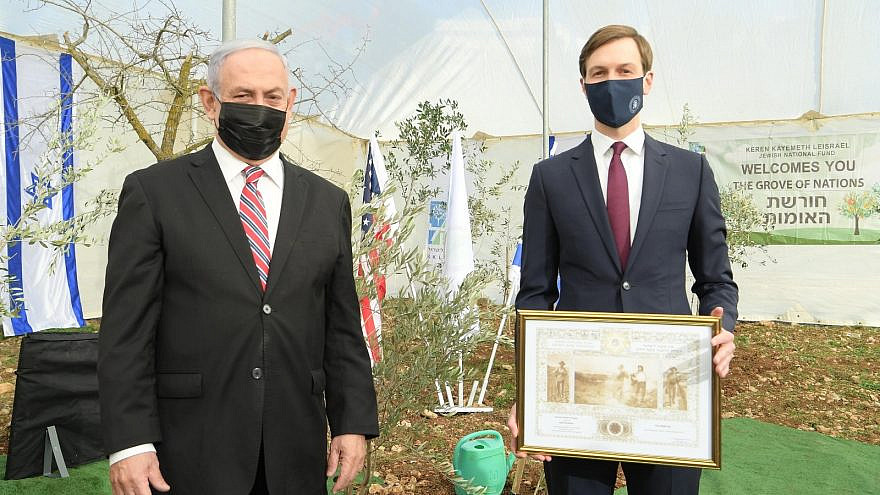 (December 21, 2020 / JNS) Jared Kushner, senior adviser to U.S. President Donald Trump, said that Jerusalem is not a source of division, but rather the key to peace in the Middle East, at a tree-planting ceremony at the Grove of Nations in Jerusalem on Monday.

“Jerusalem is not the cause of the problem, it is the core of the solution,” said the presidential son-in-law. While “some have used the cause of Jerusalem to divide, Jerusalem remains proudly open.”

He spoke at the ceremony with Israeli Prime Minister Benjamin Netanyahu a day before he was scheduled to travel on a special diplomatic flight from Israel to Morocco to sign the first documents of the normalization deal between the two countries. Earlier in December, Morocco became the fourth Arab country—joining the United Arab Emirates, Bahrain and Sudan—to normalize ties with the Jewish state.

“We are here in the Grove of Nations for the planting of 18 olive trees. Now the numerical value of the Hebrew letters for 18 is chai, which means ‘life,’ and the olive branch is a traditional symbol of life and peace,” explained Netanyahu.

“It is fitting that we choose to honor Jared Kushner in this way. Jared, you’ve played a critical role in the inception and in the implementation of the Abraham Accords. These accords have shown the world, and the entire Middle East of course, how to shed hostility and conflict and how to embrace the path of life and peace,” he said.

Kushner, who noted that he is the grandson of Holocaust survivors, said that he hopes that the recent peace agreements will continue to bear fruit for the region.

“The peace agreements that we have made are planted seeds that will sustain life and bear fruit if tended to correctly,” he said.

The Grove of Nations is found in the Jerusalem Forest and makes up a part of the Olive Tree Route, an initiative led by UNESCO and the Council of Europe to establish an Olive Tree Route around the entire Mediterranean basin expressing the common desire for peace and co-existence.