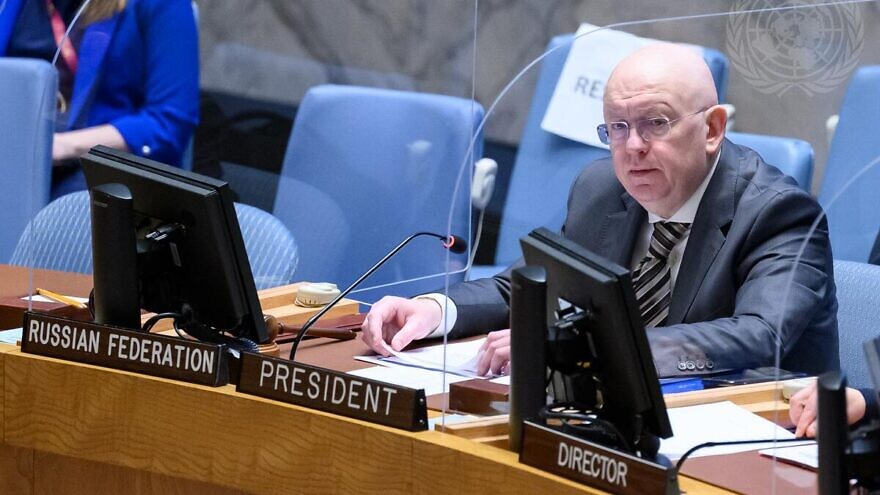 Vassily Nebenzia. Permanent Representative of the Russian Federation to the United Nations and President of the Security Council for the month of February, chairs the Security Council meeting on the situation in the Middle East, including the Palestinian question. Credit: UN Photo/Loey Felipe
Republish this article
1075 WORDS
Spread the word.
Help JNS grow!
Share now:

(February 24, 2022 / JNS) Russia denounced Israel’s sovereignty over the Golan Heights at a meeting of the U.N. Security Council on Wednesday, hours before it launched its invasion of Ukraine.

“We are concerned over Tel Aviv’s announced plans for expanding settlement activity in the occupied Golan Heights, which directly contradicts the provisions of the 1949 Geneva Convention,” said Russia’s United Nations envoy Dmitry Polyanskiy in a statement. “Russia doesn’t recognize Israel’s sovereignty over Golan Heights that are part of Syria.”

These were Russia’s first comments about Israel in the hours since the Israeli Ministry of Foreign Affairs released a statement voicing support for Ukraine’s sovereignty and territorial integrity on Wednesday, without mentioning Russia by name, in what was seen as an effort not to anger Moscow, which has allowed Israel to operate with a large degree of freedom in its attacks on Iranian targets in Syria.

Addressing the U.N. Security Council’s monthly briefing on the Middle East on Wednesday, Polyanskiy said, “Russia’s unchanging position, according to which we do not recognize Israeli sovereignty over the Golan Heights that are an inalienable part of Syria.”

#Polyanskiy: We're concerned over Tel Aviv’s announced plans for expanding settlement activity in the occupied #GolanHeights, which contradicts the provisions of the 1949 Geneva Convention. Russia doesn't recognize Israel's sovereignty over Golan Heights that are part of #Syria. pic.twitter.com/slHQSefJp5

The Security Council meeting came despite the fact that most of the international community’s attention was focused on the opposite end of the building, as the body’s General Assembly took up the Ukraine/Russia crisis.

Meanwhile, at the Security Council meeting, the Palestinian Authority ambassador to the U.N. Riyad Mansour used the occasion to slam Israel, notably wearing a mask printed with the words “End Apartheid.”

Mansour made sure to utter “apartheid” at every opportunity, attempting to capitalize on any anti-Israel momentum generated by a recent Amnesty International report which labeled Israel’s treatment of Arabs, both within the disputed territories and Israel proper. It is a claim, as Israeli Ambassador to the U.N. Gilad Erdan noted on Wednesday, that no one has taken up outside of the P.A. and designated terrorist groups.

“You can see the campaign that started here today on the mask of my counterpart. But make no mistake, this is a joint campaign between these organizations and the Palestinians with the mission of delegitimizing Israel as a Jewish democratic state,” said Erdan, adding, “Can anyone honestly look me in the eye and tell me that Israel, a country that protects the social and political equality of all of its citizens, is guilty of systematic injustice? A country in which Arab doctors, Arab members of parliament and Arab ministers serve alongside their Jewish counterparts. “ 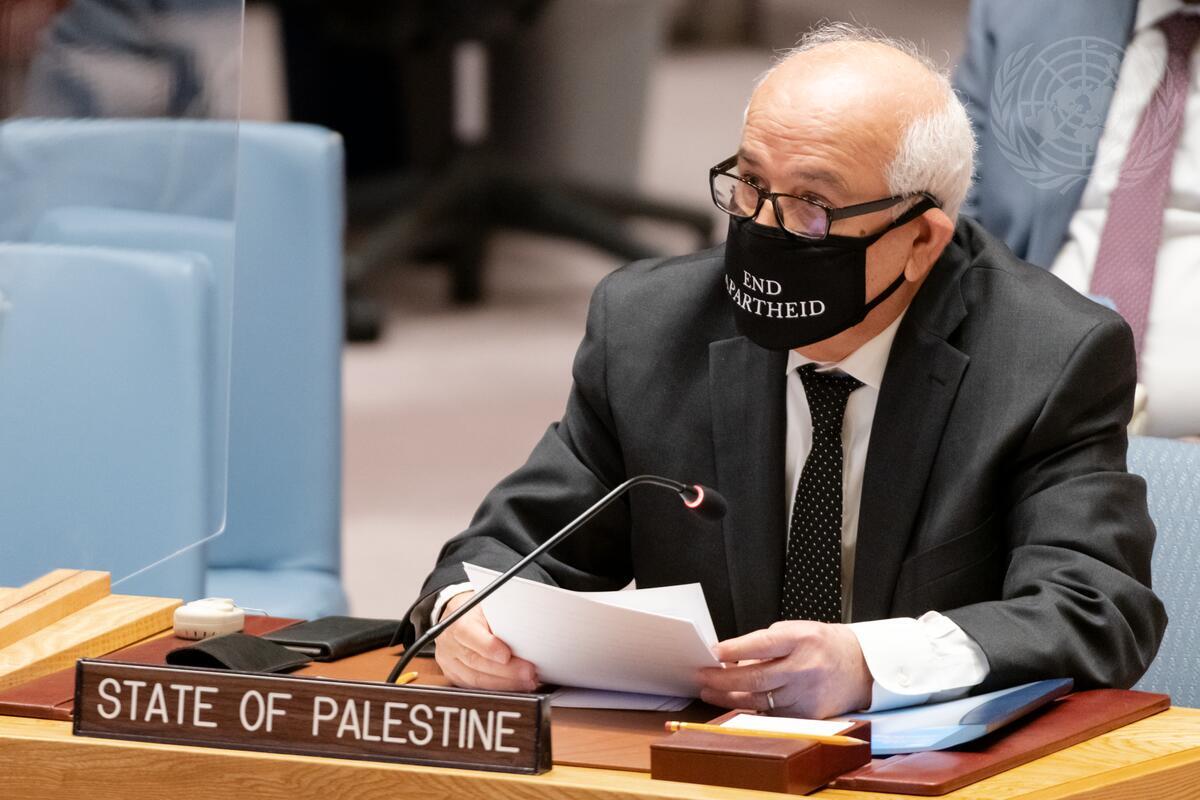 Riyad Mansour, Permanent Observer of the State of Palestine to the United Nations, addresses the Security Council meeting on the situation in the Middle East, including the Palestinian question. Credit: U.N. Photo/Mark Garten/Shutterstock.

Erdan went on the offensive against an open-ended Commission of Inquiry (COI) established by the U.N. Human Rights Council that was formed in the aftermath of last May’s Israel-Hamas conflict, in which the terror group that runs the Gaza Strip launched more than 4,000 rockets into Israel. The COI, however, will have the ability to investigate every Israeli government and military decision since the founding of the state, with a budget that is nearly double that of one-time investigations into human rights violations in Syria or Venezuela, Erdan noted. The COI is the first one ever launched by the UNHRC with no end date built into its mandate, and its appointed chair has regularly vilified Israel.

“Amnesty International, Human Rights Watch, and other so-called ‘human rights organizations’ have chosen to launch a Jihad war against the only vibrant democracy in the Middle East. Some of the very same organizations that could not find the time to write up reports on Syria, Myanmar, Iran or other horrific human-rights abusers, managed to find the time to write up hundreds of pages delegitimizing the existence of Israel. These recent reports have attempted to brand Israel with absurd claims and heinous accusations,” said Erdan.

The debate was originally scheduled to be closed. But the Palestinians requested that it be changed to an open format, and Russia, holding the presidency of the Security Council this month, acceded. Most Security Council ambassadors were at the General Assembly meeting on Ukraine and Russia, taking place at the exact same time, something not lost on Erdan.

“As we sit here debating legal disputes and false allegations, the clouds of unrest, violence, and war cast long shadows across the world. One might wonder what the urgency was to turn a closed monthly debate into an open one while such critical matters to global security are being discussed in the General Assembly as we speak. That being said, if we are here today to discuss the situation in the Middle East, then the real threat to the region must be the focus of this meeting,” said Erdan, turning the focus of the conversation to Iran’s growing nuclear program and other menacing activities by the Islamic Republic and its proxies throughout the region. 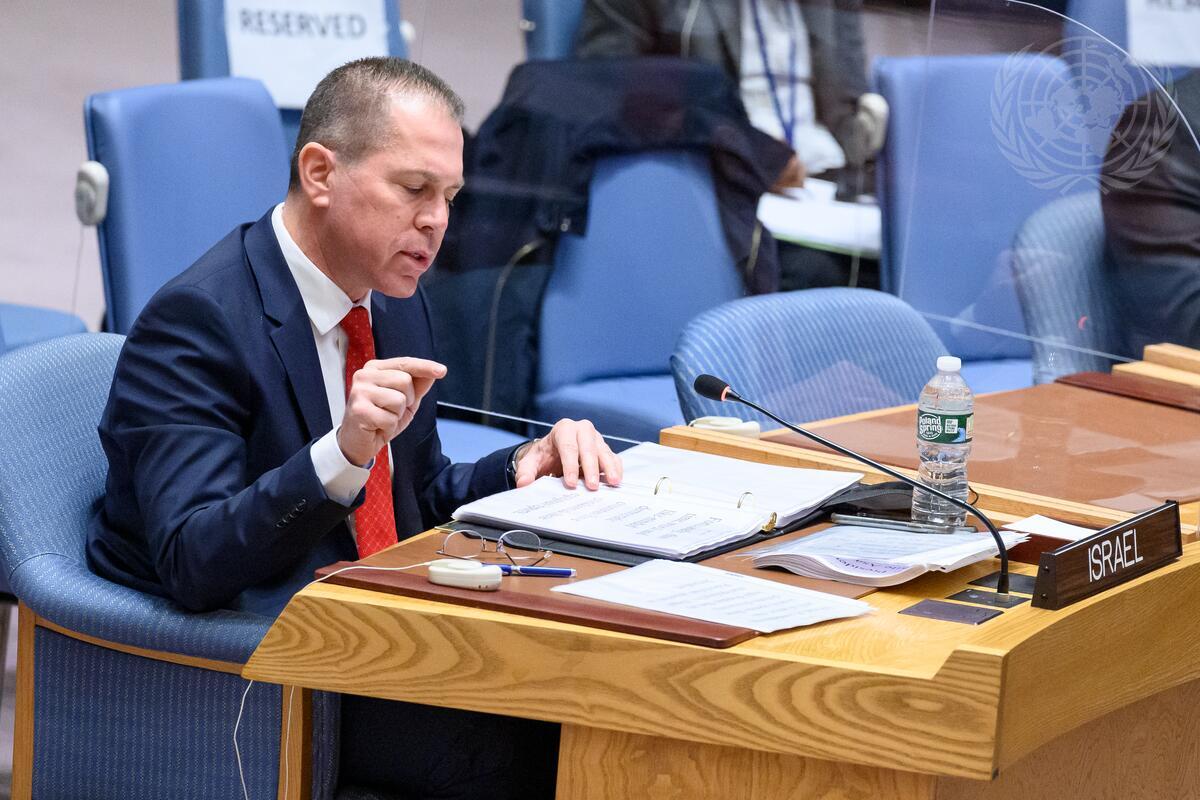 Gilad Erdan, Permanent Representative of Israel to the United Nations, addresses the Security Council meeting on the situation in the Middle East, including the Palestinian question. Credit: U.N. Photo/Loey Felipe

U.S. Deputy Ambassador to the U.N. Richard Mills was also critical of the diplomatic time and energy the monthly meetings on the Israeli-Palestinian file take up at the Security Council, saying, “The fundamental reality is that any solution must be agreed by the parties themselves. In this context, holding meetings for the sake of meetings is not going to help. But when the parties are ready to move forward, the United States will be here to support them.”

“These visits demonstrate that good-faith engagement can build confidence and create a path to cooperation towards greater security, prosperity, and dignity. In addition to these visits, we support the efforts by the signatories of the Abraham Accords to further their relationships through working groups and other initiatives to develop trade, cultural, and people-to-people ties. These deepening relations offer new opportunities for the people of the region,” said Mills.

Ghana called on Israelis and the Palestinians to resume peace talks, saying it supports the efforts of the Munich Group (Jordan, Egypt, Germany and France) to restart negotiations. China said it’s working with Egypt to provide COVID-19 vaccines to the Palestinians.