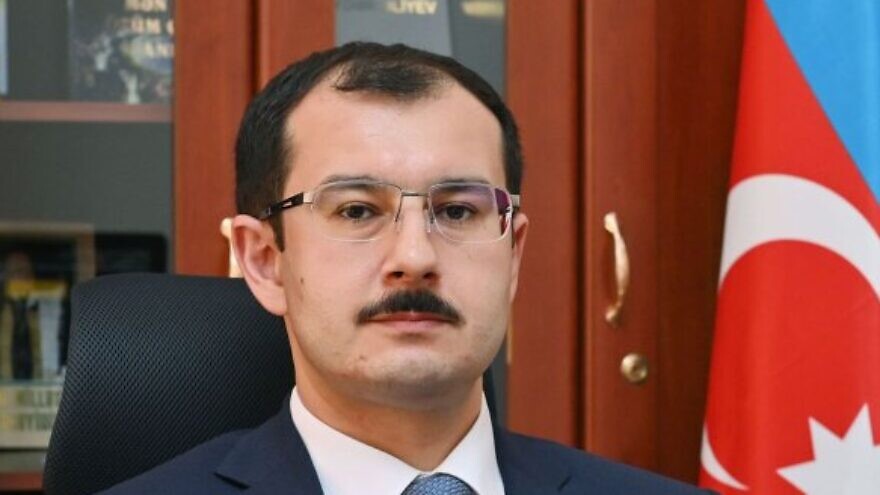 (January 18, 2023 / JNS) The newly appointed ambassador of Azerbaijan to Israel is expected to arrive in Tel Aviv next month, with Azerbaijan becoming the first Shiite Muslim country to open an embassy in Israel.

The landmark diplomatic event comes amid burgeoning relations between Israel and Azerbaijan, and escalating tensions and threats of violence against both countries by Iran.

It is the product of a three-decade-old covert and overt relationship, rooted in a centuries-long affinity between the two peoples, which has seen a robust security- and energy-related focus grow to include a diverse people-to-people relationship.

Ambassador Mukhtar Mammadov, the outgoing deputy education minister and a veteran of both the education and foreign ministries, is expected to begin working in February from the Azerbaijani trade office that already exists in Tel Aviv, officials said.

Israel has operated an embassy in Baku since 1993, the year after relations were established between the two countries. Indeed, Israel was one of the first countries in the world to recognize Azerbaijan’s independence in 1991 after the breakup of the Soviet Union.

For Israel, ties with Muslim oil-rich Azerbaijan—which shares a 428-mile border with Iran—are of strategic importance, as a conduit for intelligence (25% of Iranians are in fact Azeris), because it supplies Israel an estimated 40% of its oils needs, and as a leading purchaser of Israeli military hardware, particularly drones.

Over a decade ago, then-Foreign Minister Avigdor Liberman quipped that “Azerbaijan is more important for Israel than France.”

The upcoming arrival of the ambassador and the opening of the embassy prompted congratulatory letters from the Knesset to the parliament in Azerbaijan and back, both of which were signed by parliamentarians across the political spectrum.

“The opening of the embassy in Israel marks the beginning of a new phase in our bilateral relations, and is a vivid testimony to our cooperation entering a new level,” the Azeri letter reads.

It expresses appreciation for Israel’s support for Azerbaijan in its 2020 conflict with arch-rival Armenia and calls out Iran for its threats and its global terrorism.

“The most recent exacerbated anti-Azerbaijan rhetoric of the Islamic Republic of Iran and its conduct of military exercises along the Iran-Azerbaijan borders are a clear manifestation of the jealousy of certain countries and it reveals Iran’s true colors,” the letter reads. “We are pleased and inspired to receive your message of support in light of these provocations and rising threats against Azerbaijan. And for that we express our gratitude.”

Azerbaijan has been locked in a decades-old conflict with Armenia over the mountainous region of Nagorno-Karabakh—which is part of Azerbaijan but with a majority ethnic Armenian population who, backed by Armenia, had controlled the area for over a quarter century since a 1994 separatist conflict, aka the First Nagorno-Karabakh War.

In the 2020 Second Nagorno-Karabakh War, Azerbaijan, aided by arms, military experts and Syrian mercenaries provided by Turkey and drones from Israel—regained most of those territories, and a fragile if volatile truce brokered by Russia remains in place despite a renewed burst of violence this fall.

In the meantime, Armenia—which also borders Iran and has been feeling a cold shoulder from a Russia busy with the war in Ukraine—has been buttressing its trade with the Islamic Republic, which has reportedly gone up more than 40% in 2022 even as Yerevan seeks to maintain its good relations with Israel.

The earlier Knesset letter congratulates the Azeris on the embassy inauguration and highlighted the threats of the Islamic Republic to destroy both countries.

“Our congratulations to you our friends, the speaker and the members of the Azeri parliament, on the occasion of the decision to open the Azerbaijani embassy in Israel. This is a significant step in upgrading the courageous cooperation between the two countries and a natural continuation of centuries of friendship between the Azeri and the Jewish people and the Jewish community on the soil of Azerbaijan,” the letter states.

“We are facing a joint and dangerous enemy—the Iranian regime which seeks the destruction of our two nations and uses antisemitic propaganda in order to incite Azeris against their government. Yet these attempts have failed and Azerbaijan has proven over and over again that it will not be blackmailed by threats, and specifically at this time chose to open their embassy. Israel and the Jewish people thank you.”

Sevinj Fataliyeva, deputy chairman of the Azerbaijani National Assembly’s Foreign Affairs Committee, told JNS in a text from Baku, “Today Israel is a time-tested and reliable strategic partner for Azerbaijan.”

She cited as ties that bind the strong Jewish community living in Azerbaijan—one of the largest Jewish communities in the Muslim world—and the immigrants from Azerbaijan to Israel who remain connected to their country of birth.

“The opening of the embassy will bring cooperation to a completely new level,” Fataliyeva said.

National Assembly deputy Asim Mollazade, one of the signatories of the Azeri parliamentary letter, told JNS in an interview from Baku, “For thousands of years we have lived together as a family in peace, brotherhood and mutual respect. Our friendship, brotherhood and values helped us both survive in a very difficult region with evil and international terror threatening both Israel and Azerbaijan.”

He noted that over centuries of pogroms in Europe, Jews settled peacefully in Azerbaijan and maintained those ties to the present day, when antisemitism is again rising throughout the world.

Mollazade pledged, in the wake of the 2020 Abraham Accords that saw Israel normalize relations with four Arab countries, to work to further additional relationships between Israel and additional Arab countries. He also noted how Israelis were at home visiting Baku alongside Turkish and Pakistani tourists.

The good relations between governments have completely filtered down to people-to-people diplomacy, Mollazade said, noting the consensus among Azerbaijan’s government and opposition regarding Israel ties.

“It is restoring a historic brotherhood,” he said.