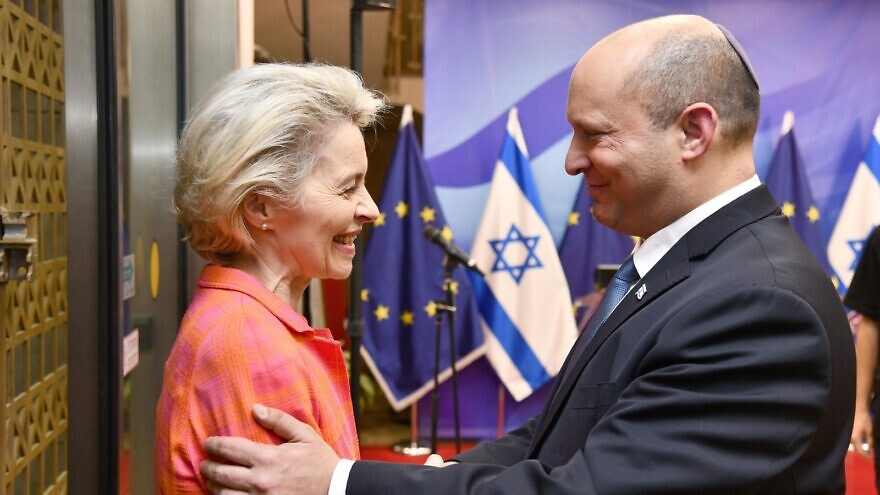 The two held a private meeting followed by an expanded one, according to the statement. Among the topics discussed were strengthening bilateral relations and the need to enhance cooperation in several fields, including innovation, climate change and sustainability.

“With the ongoing and devastating war in Ukraine come vast global implications,” said Bennett in a joint statement to the press with the EU commissioner. “It’s time for the international community to work together. …[E]ven in our region, we’re seeing a potential for great famine and distress that could have profound implications for people’s stability and welfare, which is why today both of us will be discussing ways the E.U. and Israel can cooperate on food security, energy and more.”

Bennett also briefed von der Leyen on Iran’s actions in the region, and reiterated his call for the international community to take a “hard line” against the regime and its accelerated nuclear program. He also thanked European leaders for their recent decision to censure Iran at the International Atomic Energy Agency Board of Directors’ meeting last week.

“This decision came after Iran refused to give the IAEA satisfactory explanations for traces of uranium found in sites that Iran failed to declare,” said Bennett.

“If hiding information wasn’t enough, the Iranian regime also threatened to retaliate if the IAEA were to vote against them. And when the IAEA indeed voted against Iran—Iran responded by turning off 27 surveillance cameras from nuclear sites across the country. Essentially, cutting off the international community’s ability to see what Iran is doing. This is a very dangerous move,” he added.

“Iran’s belligerent actions should be a wake-up call for the international community and should be met with clear and strong consequences—increased pressure and holding Iran accountable at the U.N. Security Council. The only way for Iran to be stopped is if we act and stop them,” he said.

He concluded his remarks by stating that Israel and Europe were on a “very strong and positive trajectory.”