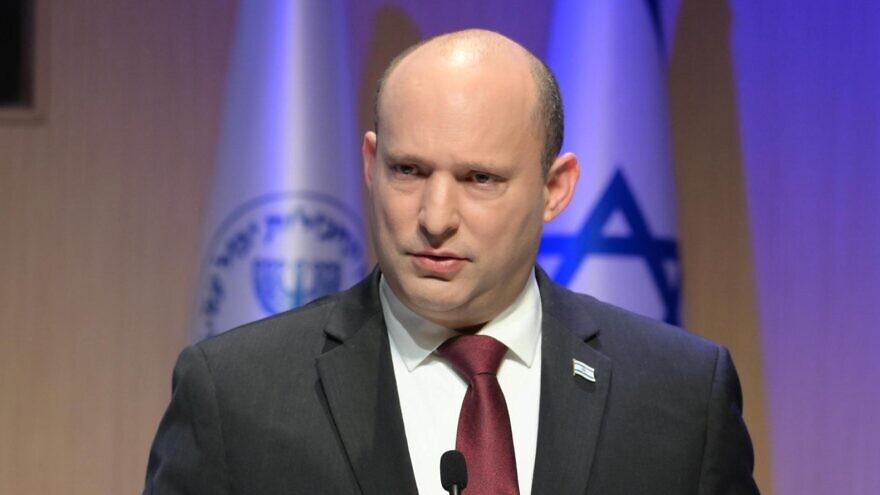 (March 2, 2022 / JNS) Israeli Prime Minister Naftali Bennett said on Tuesday that the critical juncture regarding Iran’s nuclear program was at hand, and reiterated that the Jewish state would not be bound by any agreement reached in Vienna.

Speaking at a ceremony at the Mossad intelligence agency’s “Advanced Technologies and Innovation Event,” attended by senior security officials, Bennett said, “While one of our eyes—like the whole world—is on Kyiv, the other eye watches, tensely, at what is happening west of there, in Vienna.”

For Israel, said the prime minister, “There is no such thing as ‘sunset,’” referring to the so-called sunset clauses of the 2015 Joint Comprehensive Plan of Action nuclear accord, lifting all restrictions on Iran’s nuclear program after a set number of years have elapsed. “The sun will not set on Israel’s security and the well-being of its citizens,” said Bennett.

Echoing past statements, Bennett reiterated that any agreement reached in Vienna between Iran and the world powers would not be binding on the Jewish state. “And the date—two and a half years from now—which allows Iran to assemble countless centrifuges, certainly does not bind us,” he added.

Israel’s security establishment, he continued, faces many tests over the coming years—as well as in the “near future.”

“I wish we could leave them in the theoretical or experimental dimension only. But as it looks right now, your hands will be full. The big—monumental—task that lies on your shoulders is to prevent Iran from going nuclear. This is a task you have been dealing with for many years, but we seem to be approaching the moment of truth … As far as I am concerned, you—together with the IDF, of course—are the address. The mission is on you.”

Returning to the subject of Russia’s invasion of Ukraine, Bennett said, “As the world becomes, almost overnight, gloomy and dangerous, our appreciation of the importance of power and strength increases in us all.”

“A few hours’ flight from here, in Kyiv, the world order is undergoing a huge upheaval. From the beginning, the State of Israel has taken a measured and responsible approach, which allows us not only to protect our interests, but also to be useful. To be a reliable player, one of the few that can communicate directly with both parties, and assist as required. Indeed, help—quietly,” said the prime minister.

On Tuesday morning, he noted, Israel had sent three planes full of humanitarian aid, mostly medicines, to Ukraine. More aid would be sent as needed, he said, adding, “We are also preparing to provide humanitarian assistance on the ground and, of course, to facilitate the immigration of Jews, from all relevant places.”

Bennett ended his address on a more optimistic note, saying, “precisely when it seems that the world is going in worrying directions, the State of Israel is on a straight path and ascending. In every dimension, the last year is a year of leaps and bounds: in economic growth, security, political stability and our determination to unite Israeli society, calm the discourse and find unification and not division. Therein lies our true resilience, there lies our strength. And we will need it.”