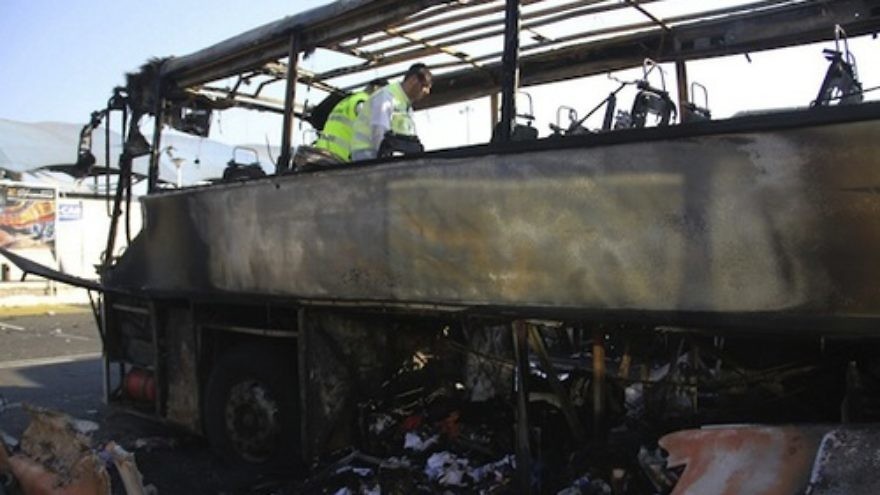 Israeli emergency rescue team members are seen in the area of the terrorist attack in Burgas, Bulgaria, on July 19, 2012. The attack, carried out a day before, claimed the lives of seven people, five of them Israelis, and left 34 wounded, two of them seriously. Photo: Dano Monkotovic/Flash90.
Spread the word.
Help JNS grow!
Share now:

(September 21, 2020 / JNS) A Bulgarian court sentenced two Lebanese men to life in jail on Monday for a 2012 bus bombing at the Burgas Airport that killed seven, including five Israelis, and wounded at least 35 additional Israelis.

The two men, Meliad Farah, 39, an Australian citizen, and Hassan El Hajj Hassan, 32, a Canadian citizen, whose whereabouts are unknown, were tried in absentia for the attack, in which 35 additional Israelis were wounded, reported Reuters. While Hezbollah has denied responsibility, Chief Prosecutor Ivan Geshev said last month that the evidence proves Hezbollah gave financial and logistical support for the attack.

The judge did not mention Hezbollah in the ruling, but the prosecutor’s office said evidence “showed that the two defendants … had links to the radical wing of [the] Shi’ite group,” the report said.

The two were found guilty of being accomplices and ordered to pay compensation. Another man who held Lebanese and French citizenship died in the blast when the bomb he was carrying in his backpack exploded.

“The court’s sentence reflects the punishment we asked for and is adequate to the committed crimes. Whether it will be served or not will be a result of the search of the wanted persons, which is ongoing,” Prosecutor Evgeniya Shtarkelova said, according to the report.