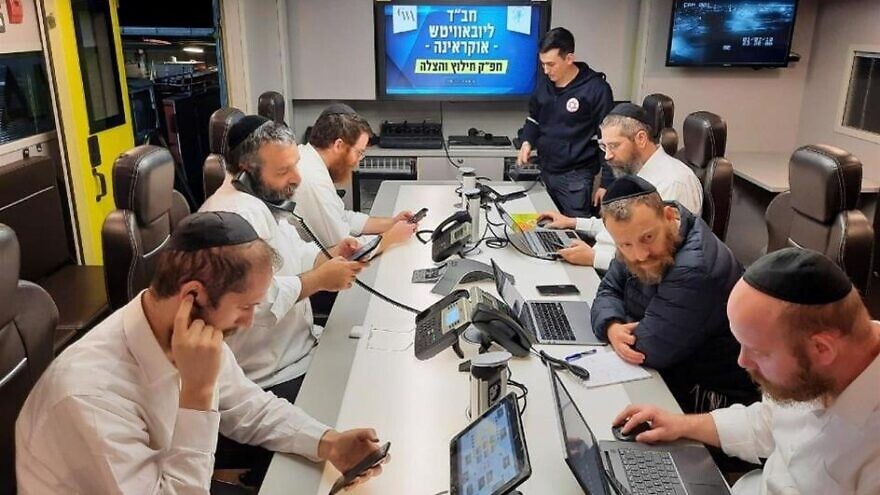 Emergency hotlines connect the Jews of Ukraine with Chabad’s boots on the ground at high-tech crisis-management centers like the one above in Kfar Chabad, Israel. Credit: Chabad.org/News.
Republish this article
664 WORDS
Spread the word.
Help JNS grow!
Share now:

(March 11, 2022 / Chabad.org/News) As shelling continues in beleaguered Ukraine, many have fled to neighboring countries along an often treacherous journey that takes days to traverse. Still others have been unable or reluctant to escape, while men aged 18-60 must stay and help with the war effort. A humanitarian crisis is well underway, with people in some cities desperate for food and medicine, and those who can leave searching for the safest route out.

In the Israeli village of Kfar Chabad, in the Ukrainian city of Dnipro and in the Crown Heights neighborhood of Brooklyn, N.Y., dozens of Russian-speaking volunteers coordinated by the Chabad-Lubavitch-affiliated Federation of Jewish Communities (FJC) sit in high-tech crisis-management centers, staffing emergency hotlines and connecting the Jews of Ukraine with Chabad’s boots on the ground. Whether food, evacuation, refugee aid, housing or medical assistance, the crisis teams work day and night to get them the help they need.

The teams aren’t a reactive solution; they have been personally calling every Ukrainian Jew they can to help suggest a path to safety, and patiently explaining the dire hour to elderly Jews who remain reluctant to flee.

“This is a matter of life and death, quite literally, and we see that with every interaction,” says Rabbi Eli Wolff, who works at the Kfar Chabad center. “One of our staff here called a fellow in a small village and convinced him to leave. An hour after the man left, his house was shelled.”

According to Wolff, as a second bloody week of war comes to a close, fewer people need convincing as it has become increasingly clear that to stay home is not tenable. 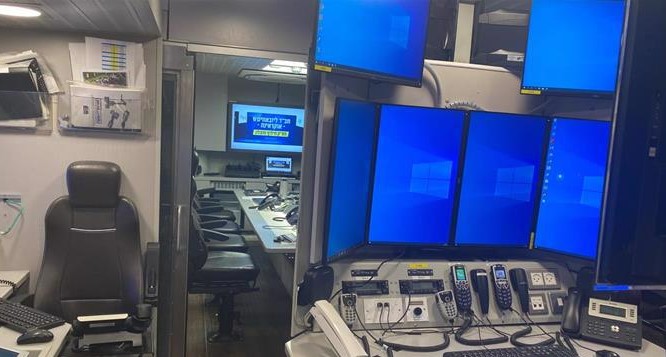 When the scope of the operation grew in response to the worsening conditions on the ground, Israel’s emergency-services arm—Magen David Adom—sent a mobile command center to Kfar Chabad containing advanced communications equipment, including satellite technology to reach areas where standard communications networks have been knocked out.

At the center, staff members have different tasks, and all work closely with Israeli government agencies as well as with NGOs. Almost everyone in the office is fluent in Hebrew, Russian, Yiddish and a handful of other languages.

When working to arrange food, transportation and other assistance to those still within Ukraine, they liaise with Rabbi Mayer Stambler, who heads the Federation of Jewish Communities of Ukraine, and his team at the Dnipro command center, under whose umbrella the humanitarian efforts within the country are coordinated.

All services for those in the refugees waiting at the Ukrainian side of the border are handled for the FJC by Rabbi Mendy Glitzenstein, co-director of Chabad of Chernovtzy (Chernivtsi), Ukraine. Matters relating to refugees in Romania are coordinated by Rabbi Shalom and Chani Gopin, the erstwhile rabbi and Chabad representative in Lugansk; and Rabbi Pinchas Vishedski, who with his wife, Dina, directed Chabad of Donetsk since 1993. Both rabbis’ cities were the center of intense fighting in 2014 when they were taken over by rebels, and the two reconstituted their communities in Kiev.

Flights to Israel are coordinated by the FJC’s Rabbi Chaim Friedman, who also oversees the many logistical issues related to bringing new immigrants to Israel.

“Magen David Adom, as the Israeli Red Cross, operates this international center together with Chabad emissaries and will continue to support those in the war zone,” said Eli Bin, director-general of Magen David Adom. “I hope that the use of these advanced technologies in our mobile command center will provide the aid the Ukrainian people need and help them reach safe shores.”

“Chabad has been at the front lines of the effort to assist Ukrainian Jews since the beginning,” says Rabbi Shlomo Peles, Chabad’s point man spearheading the relief effort from Israel, along with Rabbi Yehuda Blau. “We are working around the clock for Ukraine’s Jews.”

The Ukraine Jewish Relief Fund has been established to help provide assistance to the Jewish communities in Ukraine impacted by the war.