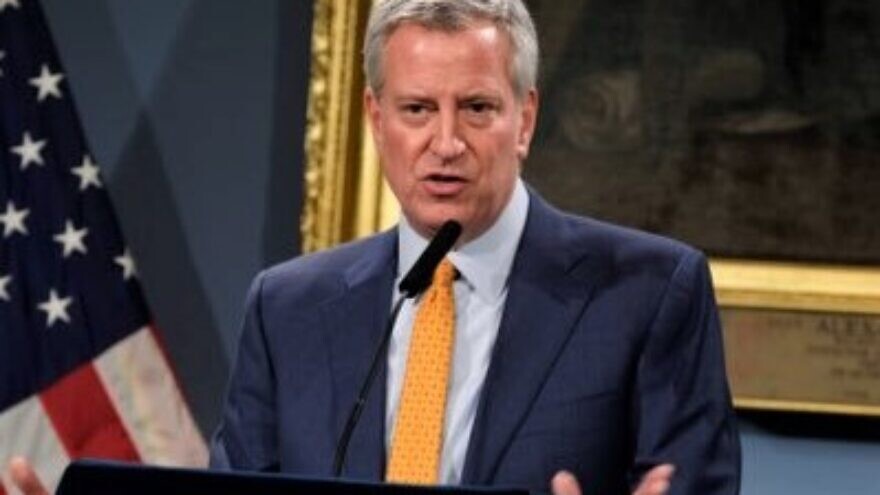 (May 20, 2020 / JNS) For the second time in almost as many weeks, New York City Mayor Bill de Blasio has come under scrutiny for actions some say are targeting the more than 1 million Jews in the city.

In a tweet on Monday night, de Blasio wrote, “Earlier today the NYPD shut down a Yeshiva conducting classes with as many as 70 children. I can’t stress how dangerous this is for our young people. We’re issuing a Cease and Desist Order and will make sure we keep our communities and our kids safe.”

The tweet came shortly after the mayor and his wife, Chirlane McCray, participated in an online campaign to prevent bullying and hate against Asian American and Pacific Islanders.

In response, some people on Twitter took to posting photos of Adolf Hitler and suggesting that the mayor was following in the Nazi leader’s footsteps.

Others tried a more tactful approach.

“We (the Jewish people) can’t stress how dangerous it is every time you single us out as though we are the only ones gathering in all of NYC. Way to keep us & our kids safe … ,” said one poster.

This is the mayor’s latest Twitter dust-up with the Jewish community. De Blasio came under criticism on April 28 for calling out the “Jewish community” as a whole for not social distancing when a large group of Chassidic men broke such rules at a rabbi’s funeral in the Williamsburg neighborhood of Brooklyn.

In that case, numerous Jewish groups vehemently objected to the mayor’s choice of words. That organized communal response has been largely absent this time around.

The latest tweet specified the incident and not the entire Jewish community. Still, prior tweets on social distancing by the mayor have not pointed out any other group or ethnicity.

A release published on Tuesday evening by the Agudath Israel of America didn’t address the mayor’s tweet directly. Instead, it framed the issue as part of a larger concern about reopening religious institutions.

“Yesterday, a Jewish school in Brooklyn, N.Y., was found hosting students learning in apparent violation of Gov. [Andrew] Cuomo’s Executive Order. While Agudath Israel of America neither runs nor controls any yeshivos, if any yeshiva violated the Executive Order there are no excuses for such behavior. Period.”

“That said, this incident speaks to a larger issue,” the release went on to say. “Courts in North Carolina, Kentucky and Kansas have struck down executive orders that shuttered churches on the grounds that such orders unlawfully prohibited the free exercise of religion. Yeshivos in our community serve both education and religious functions. … Orthodox families tend to be larger, and many live in small, urban apartments. The mental-health toll of this pandemic on children and parents alike has been crushing.”