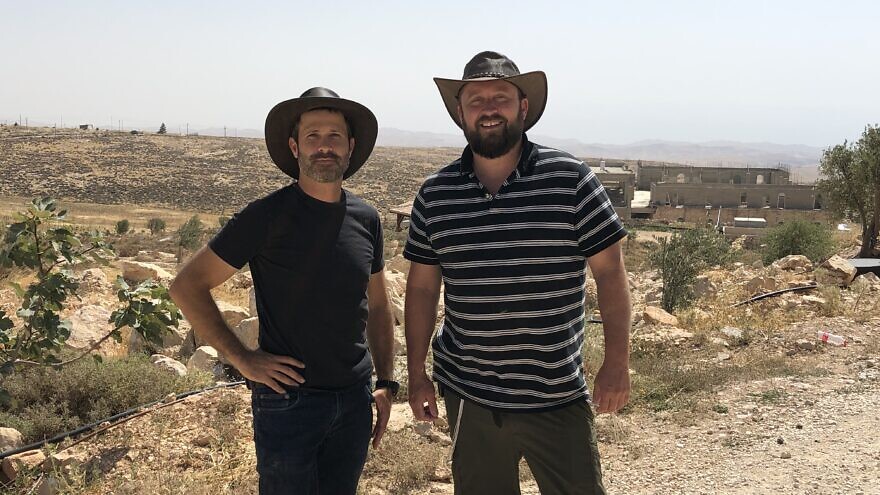 (June 19, 2020 / JNS) Atop a nearly barren mountain ridge at the tip of southeastern Gush Etzion, with breathtaking views overlooking the Judean Desert and the Dead Sea, two American immigrants are building an oasis—a working organic farm and spiritual retreat center—with the hope of turning the site into a global tourist destination.

Meet Ari Abramowitz and Jeremy Gimpel. Both are rabbis, former Israeli Defense Forces’ soldiers, best friends and business partners, who combined their life savings and moved with their families to a hilltop just outside the community of Ibei HaNahal in order to build what is known as Arugot Farms.

For the past two decades, the pair teamed up utilizing various platforms, including radio and television, and going on speaking tours in Israel and abroad, sharing their love of the Land of Israel.

While the farm is still under construction with a grand opening slated for the summer of 2021, busloads of visitors (thousands of tourists from Israel and abroad have already visited) to see the land blossoming before their eyes.

However, there is catch. Sitting down with JNS at the farm, the pair says that their property is actually located within “Enclave #8,” on the conceptual map shared by the United States administration this past January as part of U.S. President Donald Trump’s “Peace to Prosperity” plan.

Based on the plan, 15 isolated Israeli enclaves and their communities would be allowed to remain where they are, but would be encircled within areas controlled by the Palestinian Authority. 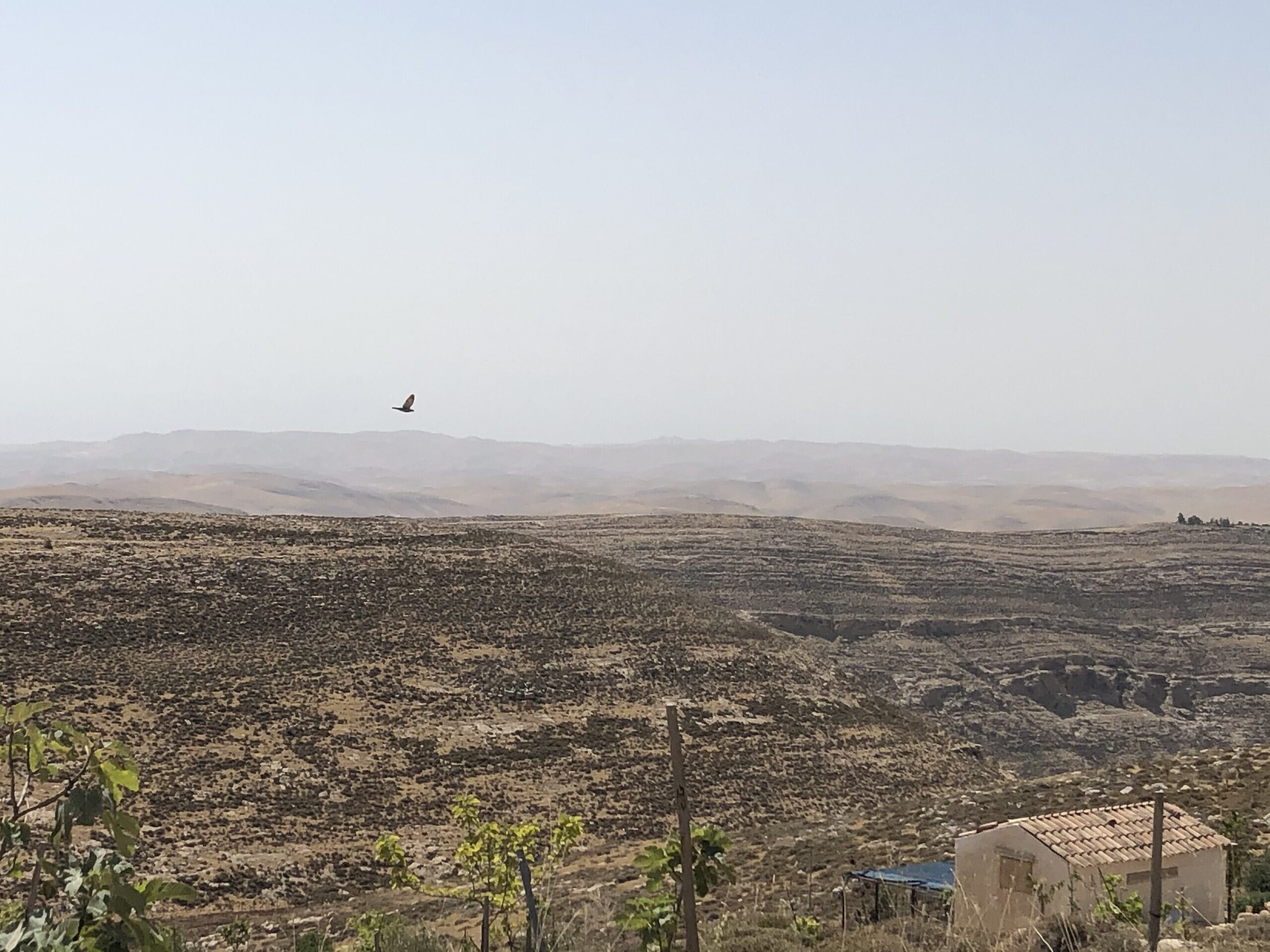 Skeptics of the plan fear that residents might eventually abandon their homes and properties should the roads leading to their communities become too dangerous, or if the plan doesn’t allow for natural building growth.

Abramowitz expresses concern that the plan would be a disaster for Israel and for the farm. “President Trump has made a number of bold and courageous decisions which were good both for the United States and for Israel. However, despite his best intentions here, this plan would be a disaster or Israel. For us personally, we would be choked out. We may have to go through Palestinian police checkpoints just to get here.”

Gimpel gazes eastward, adding that “it’s perplexing that this could be part of an enclave. All of this, as far as the eye can see, is the Judean wilderness. How could this become a State of Palestine?”

He can’t image a scenario in which all of their hard work will be for naught, saying that “when we got here, it was a barren mountain at the edge of the desert. There was no infrastructure, no water or electricity—and not one tree was here. And now, there are over 3,000 fruit trees, olive groves, vineyards. I just don’t understand the parameters of the plan.”

He further expresses his attachment to the area. “The reason why Jews are called ‘Jews’ is because we are from Judea. This land doesn’t belong to us; rather, we belong to this land.”

Ari Abramowitz pointing to Nahal Arugot on a detailed map of Israel. The area is designated as “enclave #8” in the Trump Administration’s Peace to Prosperity vision.

Abramowitz explains that tens of Arabs actually work on the farm. “If you ask them privately, there is no question they would admit that they would rather live under Israeli sovereignty than the Palestinian Authority,” he says.

One of the basic reasons the Trump Mideast peace plan is flawed, he continues, is because “it is coming from a paradigm of annexation. You don’t annex what is yours. It’s called declaring sovereignty.”

Similar to statements made in recent weeks by leaders of the Yesha Council, the umbrella organization that represents communities in Judea and Samaria, Abramowitz says “if we’re talking about exchanging 70 percent [of the land] for a certificate of recognition of 30 percent, I’ll pass. The alternative is maintaining the status quo. This is what I prefer.”

While they are certainly concerned, Abramowitz assures that he and Gimpel are not losing their faith. “Just coming out here has required so many leaps of faith,” he says, “and despite this seemingly existential threat, we are not losing our faith now.”

“There have been so many plans over the years, with political winds always shifting. The U.S. is going through its own turmoil and confusion right now. To get emotionally wrapped up in threats of mere mortals would seem silly at this point in Jewish history, as Hashem has proven that he is with us, and the source of our strength and blessing,” he says.

It’s not the first time that the project came under potential threat. In 2018, three radical left-wing organizations funded by the European Union filed a petition with Israel’s Supreme Court claiming that the land the farm was being built on was private Palestinian property.

Gimpel says the courts sided with Arugot Farms, ruling that the area was, in fact, Israeli state land zoned for agriculture and tourism. He says that for the past 30 years, nobody had put a cent into the area. 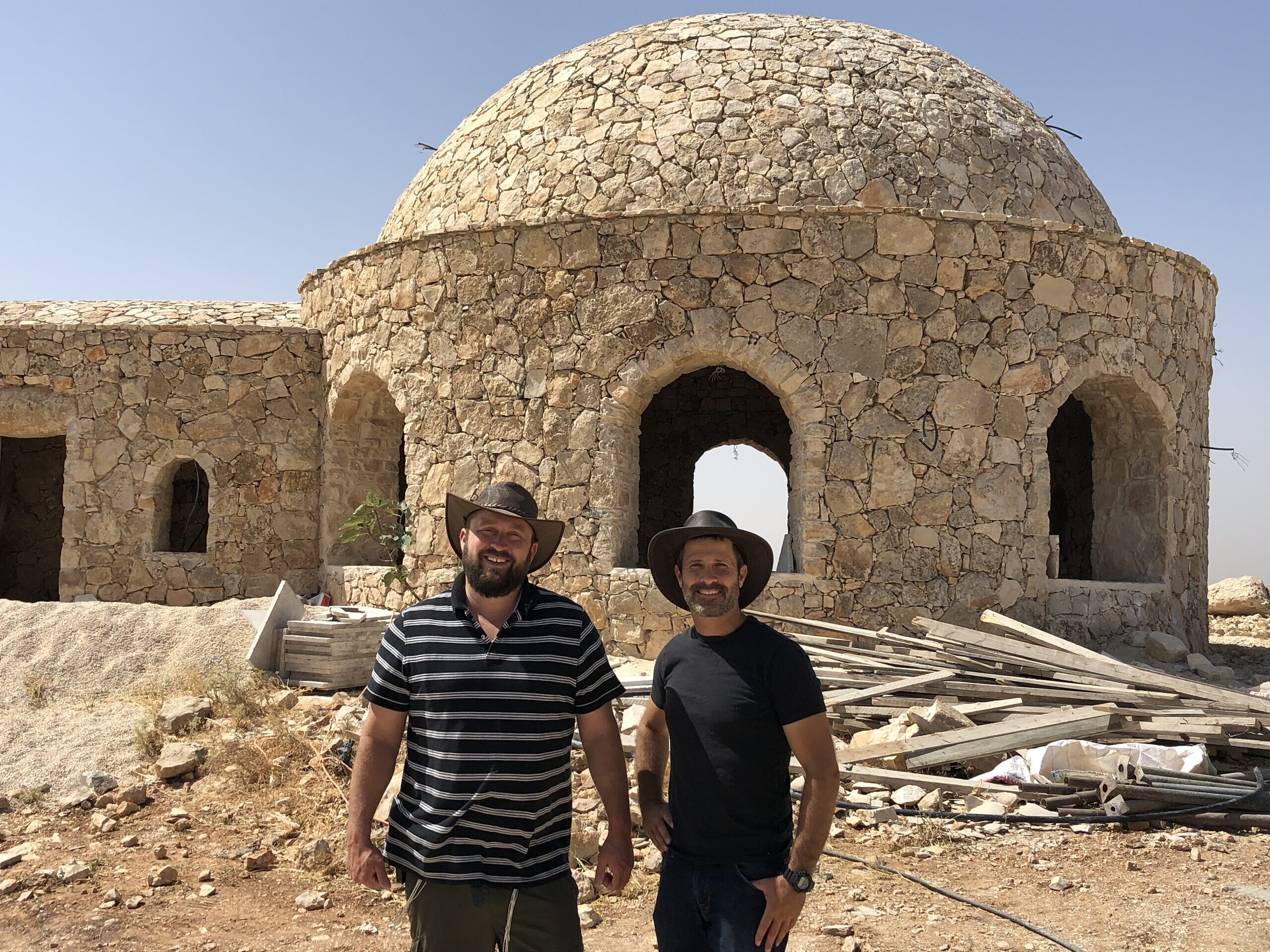 Ari Abramowitz (left) and Jeremy Gimpel in front of their house of worship on Arugot Farms. Credit: Josh Hasten.

Despite the headaches and potential challenges that might arise, construction continues on the farm with the building of a house of worship, 14 studio apartments, and more. The hope is that once the work is complete, spiritual seminars and retreats will be held for groups near and far.

“The goal,” says Abramowitz, “is to create a holistic connection to the G-d of Israel, the Land of Israel and the People of Israel.”

Gimpel adds, “This place is filled with Jewish history. This is where David hid from Saul before he became king. The midrash [biblical commentaries] say that most of David’s Psalms were written here. Psalms are the foundation for Jewish prayer and song, and our goal is to create a spiritual retreat center for people to experience music, prayer, art and meditation.”