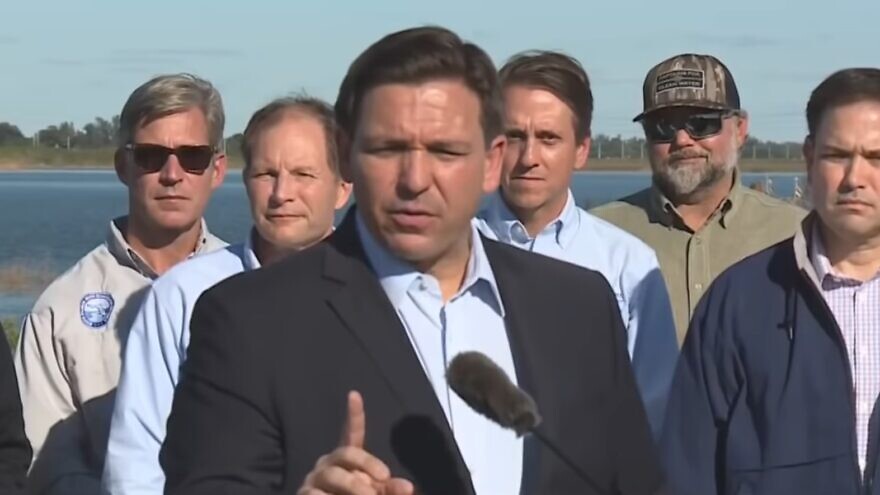 (February 1, 2022 / JNS) Jewish groups and some politicians are decrying neo-Nazi activity that took place in Orlando, Fla., over the weekend, even as Florida Gov. Ron DeSantis alleges his political enemies are trying to use the incident to “smear” him.

On Saturday, some two dozen neo-Nazis from two hate groups, Goyim Defense League and National Socialist Movement, rallied in Orlando, calling Jews “the devil” and saying, “Jews rape children and drink their blood,” according to the watchdog group StopAntisemitism.com.

They also hung flags with swastikas and banners, including “Vax the Jews,” on a highway overpass while shouting “Heil Hitler” at passing cars.

In a post on social media, the Jewish Democratic Council of America retweeted video of the neo-Nazis saying that “the Nazis in Orlando were emboldened by the GOPs embrace of dangerous extremism. [Former President Donald] Trump refused to condemn white supremacy. We’re saddened, but not shocked to find white supremacists in our streets. We will not tolerate this hatred, and we will not live in fear.”

Note the Israeli flag on the ground being stepped on. pic.twitter.com/cZrt4FVS9e

At a press conference on Monday, the governor addressed the anti-Semitic incidents in Orlando, calling the neo-Nazis “some jack***ses” and vowing that the state police would hold them accountable because they “were doing stuff on the overpass.”

He also said his critics were coming from the other side of the political spectrum.

“These people, these Democrats who are trying to use this as some type of political issue to try to smear me as if I had something to do with this, we are not going to play their game,” DeSantis said during a press conference on Monday afternoon. “ … I’m not going to have people try to smear me that belong to a political party that has elevated anti-Semites to the halls of Congress like [Rep.] Ilhan Omar [D-Minn.] that have played footsie with the BDS movement that even have people in their party that have cavorted with [Nation of Islam leader Louis] Farrakhan.”

DeSantis went on to tout his bona fides, noting that under his administration, Florida has “signed the strongest anti-Semitism bill in the country” and “stared down companies who have indulged BDS, like Airbnb, and we won … .”

The governor’s remarks came less than 24 hours after his spokesperson, Christina Pushaw, appeared to be questioning the legitimacy of the videos.

“Do we even know they’re Nazis?” she tweeted. “Or is this a stunt like the ‘white nationalists’ who crashed the [Glenn] Youngkin rally in Charlottesville [Va.] and turned out to be Dem staffers? I trust Florida law enforcement to investigate and am awaiting their conclusions.”

Pushaw’s comments referenced an event in late October where a group called the Lincoln Project sent five people posing as white supremacists to a rally for the then-gubernatorial candidate.

Saturday’s incidents occurred just two days after the International Holocaust Remembrance Day and during a time when a large number of Orthodox Jewish families from the New York and New Jersey region were in Orlando for winter vacation.

They also came just days after anti-Semitic fliers from the Goyim Defense League blaming the pandemic on Jewish conspiracy were found throughout Miami.

‘Any reports of criminal activity will be thoroughly investigated’

Liora Rez, executive director of StopAntisemitism.com, told JNS: “We are horrified this aggravated harassment campaign was allowed to take place in Orlando. Anti-Semitism is spreading like wildfire, and atrocious stunts like these do nothing but pour gasoline onto the flames. Shame on the Orlando Police Department and elected officials for not putting a stop to this vile bigotry.”

Mayor Gabriel Groisman of Bal Harbour, Fla., outside of Miami, said on social media: “The Jewish community in our country must get serious about our self-defense, real quick.”

In one widely circulated video from Saturday, a neo-Nazi is seen addressing a passing motorist, telling him “6 million viewers,” while another said, “He’s a Jew look at him. Guess where you’re going back to.” A Twitter user who identified himself as Luke Denton claimed he took the video, tweeting out, “I really can’t believe we’re seeing Nazis in 2022. FYI: I am of Jewish descent, and a large portion of my family was killed in the Holocaust.”

Some authorities reportedly said that the neo-Nazi gatherings were allowed under the banner of free speech.

Orlando Mayor Buddy Dyer took to social media to express his disgust with the protesters, saying “anti-Semitism and hatred are not welcome in this community. Despite displays of hate in Central Florida this weekend, our collective commitment to building an inclusive, compassionate community for all is stronger than ever.”

The protesters, however, may have crossed the line as a video clip appeared to show several of them punching a passerby in a dark-colored car.

“While their vile, hateful rhetoric may be protected speech, the recorded assault on a citizen is not,” said the Anti-Defamation League of Florida. “We hope law enforcement is investigating this assault and will charge the individuals responsible for it.”

Politicians on both sides of the political divide urged action against Jew-hatred.

“I am calling on every member of the Florida House and Senate, as well as Gov. Ron DeSantis and [Sen.] Marco Rubio to publicly denounce the despicable display of anti-Semitism in Orlando this weekend,” Michael Grieco, a Democratic member of the Florida House of Representatives, wrote on Twitter. “We’re getting crickets or deleted tweets from most.”

U.S. Rep. Stephanie Murray, a Democrat whose district includes Orange County, posted online that “the neo-Nazi rallies in Orlando were a disgrace. Central Florida is home to patriots of every political stripe—and we have no tolerance for these anti-Semitic and racist groups.”

Her Washington colleague, Republican Sen. Rick Scott, also addressed the issue on social media, tweeting: “The hateful and anti-Semitic demonstrations reported in Florida have no place in our state. Across America, we’ve seen a heartbreaking and disgusting rise in hate like this. We must always condemn it and continue to stand strong with our Jewish communities.”