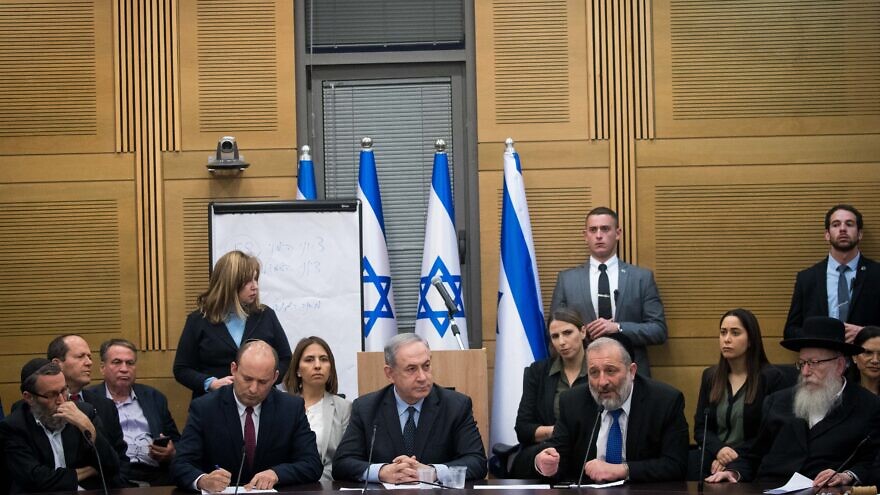 Israeli Prime Minister Benjamin Netanyahu meets with the heads of the right-wing parties on March 4, 2020, two days after the third round of elections in Israel. Photo by Yonatan Sindel/Flash90.
Republish this article
855 WORDS
Spread the word.
Help JNS grow!
Share now:

(March 5, 2020 / JNS) Israel’s fractured political system is possibly entering uncharted territory in the next few weeks. The results of Monday’s third round of general elections indicate a continued political deadlock; Israeli Prime Minister Benjamin Netanyahu is scheduled to stand trial on corruption charges, including bribery, breach of trust and fraud on March 17; and legislative efforts by Netanyahu’s opponents and others in the Knesset are underway to bar the Israeli leader from forming a government while under indictment.

Ofer Shelach of the Blue and White Party headed by Benny Gantz, one of the Knesset members leading the charge to write and get this legislation passed, told JNS that he strongly supports the move.

“This is a proper law,” said Shelach. “A person under indictment cannot serve as a minister, so there is no reason why he should be allowed to be prime minister. There is no reason for us to have to experience the shame two weeks from now of a current prime minister going to court and hearing three charges against him, including bribery. We have a majority, and we will pass this law.”

Of course, not everyone feels that way.

“I believe that this is a personal law [made] just for Netanyahu; therefore, it is not only unworthy, but it is illegal,” Professor Yedidah Stern, vice president of research at the Israel Democracy Institute, told JNS.

“I am sad to say that even the Israeli center—represented by the Blue and White Party—and its left-wing Labor and Meretz parties are adopting destructive norms that do not respect the rules of the game with regards to the law. This is a corruption when every available majority tries to change the rules in order to gain an advantage,” he said.

Those in the “anti-Netanyahu” camp have begun the process of trying to pass legislation that would ban a Knesset member who has been indicted from being tasked with forming a government and becoming prime minister.

This would invalidate Netanyahu from trying to form a majority coalition and continuing as prime minister since he has been indicted on three charges. It is not a simple process to pass a law of this magnitude without a government in place; however, if there is a majority for this move, those hurdles can be overcome.

Netanyahu publicly denounced the idea declaring that the law “going against the foundations of democracy,” saying the citizens of Israel “gave me more votes for prime minister than any other candidate.”

‘No one will form a government’

Blue and White, Labor-Meretz and the Joint Arab List have 55 mandates, and now that Avigdor Lieberman and his Yisrael Beiteinu Party have announced that they will support the law, there is a majority of 62 Knesset members supporting the law and Netanyahu’s 58-seat bloc voting against it.

But Likud Knesset member and past coalition chairman Miki Zohar told JNS that the end result of passing the law will be a fourth election, which will hurt the center-left. 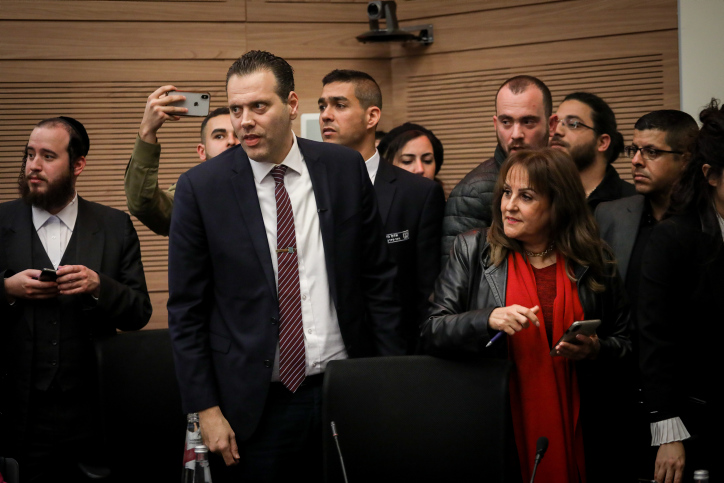 Likud Party Knesset member Miki Zohar reacts during an arrangements committee meeting at the Knesset in Jerusalem on Jan. 13, 2020. Photo by Hadas Parush/Flash90.

“We won’t agree that someone other than Netanyahu will lead us, and the other side won’t accept this,” Zohar told JNS. “No one will form a government. In the next election, we will rise to 65-67 seats in our bloc because the public will punish the center-left for trying to pass this law.

Zohar said “it is a shame that they are trying to do something anti-democratic, but they will pay for it. And then we will have a strong right-wing government with Netanyahu as prime minister.”

Likud Party MK Keti Sheetrit told JNS that “when we in the Likud said that Gantz is working in partnership with the Joint Arab List, many raised their eyebrows and said it was mere political spin. Now we have proof that they are partners as they work together on this law. Gantz lost the election, and now he is trying to steal the election with this anti-democratic law to try to undo the will of the people who chose Netanyahu as prime minister.”

On the other side of the aisle, MK Itzik Shmuli of the Labor Party rejected these claims by Likud. He told JNS, “I won’t accept any lectures about this law being anti-democratic from those who have been saying for years that the majority rules, and we can do whatever we want since we have a majority. We don’t have to apologize for not fighting with our gloves on and with the etiquette which the other side desires.”

The big question mark remains as to whether Lieberman’s Party will join forces with the Arab parties to pass the law. Joint List MK Ahmed Tibi rightly stated that parties that disagree with each other also work together all the time.

“The law which I sponsored to provide free dental care for children with severe disabilities was supported by the Likud,” he pointed out. “There are many reasonable laws for which there is no coalition and no opposition.”

Blue and White plans to begin the process of bringing the law to the Knesset floor for a vote soon after the 23rd Knesset is sworn in on March 16.