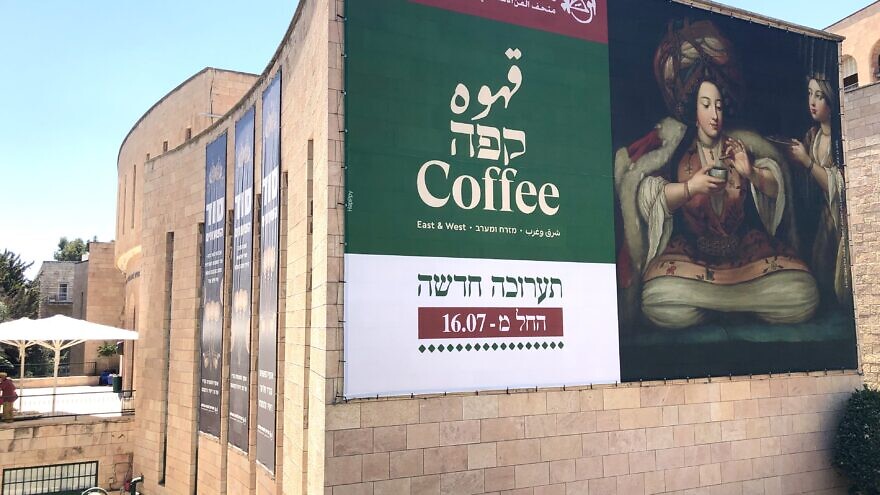 In a new temporary exhibit, “Coffee: East and West,” the Museum for Islamic Art in Jerusalem pulls all those strands together to tell a compelling story of economic, social, religious and cultural significance, July 2021. Photo by Judy Lash Balint.
Republish this article
820 WORDS
Spread the word.
Help JNS grow!
Share now:

(July 23, 2021 / JNS) Coffee culture in Israel is as varied as the population. Bedouin hospitality dictates finely ground dark coffee served in tiny cups; Arabs will serve strong Turkish coffee often spiked with a dash of cardamom and brewed in a raliya, or finjan as it’s known in Israel; Israelis with a European or American background favor espresso drinks; and many Jews with Ethiopian roots still revere and practice the traditional Buna coffee ceremony.

In a new temporary exhibit, “Coffee: East and West” that just opened, the Museum for Islamic Art in Jerusalem pulls all those strands together to tell a compelling story of economic, social, religious and cultural significance.

The exhibit, spread over three of the museum’s halls, includes items from more than 30 countries that illustrate how the rich and the poor prepared and served coffee over the ages. Many items are on loan from Turkish collections since the Ottoman Empire was at the center of the economic and cultural coffee enterprise.

Tiny, delicate, ornately decorated cups without handles that were used for Turkish coffee are on display next to larger china cups used by the French elite. One features a mustache-shaped bar in the cup opening designed to protect the facial hair of the coffee drinker.

In a preview visit, a senior guide told visitors that until the 16th century, tea was the traditional beverage of the Middle East, introduced by those who plied the Silk Road trade route. Coffee originally developed in Ethiopia and spread to Yemen. With the spread of the Ottoman Empire over large swaths of the Arabian Peninsula, coffee and coffeehouses became popular in places where alcohol was prohibited, despite the unsuccessful efforts of Muslim religious authorities to outlaw the gatherings they felt were taking people away from the mosques. 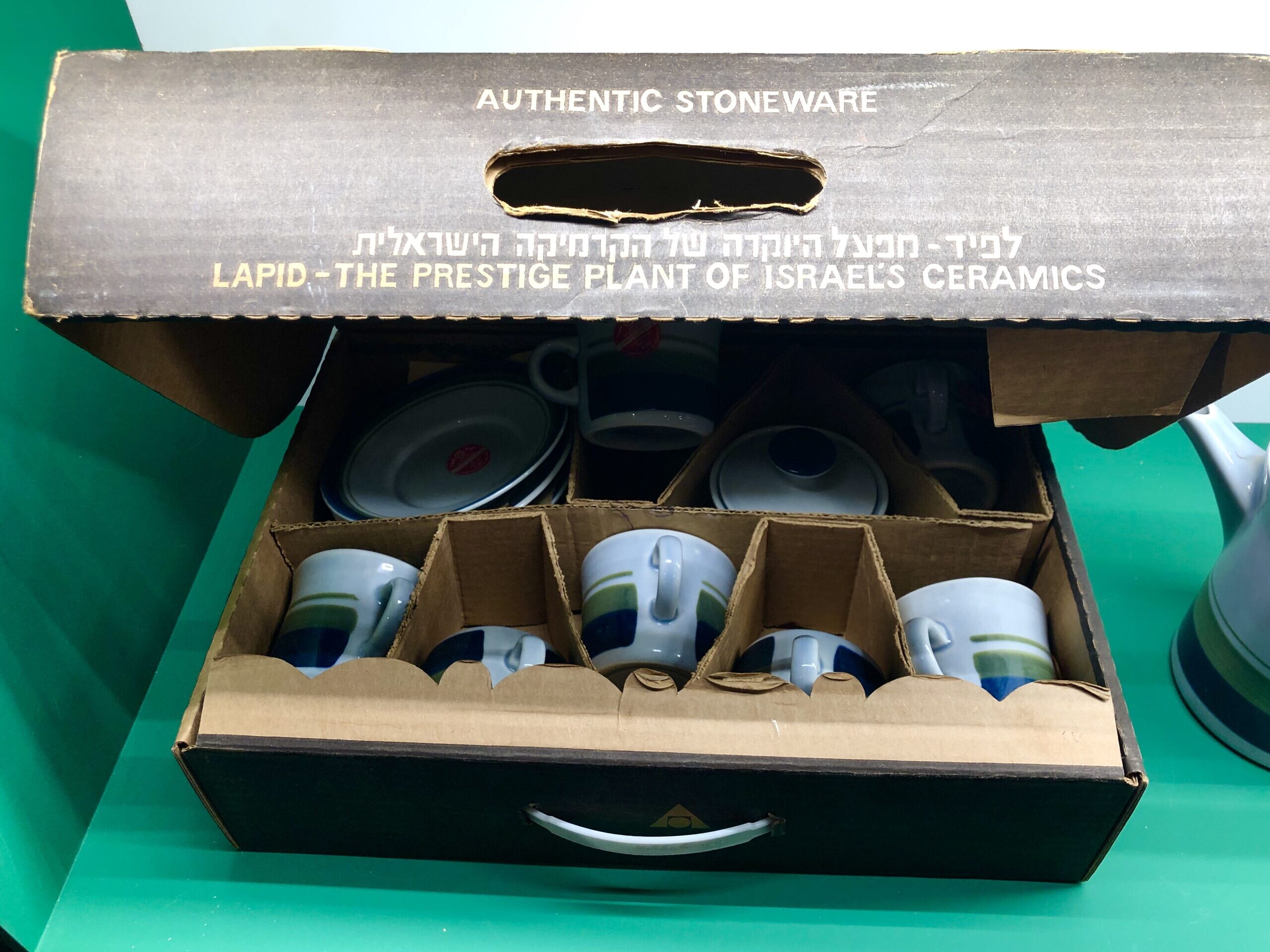 Several ceramics factories were founded during this period that produced a distinctive “Eretz Israel” style of coffee pots and cups. Many of these are on display and form the premiere of the “Israeliana” collection at the museum. Photo by Judy Lash Balint.

Jews have also engaged in religious disputations over where and how coffee should be served. One section of the exhibit displays a Hebrew text that deals with various opinions on whether coffee could be consumed on Shabbat and whether Jews could visit a coffee house owned by Christians. The arguments spanned continents but, according to the museum guide, actually led to cooperation between rabbis from the West and their peers from the East, who had encountered coffee at an earlier stage.

The exhibit also illustrates how coffee was sometimes used as a means of separation between women and men, but also as a means of creating female solidarity and empowerment. The illustration used as the banner for the exhibit is a portrayal of a French woman drinking coffee dressed in traditional male Turkish dress. 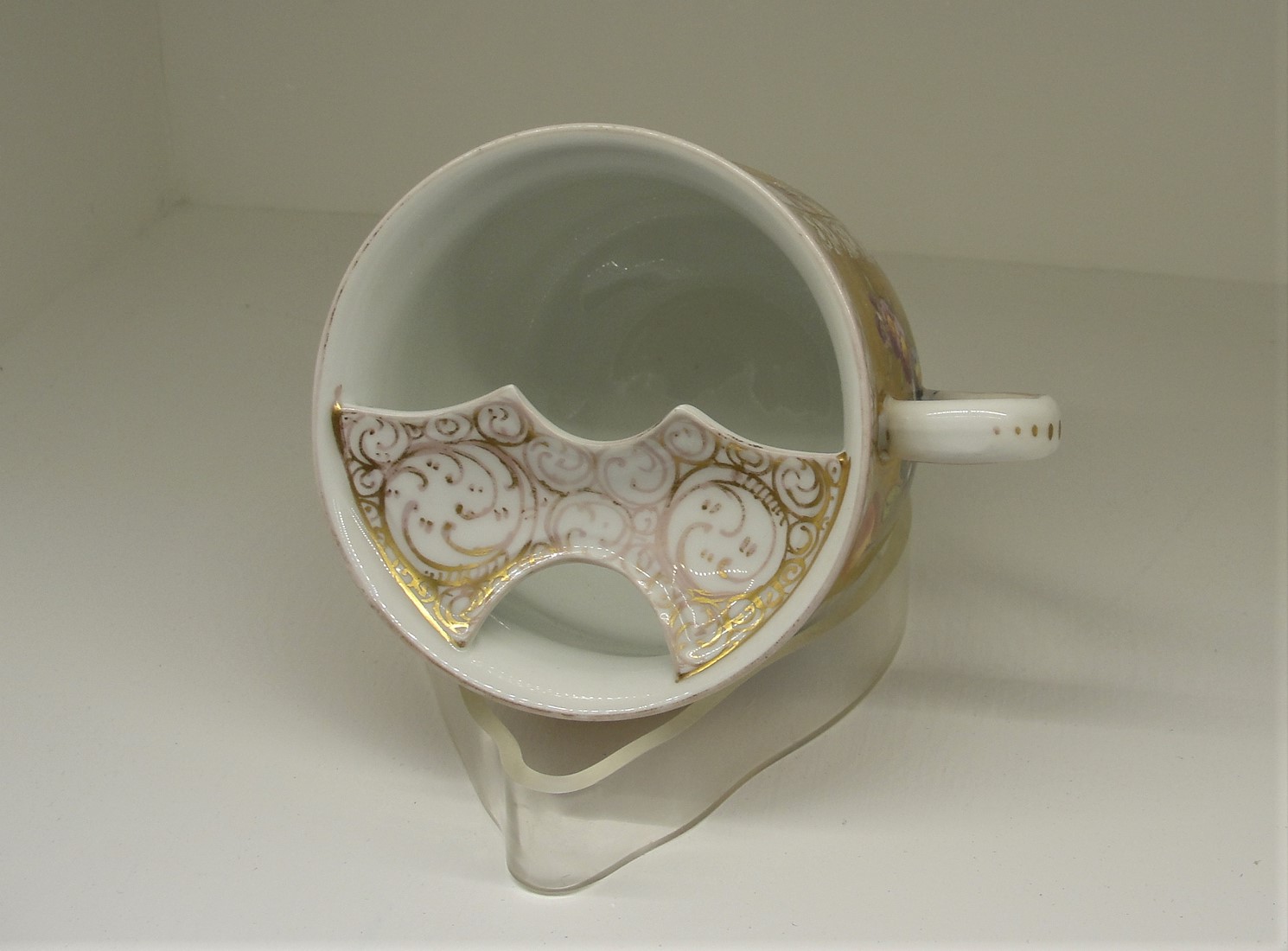 An ornate cup features a mustache-shaped bar in the cup opening designed to protect the facial hair of the coffee drinker. Photo by Judy Lash Balint.

The mingling of men and women in coffeehouses was frowned upon in most places in the world during the 16th and 17th centuries, so some women who desperately wanted to be part of the coffee culture, dressed in men’s clothing. A petition from women in 17th-century London who protested their exclusion from coffee houses hangs in another part of the exhibit. Generally, women of 17th- and 18th-century Europe gathered to drink coffee together at home—the origin of the kaffeeklatsch.

The antithesis of instant coffee

Fast-forward a few centuries to pre-state Palestine of the 1930s under the British Mandate. European Jews who fled their turbulent continent when Hitler came to power brought a sophisticated cafe culture with them.

Several ceramics factories were founded during this period that produced a distinctive “Eretz Israel” style of coffee pots and cups. Many of these are on display and form the premiere of the “Israeliana” collection at the Museum. Among the items are founding father and first Israel Prime Minister David Ben-Gurion’s coffee cup, the “President” coffee set created for the President’s House and Israeli embassies abroad during the term of office of the longest-serving Israeli President Yitzhak Ben-Zvi. 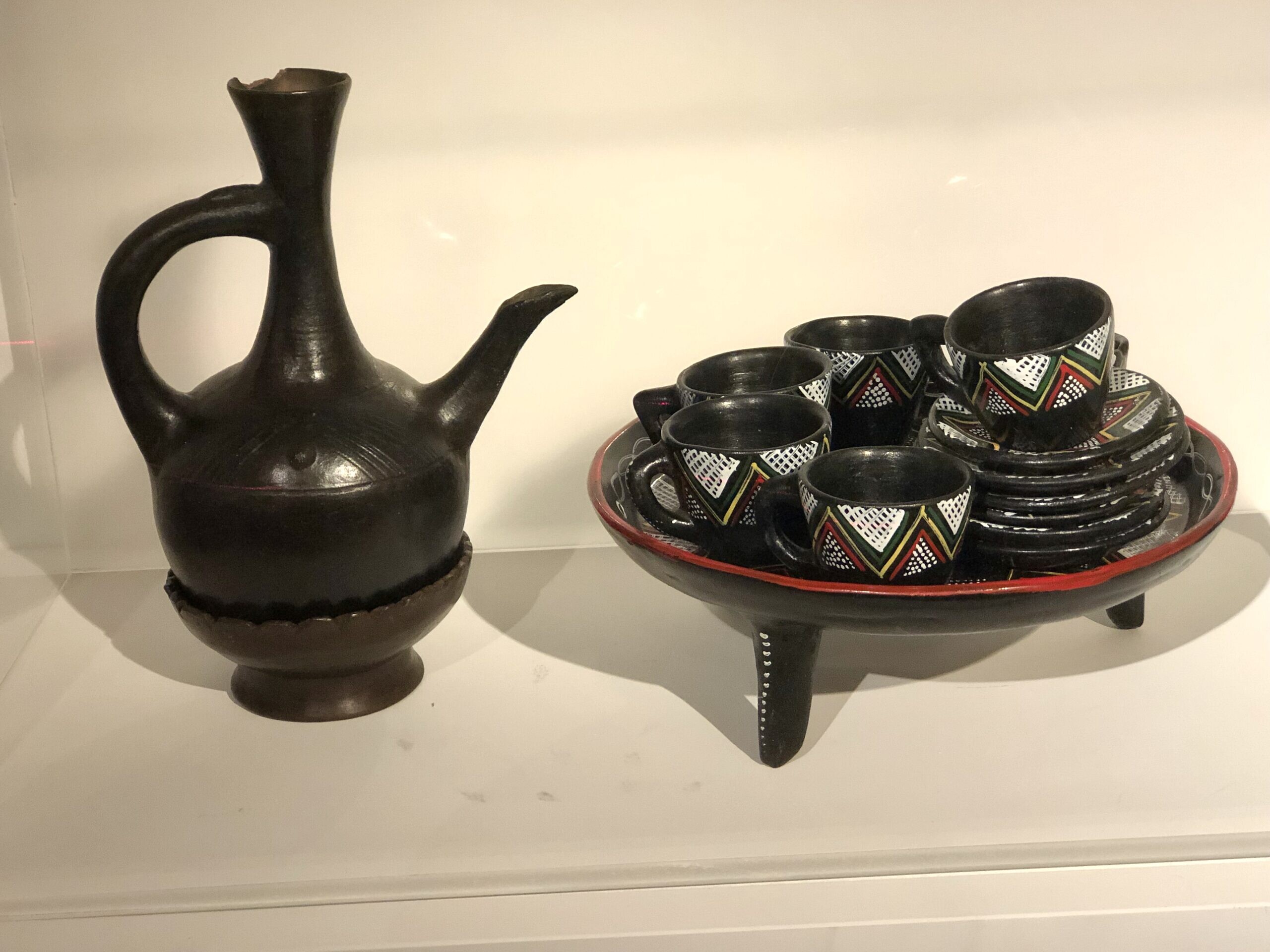 The exhibit, spread over three of the museum’s halls, includes items from more than 30 countries that illustrate how the rich and the poor prepared and served coffee over the ages. Photo by Judy Lash Balint.

Also on view is an impressive array of vintage Italian espresso machines that used to grace the best Israeli cafes. One is a model of the world’s first espresso machine manufactured in 1884.

Simpler coffee-making gear in use by Bedouin today, as well as the utensils used in the Ethiopian Buna coffee ceremony, make a significant appearance at the exhibit. Jews of Ethiopian origin brought the tradition with them to Israel, with the home preparation for the ceremony, roasting and grinding the beans, three stages of preparing the builder, blessings and more are the antithesis of the instant coffee that some Israelis still enjoy.

While there’s little inherently Jewish about the ritual, those curious to gain insight into Ethiopian culture can take part in a Buna ceremony and enjoy a performance of Ethiopian music and traditional Ethiopian refreshments on several evenings during August at the museum.

Coffee East and West at the Museum for Islamic Art, 2 HaPalmach St., Jerusalem