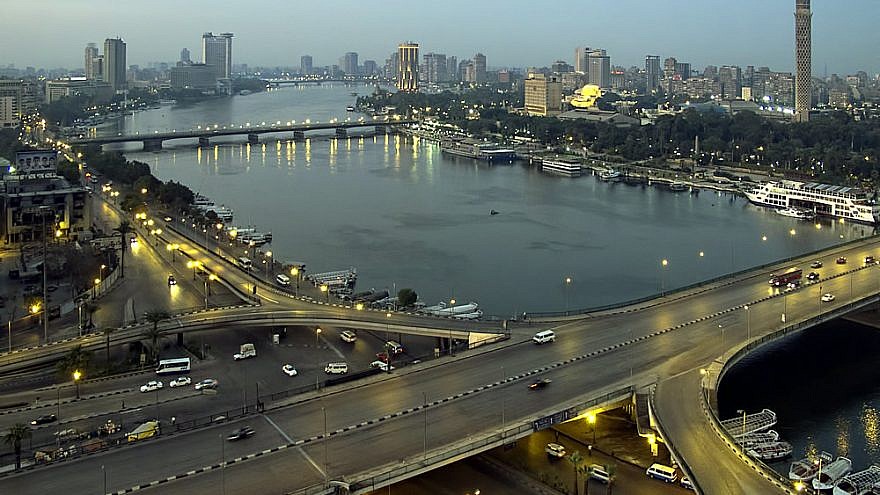 A view of the Nile River in Cairo in 2011, Credit: Dan Lundberg via Wikimedia Commons.
Spread the word.
Help JNS grow!
Share now:

Ezzat was taken into custody on Friday in a raid on an apartment in Cairo’s Fifth Settlement district, the Egyptian Interior Ministry said, according to Reuters. Ezzat, who allegedly supervised several assassinations or attempted assassinations, as well as a bombing in 2013, is accused of heading a terrorist group, according to the report.

Ezzat has already been sentenced in absentia to death and to life in prison, but under Egyptian law will undergo new trials in those cases now that he has been arrested, the report said.

Ezzat became acting leader of the Muslim Brotherhood after the arrest of Mohamed Badie in 2013. The Egyptian government has been cracking down on the Muslim Brotherhood since it was toppled from power by a military-led coup in 2013, led by then-army chief Abdel Fattah el-Sisi, who is now leading the country.

The Muslim Brotherhood released a statement, according to the report, calling the arrest being based on “false political charges.”

Separately, Greece reached agreement on maritime boundaries with Egypt on Thursday after Turkey expanded its research operations in the eastern Mediterranean, reported Reuters.

Turkish President Tayyip Erdoğan said last week that Turkey would not back down regarding its claims to energy exploration rights in the eastern Mediterranean Sea. France joined the military exercises last Wednesday in the eastern Mediterranean, along with Italy, Greece, and Cyprus, amid the growing tensions with Turkey, which they see as infringing upon Greece’s territorial waters.