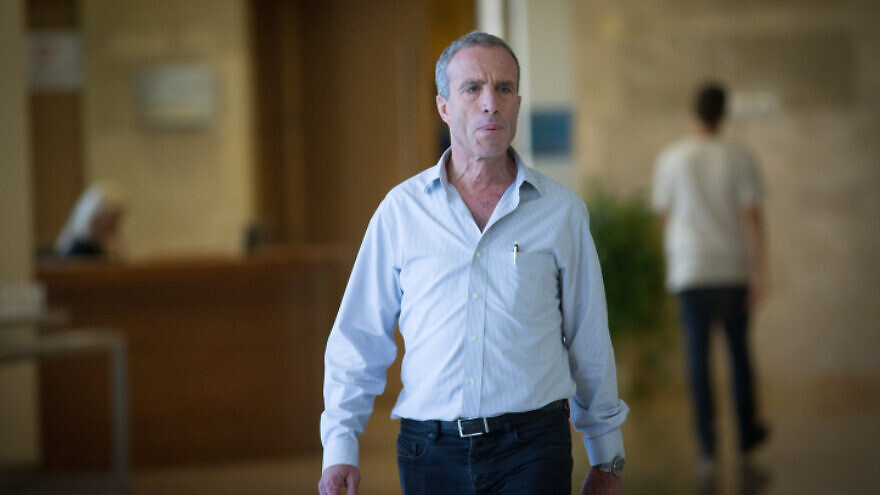 (September 3, 2021 / JNS) “Israel is your home away from home,” Israeli President Isaac Herzog said in a message on Sept. 2, ahead of the Jewish New Year. His address was aimed at “the people of Israel and the Jewish people at large,” which he referred to as his “extended family.” Herzog was previously head of the Jewish Agency for Israel, where, as one of his stated objectives, he worked to provide a platform for all Jewish communities around the world.

Today, the Jewish Agency’s top position has yet to be filled, and the successful candidate will need to bridge the broad and ever-growing divide that exists between Israeli and Diaspora Jewry. The challenge will likely lie in the ability to focus on the few shared common denominators and not on the myriad differences.

Elazar Stern, currently Israel’s Minister of Intelligence, is the frontrunner for the prestigious position. His main challenger, Dani Dayan, Israel’s former consul general in New York, has recently been appointed director of Israel’s Yad Vashem World Holocaust Remembrance Center. Former Ambassador to the United Nations Danny Danon is also a candidate for the position, though Stern has the backing of Prime Minister Naftali Bennett, Foreign Minister Yair Lapid and is the government’s preferred choice. This is significant because the selection committee has rarely rejected the prime minister’s choice.

The final decision, however, will be made in October by a 10-member committee comprised of representatives of the World Zionist Organization, the Jewish Federations of North America and Keren Hayesod-United Jewish Appeal. Stern will need the support of at least nine members of the committee to be chosen for the role.

Given his more centrist political and religious leanings, Stern could be a palatable fit from the perspective of more liberal and progressive Jewish community members. The more centrist Orthodox stream of Jews could also likely see in him a person who could represent them on the world stage.

If elected to the position, Stern will need to guide the Jewish Agency in an era that is witnessing a trend among young Jews who have been swept up in the strong wave of progressivism, the rejection of historical realities and an emotional connection with perceived “underdogs” around the world, including the Palestinians. Many of the followers of this worldview are Jewish, and many of them are assimilated or in the midst of doing so. At the same time, there are many Jews in the Diaspora who feel they have a strong connection to Judaism, yet are becoming more disenfranchised with the Jewish state.

“I want every Jew in the world to be able to say, ‘I am proud to be a Jew,’ ” he told JNS in a sit-down interview at the Prime Minister’s Office in Jerusalem. “It doesn’t matter to me from which direction, or over which issue they are proud. Give people multiple options, and they can take what they feel connected to.”

He continued, saying “we need to stress and reorient towards greater Jewish solidarity, unity and peoplehood because these are the foundational pillars for a strong and vibrant Jewish people with a strong connection between the homeland and the Diaspora. I once asked Shlomo Avineri, an avowed secular professor from Hebrew University, why he fasted on Yom Kippur. He replied that he was fasting as a sign of solidarity with our people. Since then, the word solidarity has become of utmost importance to me, and I invest in cultivating it in every role I embark on. It obliges us to allow every Jew to show solidarity with the Jewish people, wherever they are, whether in Israel, the United States, Australia, Canada, Russia or elsewhere. We need to work extra hard in order to build solidarity between Jews and Jewish communities.” 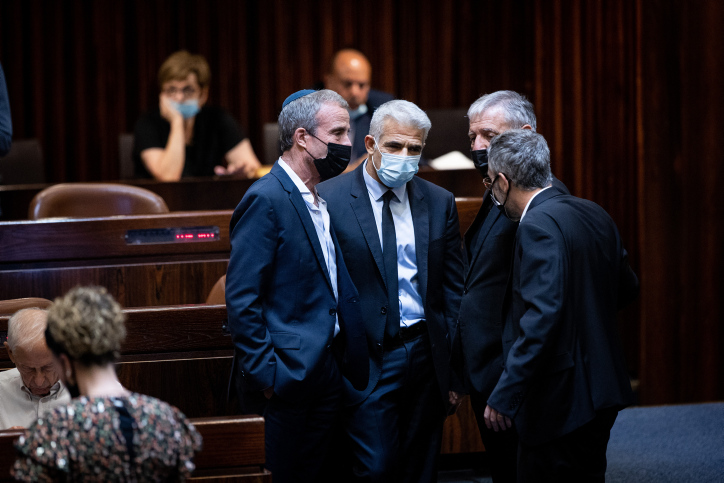 Yesh Atid parliament members Elazar Stern, Yair Lapid and Meir Cohen during a discussion on the “family reunification law,” during a plenum session in the Knesset in Jerusalem, July 6, 2021. Photo by Yonatan Sindel/Flash90.

‘I believe it is possible to make an impact’

Many Jewish groups and individuals worldwide have sided with Israel’s detractors, even adopting anti-Israel and even anti-Semitic narratives as their own.

He suggested promoting advocacy for identity, and not just aliyah, because millions of Jews have no interest in moving to Israel but would be receptive to connecting more strongly with their identity as a Jew.

Stern pointed to the thousands of Birthright Israel alumni who return home after completing a 10-day trip to Israel. In his view, these are qualified young people who could serve as activists for the cause of Jewish identity.

Stern said he also feels he has a “clear advantage” in promoting a Jewish identity because he grew up in the religious-Zionist movement, worked professionally with people from all walks of life, and his parents were Holocaust survivors.

These experiences, he emphasized, shaped him and his outlook, and provided him with the tools he needed to connect with all types of people and to succeed throughout his career.

He said he was raised with two ideological pillars. The first is that the Jewish people will never again be at risk of annihilation. “For this, we need a strong Israel,” he said. “Where did I get this idea? From Auschwitz-Birkenau.”

The second was not differentiating between people, regardless of their race, religion or skin color. “Where did I get this from? Also, Auschwitz-Birkenau.”

‘Maintain and stimulate the growth of Jewish identity’

Stern is a major general (res.) in the Israel Defense Forces, and he served as Head of the Human Resources Directorate, commander of the IDF Officers Training School and Chief Education Officer, as well as a combat soldier and commander in the Paratroopers Brigade.

He was born in 1956 in Tel Aviv, a second-generation Israeli born to Holocaust survivors. The father of five adult children, he lives with his wife, Dorit, in Hoshaya, a community village in the Galilee they helped found.

He holds a master’s degree from Kellogg Recanati–Northwestern, as well as from Tel Aviv University and the National Defense University in Washington, D.C.

In his senior positions, Stern led the IDF’s efforts to increase engagement in Jewish and democratic education. He initiated and established the “Nativ” conversion project, through which more than 12,000 people from the former Soviet Union have converted.

“Had I not grown up in a religious environment, I don’t believe I would have had the knowledge or motivation to bring the conversion program to the army,” said Stern, adding that everyone was against the idea. “The only people who supported me were then-Prime Minister Ariel Sharon and [former Sephardi Chief Rabbi of Israel] Rabbi Ovadia Yosef. They understood the issue.”

He promoted and fostered the absorption of immigrants in the IDF, in addition to the increase of haredim in the military, and ensuring their needs and integration in the army.

If he succeeds in landing the role of Jewish Agency head, Stern will be faced with the daunting task of uniting world Jewry, but he has a number of successes under his belt already that suggest he could be capable of achieving his objectives.

During his time in the IDF, Stern worked to strengthen the military’s ties with Diaspora Jewry. To that end, he set up the “Machtzavim” program for the development of Jewish and democratic educational leadership skills among senior IDF officers and members of the various security services.

He also spearheaded the project to introduce bone-marrow transplant match testing to the IDF enlistment procedure—an initiative that has reportedly saved more than 2,400 lives to date, almost two-thirds of whom are Diaspora Jews.

Stern conceived of and led the “Edim b’Madim” (“Witnesses in Uniform”) project, which sends IDF soldiers to visit the concentration camps in Poland, and he headed a special committee that reformulated the IDF Code of Ethics. He also was awarded the Charles Bronfman Prize on the founding of “Mifgashim”–Taglit Birthright, which brings together young Jews from around the world with Israeli soldiers.

Stern became a Knesset member in 2013 with the Hatnuah Party and became a member of the Yesh Atid Party in 2015. During his tenure in the Knesset, among other activities, Stern spearheaded parliamentary efforts to address issues of religion and state, and the Jewish and democratic discourse in the Knesset. He was also centrally involved in issues such as conversion, kashrut and the “The Western Wall Outline,” a compromise reached between Orthodox and non-Orthodox Jewish denominations on an area of prayer for the latter.

Stern believes that his ability to understand people from other backgrounds, including the ultra-Orthodox, due to his many and varied experiences over the years gives him an edge over other candidates. “I have served in many of my positions as a bridge between communities,” he said. “To introduce and develop initiatives which create better understanding between people from multiple backgrounds.”

But it’s not enough. According to Stern, there needs to be a constant effort to advance and promote Jewish identity among Jews around the world.

“Our challenge today is to maintain and stimulate the growth of Jewish identity,” he said, adding that “the stronger one’s identity is with his or her community, the stronger it can be with Israel.”