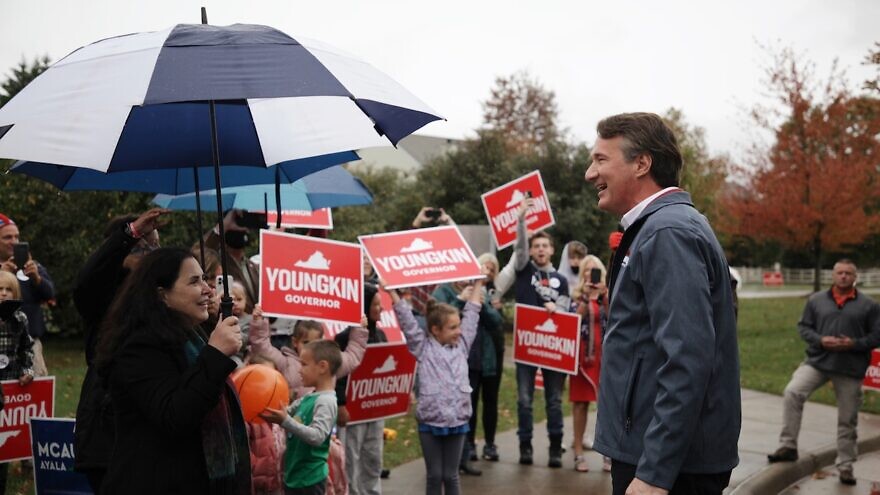 (November 3, 2021 / JNS) An exit poll conducted by the American Jewish Congress found a 10 percent decline among Jewish voters in Virginia in support of Democrats following the 2020 election.

The exit poll, which was conducted by soliciting text-message responses from a list of Jewish voters in Virginia, received more than 400 responses. According to these results, 63 percent of Jewish voters supported Democratic gubernatorial candidate Terry McAuliffe, 64; and 37 percent for Republican Glenn Youngkin, 54.

Youngkin beat former McAuliffe, who previously served as the state’s governor from 2014 to 2018, in the hotly contested election on Tuesday, which many see as a bellwether for next year’s congressional midterm elections. While McAuliffe campaigned on national issues such as abortion and voting rights, Youngkin focused on local issues including education and the economy.

Similarly, the exit poll among Virginia Jewish voters found that the top priority for both Jewish Republicans and Democrats was education (17 percent) with these same voters listing jobs and the economy as their second-highest priority (16 percent), followed by concerns about the coronavirus and health care (13 percent); climate change (12 percent); anti-Semitism and the Jan. 6 insurrection (both at 11 percent); and racial justice, and Israeli peace and security (both at 10 percent).

“The Jewish vote in Virginia mattered with more than 150,000 Jewish Virginians and a margin of just under 70,000,” said Jack Rosen, president of the American Jewish Congress. “We saw a decline in Jewish voter support for Democrats from the 2020 election by roughly 10 percent, yet still a convincing majority voted Democratic nonetheless.”

Rosen said that on core issues of importance for Jewish voters in Virginia, support for Israel and against anti-Semitism played a role; however, American Jews, like Americans as a whole, prioritized education, the economy and health care first.

“It’s worth noting that Republican voters placed greater weight on support for Israel and Democratic voters on dealing with the Jan. 6 insurrection. It’s likely that these issues will continue to dominate the Jewish political debate in the years to come,” he said.