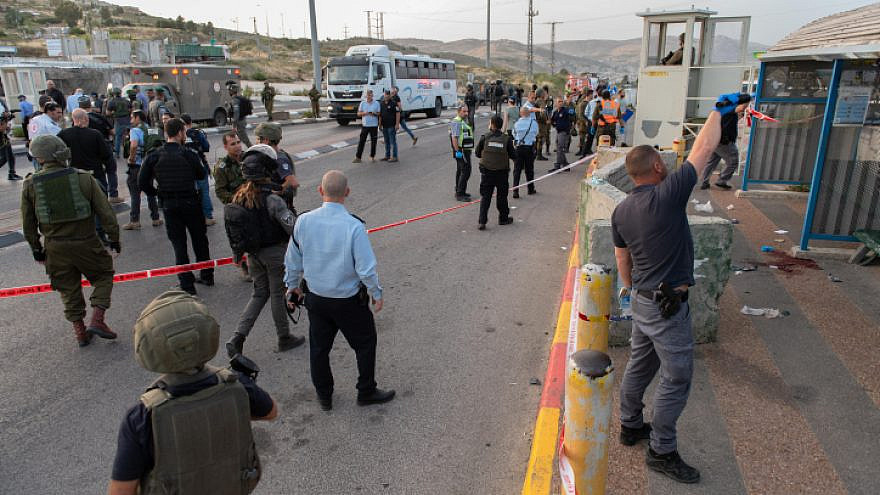 Israeli soldiers and police inspect the scene of a terrorist attack at Tapuach Junction, south of Nablus, on May 2, 2021. Photo by Sraya Diamant/Flash90.
Spread the word.
Help JNS grow!
Share now:

(May 4, 2021 / JNS) A branch of Palestinian Authority leader Mahmoud Abbas’s Fatah faction on Sunday called on Palestinians to delete security camera footage to thwart attempts by Israeli forces to apprehend those responsible for the drive-by shooting in Samaria earlier that day.

According to nonprofit Israeli research institute Palestinian Media Watch, in a post on its official Facebook page within hours of the attack, Fatah’s Nablus branch wrote: “Our lauded people, honored members of our people, we call on you to get rid of the contents that were stored in the [security] cameras of your homes or your businesses today, and not to transfer any media content among yourselves that the occupation [i.e., Israel] is spreading.”

They added: “We salute you and your struggle” before signing off: “The Fatah Movement, Nablus branch.”

Three 19-year-old students—Yehuda Guetta, Benaya Peretz and Amichai Hala—were wounded in the attack, a drive-by shooting that occurred while they waiting at a bus stop at the Tapuach Junction near Ariel in Samaria on Sunday. Two of the teens were critically injured while the third was moderately hurt.

The Israeli Defense Forces are currently tracking down the terrorist responsible for the attack.

On the same day, Fatah’s Nablus branch further posted to Facebook a message in support of terror: “The Fatah Movement’s Nablus branch emphasized that resistance is a natural right of the Palestinian people against the Zionist arrogance and the attacks against our people wherever they are, and particularly in Jerusalem.”

“Resistance” is the Palestinian euphemism for terrorism against Israelis, including the murder of civilians.

The statement continued: “In a press release issued by its information office today, Sunday, Fatah emphasized that the Palestinian people will not leave Jerusalem alone against the occupation forces and its settler herds.”

Itamar Marcus, director of Palestinian Media Watch, commented: “Although proclaiming in English to the international community that it rejects terror, PMW has documented repeatedly that in Arabic, the P.A. and Fatah routinely support, honor and encourage terrorists.”