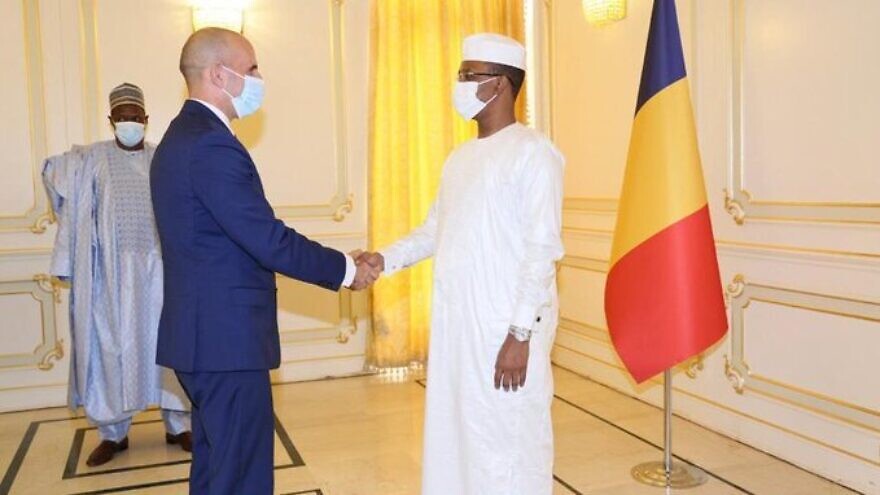 (May 18, 2022 / JNS) Israel’s new ambassador to Chad presented his credentials to the country’s president, Mahamat Idriss Deby Itno, on Wednesday, according to the Israeli embassy in Senegal.

Ben Bourgel is the first Israeli envoy to Chad in 50 years, the embassy noted.

“This marks an important benchmark in the deepening of the relations between Chad and Israel since their resumption in 2019,” said the embassy in a statement. “Ambassador Bourgel and his team will work to strengthen the cooperation between the two countries in areas of common interest such as climate changes, agriculture, water management and health.”

Israel first announced that diplomatic ties with Chad would be revived in November 2019, following a visit to Jerusalem that month by then-President Idriss Deby to Jerusalem—the first such visit by a Chadian leader. Israel confirmed a diplomatic rapprochement with the Muslim-majority country in January of that year. Idriss Deby was killed in April 2021 fighting rebels in Chad, his son, Mahamat Idriss Deby Itno, now serves as the president.

According to a report by Reuters at the time, former Prime Minister Benjamin Netanyahu used a visit to the Chadian capital to stress mutual interest in confronting Islamist insurgencies. At a joint press conference, Netanyahu said attacks by Boko Haram in Kenya were a demonstration of the need to cooperate on security.

“We are happy to know that a Muslim-majority country is connected through diplomatic ties to Israel,” Netanyahu said at the time.