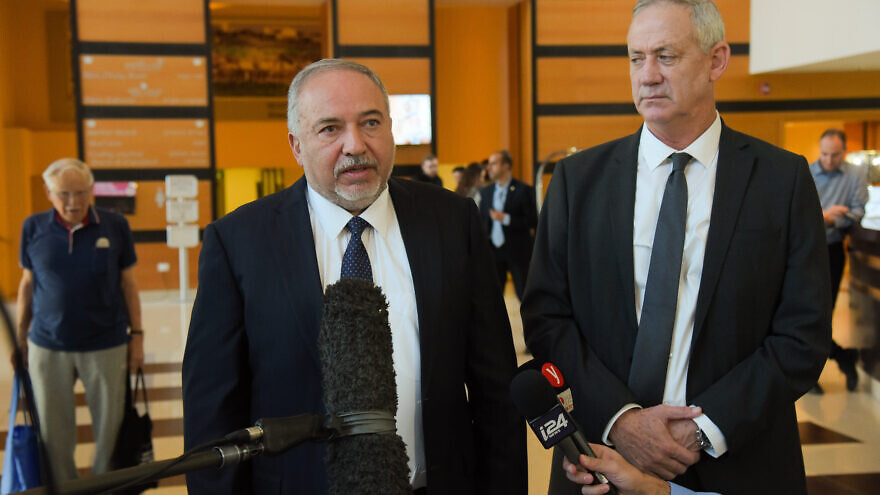 Blue and White Party chairman Benny Gantz and Israel Beitenu Party chairman Avigdor Lieberman give a joint statement to the media after a meeting for negotiations towards building a new government, at the Kfar Maccabiah Hotel in Ramat Gan, on Nov. 14, 2019. Photo by Avshalom Sassoni/Flash90.
Spread the word.
Help JNS grow!
Share now:

Lieberman’s conditions include the delegation of the operation of public transportation and businesses on Shabbat to local authorities; a haredi conscription bill; allowing civil marriage in Israel; allowing local rabbis to oversee conversions; and setting pensions equal to at least 70 percent of the current minimum wage.

Separately on Sunday, the Knesset increased Gantz’s security detail after various death threats against him since Israel’s election last week were deemed credible, the AP reported.

Israeli Prime Minister Benjamin Netanyahu’s Likud Party won more votes than Blue and White, but still does not have a 61-seat majority required to form a government.

According to Gantz, a man tried to assault him on Saturday evening as he arrived at a speaking engagement. The Blue and White leader also claims that Netanyahu supporters have been threatening him online, citing posts calling for him to be murdered just like former Prime Minister Yitzhak Rabin, who was assassinated by a Jewish ultra-nationalist in 1995.