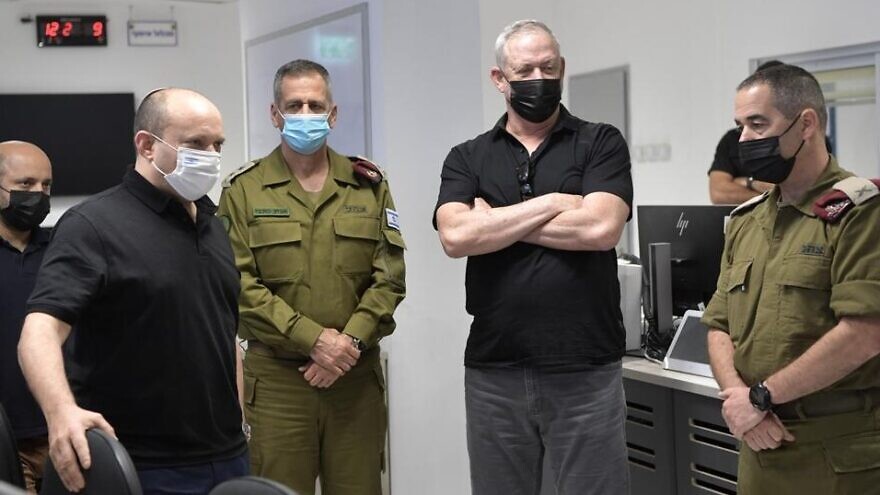 (August 17, 2021 / JNS) Israel’s Defense Minister Benny Gantz said during a tour of the Israel Defense Force’s Gaza Division on Tuesday, held jointly with Israeli Prime Minister Naftali Bennett, that the Jewish state will respond to threats at a time and place of its choosing.

Gantz made the comments one day after a Palestinian terror faction, believed to be Palestinian Islamic Jihad, fired a rocket at southern Israel.

IDF Chief of Staff Lt. Gen. Aviv Kochavi and head of the IDF Southern Command Maj. Gen. Eliezer Toledano joined the other leaders, stopping by an Iron Dome battery and speaking with battalion commanders there.

“Following ‘Operation Guardian of the Walls,’ we announced that the status quo will be no longer,” said Gantz. “We reserve the right to react forcefully [against any threat] in the time and place that we determine.”

“Our only interests regarding the Gaza Strip are quiet, security and the return of our boys home. We are not the enemies of the Gazan people. The real enemy is Hamas, which is taking Gaza residents hostage. We will facilitate humanitarian relief initiatives funded by Qatar and other actors, provided that the money will reach the right places. Israel is determined to defend itself and will know how to do it.”

Bennett said the purpose of the visit was to examine IDF and Southern Command preparedness, noting that “they are indeed suitably ready.”

“From our perspective,” he added, “the address in Gaza is Hamas. Not rebellious groups and not anyone else, but Hamas.”