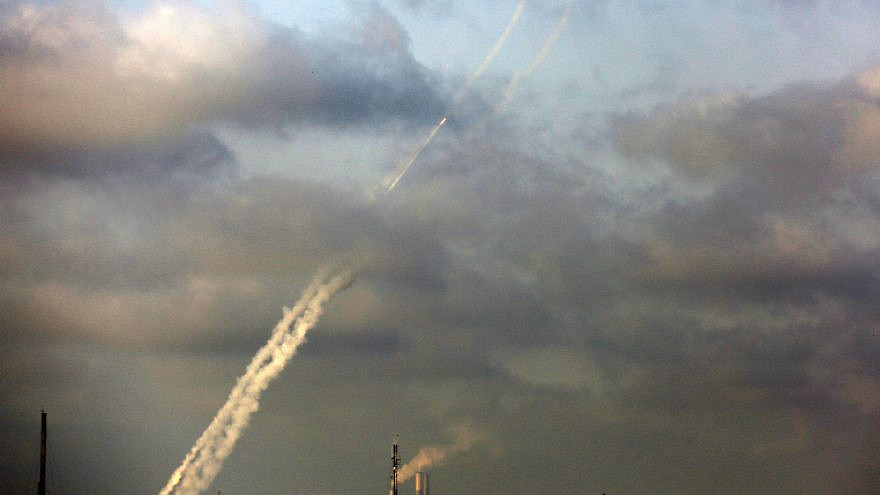 (May 11, 2021 / JNS) Gaza terror factions have fired more than 200 rockets at Israel in the past 24 hours, the Israel Defense Forces said on Tuesday.

The IDF struck more than 130 targets in Gaza in response, including strikes on 15 terror operatives, in what the military is calling “Operation Guardian of the Walls,” the IDF said in a statement.

Ashkelon came under heavy fire on Tuesday morning, with tens of rockets being fired at the city within 30 minutes. A 40-year-old man suffered serious to moderate injuries, his wife, 39, moderate injuries and their two children light injuries when two residential buildings sustained direct hits, according to Ynet. Two additional civilians in Ashkelon, ages 63 and 82, were lightly injured in the attacks.

Many of the projectile attacks have targeted Sderot and its surrounding area near the Gazan border, according to the IDF.

International IDF spokesman Lt. Col. Jonathan Conricus said on Tuesday that the rockets were launched from densely populated urban areas in Gaza. The Iron Dome air-defense system has intercepted “slightly above 90 percent” of the projectiles heading to populated areas, he added. The Iron Dome air-defense system “is saving Israeli lives every minute, and under significant strain,” said Conricus.

Addressing the strike on Ashkelon, the IDF spokesman said, “We are doing everything possible to limit harm to Israeli civilians. We have enhanced Iron Dome batteries in the south, both in terms of radars and interceptors.”

Conricus reported that one-third of the rockets fired by Hamas and Palestinian Islamic Jihad have fallen short, exploding inside Gaza, describing the figure as “abnormally high” compared to past escalations.

“Perhaps it is indicating poor quality. The rockets falling short are causing casualties and damage inside the Gaza Strip,” he said. “We are aware of Hamas and Palestinian Islamic Jihad efforts to nurture a narrative of damage to noncombatants, done by Israel. This is not true. We take every effort to limit harm to non-combatants.”

Hamas began its assault on Israel with a rocket attack on the Jerusalem area and on southern Israel on Monday. The last time that Jerusalem came under rocket fire was during “Operation Protective Edge” in the summer of 2014.

Gazan terror groups have “a substantial arsenal capable of reaching large parts of Israel, including Jerusalem and Tel Aviv,” said Conricus. “The fact that they decided to fire [at Jerusalem] is a very grave event.”

Conricus said the IDF is prepared for a further escalation, adding that troops have been ordered to be ready for “various scenarios.”