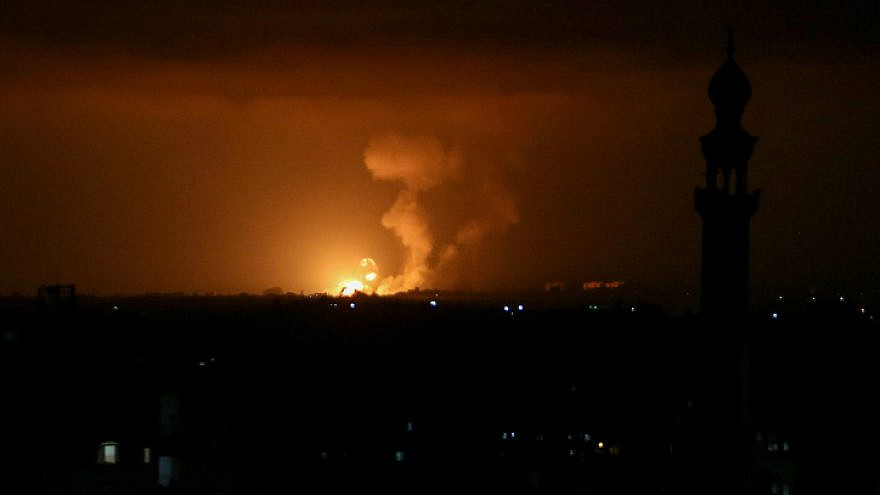 (May 11, 2021 / JNS) The Israel Defense Forces said on Tuesday that it struck more than 130 military targets in Gaza, as part of “Operation Guardian of the Walls,” launched on Monday in response to a Hamas rocket assault on Israel.

International IDF spokesman Lt. Col. Jonathan Conricus said that many of the military’s attacks on targets were planned “well in advance,” using “systematic intelligence and targeting. We are now executing strikes on targets that we detected, researched and analyzed for quite some time.”

The IDF estimated on Tuesday morning that it had killed 15 Hamas and Palestinian Islamic Jihad operatives since the start of hostilities.

Conricus added that the IDF has received reports that some of the armed enemy personnel were killed in an airstrike on a tunnel inside Gaza.

With the start of hostilities, armed operatives go into hiding, often underground—underneath or within civilian infrastructure, he said, “making it challenging to strike them. But we are targeting them.”

Some of those hit were involved in the firing of rockets, while others were engaged in other types of military activity.

Commenting on reports of civilian casualties in Gaza, Conricus said that the IDF is looking into those and could not yet confirm or deny its involvement. This was in reference to Gaza’s Health Ministry claiming that 20 people, including nine children, were killed in Israeli strikes.

“We are aware of Hamas and Palestinian Islamic Jihad efforts to nurture a narrative of harm done by Israel to noncombatants. That is not true. We take every effort to limit harm to noncombatants,” he said, adding that around one-third of the rockets fired at Israel since Monday have fallen short, exploding inside Gaza, causing casualties and damage inside the Strip.

The military spokesman divided targets in Gaza being struck by the IAF into four types: Rocket- and weapons-manufacturing facilities; storage facilities for the rockets and weapons; training facilities; and military bases in compounds that dot the Strip.

Special targets hit by the IAF included a Hamas intelligence operations center in southern Gaza, two terror-attack tunnels near the Israeli border that were in different stages of preparation and the home of a Hamas battalion commander in a high-rise building.

Unlike “Operation Protective Edge” in 2014, during which Israeli territory was infiltrated by dozens of cross-border attack tunnels, today the IDF has an underground sensory barrier that runs along the 65-kilometer (40-mile) Gaza border, automatically detecting and alerting the Israeli military to the presence of tunnels. The barrier has enabled the detection and destruction of 20 cross-border tunnels dug by Hamas and Palestinian Islamic Jihad since 2017, said Conricus.

The situation today is “totally different” from that of 2014, he said, concluding, “We see Hamas’s attack against Israel as a very severe one that will clearly not go unanswered. In terms of our posture, we are in the early stages of our counter-strikes. They will continue.”